24kGoldn is in a good mood. As he bounds through the studio door for his Sole Mates photoshoot and interview, full of youthful exuberance even after having to walk up six flights of stairs due to a broken elevator, he warmly greets everyone in the room, taking the time to learn names and make small talk.

Goldn, as his crew calls him, selected Lanvin‘s chunky, skate-inspired Curb as the centerpiece of his interview, and he came prepared: he’s lugging a silver Rimowa suitcase stuffed with a half dozen pairs. Though he’s a freshly-minted Gen Z superstar who won’t turn 21 until this fall (his birthday is November 13, 2000), he’s also a certified footwear aficionado. His love for sneakers began in middle school when a classmate’s Air Jordan 11s caught his eye and expanded through watching YouTube videos, learning more about sneaker culture through sites like HYPEBEAST (yes, he named us specifically) and taking trips to sneaker stores.

During a brisk but informative conversation days before his new El Dorado album released, 24kGoldn shared his sneaker origin story with HYPEBEAST. Though he grew up loving Jordan Brand‘s Air Jordan line and various Nike signature basketball models, sneakers eventually became a creative outlet for him. They provided him with his first business opportunity, introduced him to one of his earliest mentors, and even played a part in the genesis of his rap career: his first real song was recorded in the back of a sneaker shop. Today Goldn has a #1 record — 2020’s “Mood” — under his belt and a bright career ahead of him, but his passion for footwear is still palpable. Read on to learn about 24kGoldn’s sneaker origin story, his shifting tastes and his current love for Lanvin’s high-priced Curb. 1 of 2 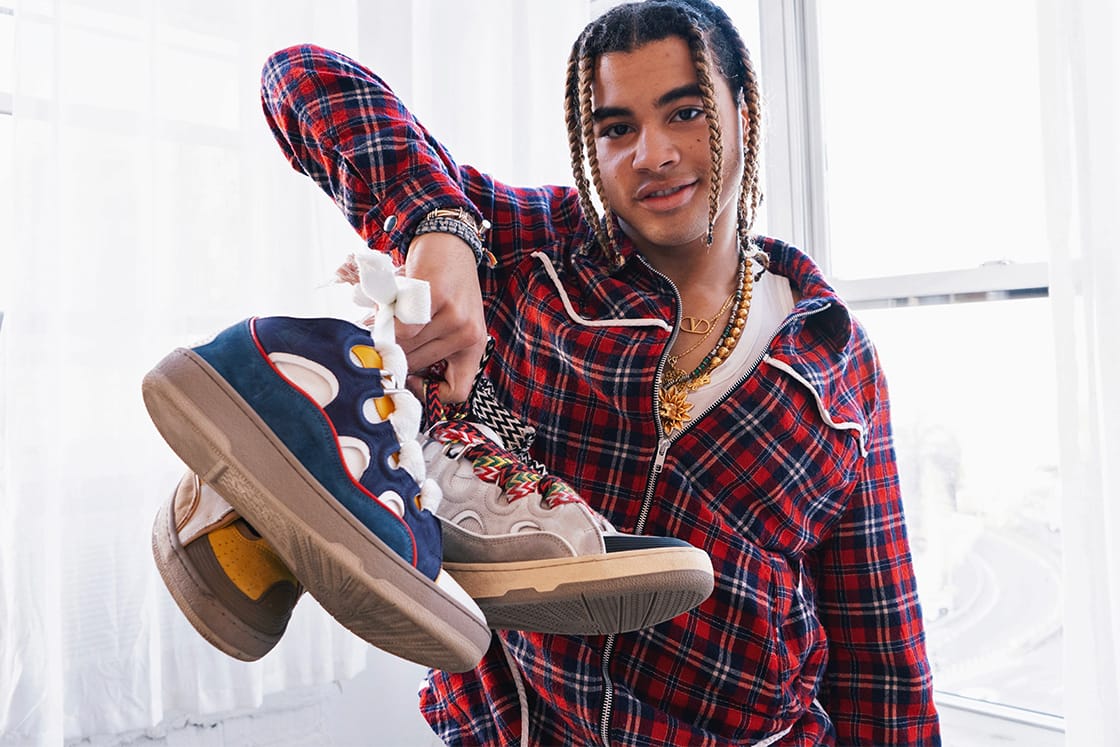 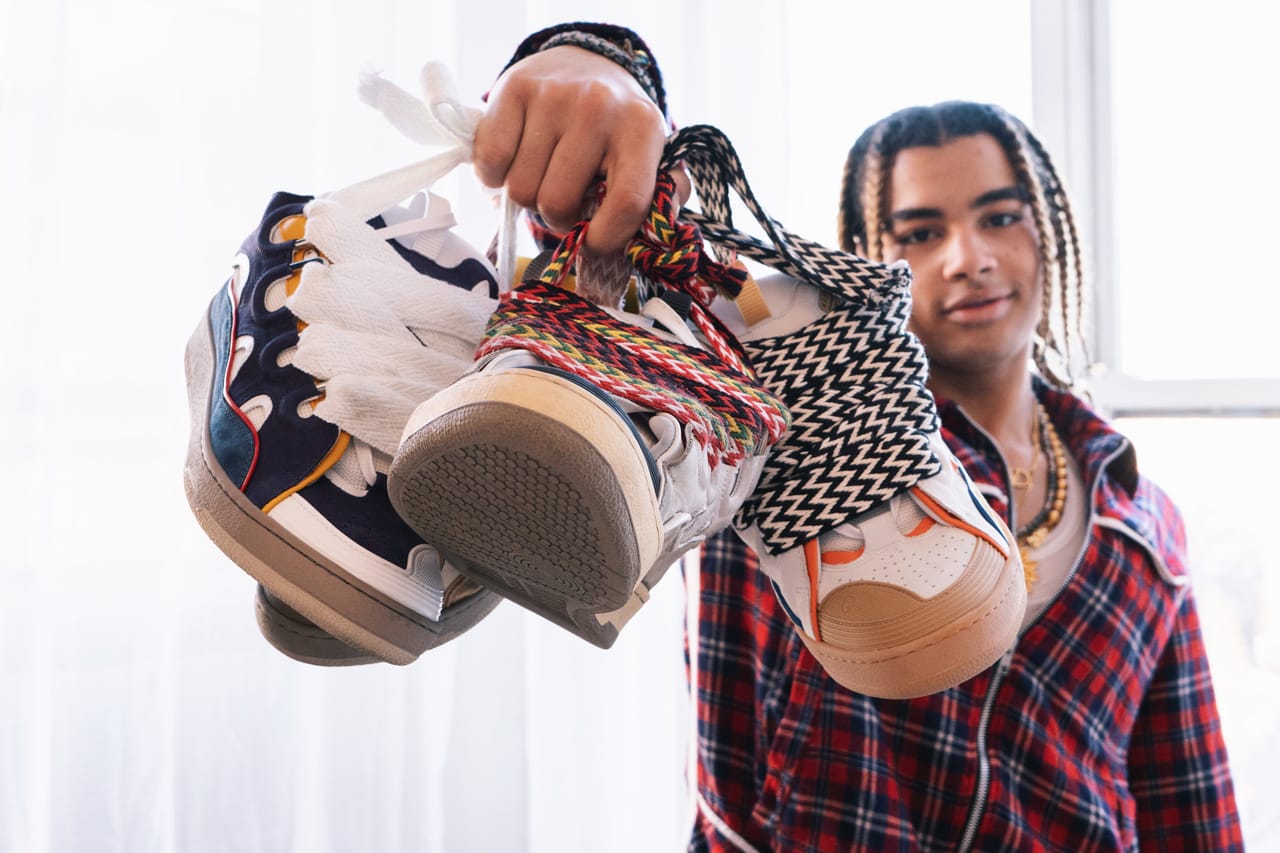 HYPEBEAST: What got you into sneakers?

24kGoldn: I distinctly remember the shoe that got me hooked: it was the Air Jordan 11 “Concord.” There was this kid in my seventh grade English class named Kimante who had a pair, and — funnily enough — I first noticed him wearing themthe week that the Air Jordan 11 “Bred” released in 2012.

I was like “yo, what the f*ck are those? Can I go to the store and get a pair right now?” He was like “Nah man, these dropped last year and my mom waited in line for them.”I did a little research, realized the “Breds” were coming out and tried to get ‘em, but I wasn’t able to. A homie of mine did though, and I was like “man, I need those.” I went to my parents and asked for a pair. They were like “what do we look like spending $185 on shoes?” [laughs]. At that point in my life, all my shoes had been from places like Ross, Big 5 or DSW.

“When I get interested in something I become a super fan of it, so I was on HYPEBEAST and all the other sneaker blogs every single day, researching Jordans and Nikes, committing every colorway to memory like they were Pokémon cards or some sh*t.”

My first pair of Jordans I ever had was actually a pair of Air Jordan 1 Mids, a black and grey joint that kinda looked like the Air Jordan 1 “Shadow” … but not really [laughs].When I got those, I was walking around my school like I was fresh as hell. That moment and that feeling was me scratching the surface. When I get interested in something I become a super fan of it, so I was on HYPEBEAST and all the other sneaker blogs every single day, researching Jordans and Nikes, committing every colorway to memory like they were Pokémon cards or some sh*t.

So you went deep down the sneaker rabbit hole, huh?

Yeah man. When I was a couple months into my research, my cousin’s boyfriend gave me a pair of the Air Jordan 6 “Lakers.” He was a size 11 and I was like a 9.5 at that time, but I didn’t care — that was my first pair of retros. Man, I was triple socking it and stuffing the toeboxes with so many tissues just to wear those joints to the movies and feel like that guy for a few hours even though nobody could see me [laughs].

Were you active in Facebook sneaker groups at the time? I recall those being big in the early 2010s.

Yes. I’m from the San Francisco area and the biggest Facebook sneaker group there was called Bay Area Sneakerheads. After I wore those “Lakers” a few times, I was like “f*ck, I don’t want to wait to grow into these. I want something in my size.” I put ‘em up in that group looking to trade for something that would fit me, and this guy hits me to say he’s got a pair of the Air Jordan 12 “Obsidian.” They looked good in the pictures, but I didn’t realize he’d hidden a lot of the flaws they had.

“I’d buy beat shoes, restore them myself and sell them on Facebook groups, or fix up people’s shoes for money. That’s how I first got bread to buy shoes for myself.”

Oh man, you got finessed! That happened to everyone once or twice back in the sneaker group days — it was a learning experience, right?

Bro! I have my fair share of Ls in the sneaker world [both laugh]. There was a positive side to it though: I went on YouTube and learned how to restore sneakers. I remember ordering Angelus paint, getting some paint thinner, teaching myself all the tricks of bringing a sneaker back to life.

After a while, I was like “damn, I’m getting pretty good at this.” That actually led into a business opportunity: I’d buy beat shoes, restore them myself and sell them on Facebook groups, or fix up people’s shoes for money. That’s how I first got bread to buy shoes for myself. 1 of 2 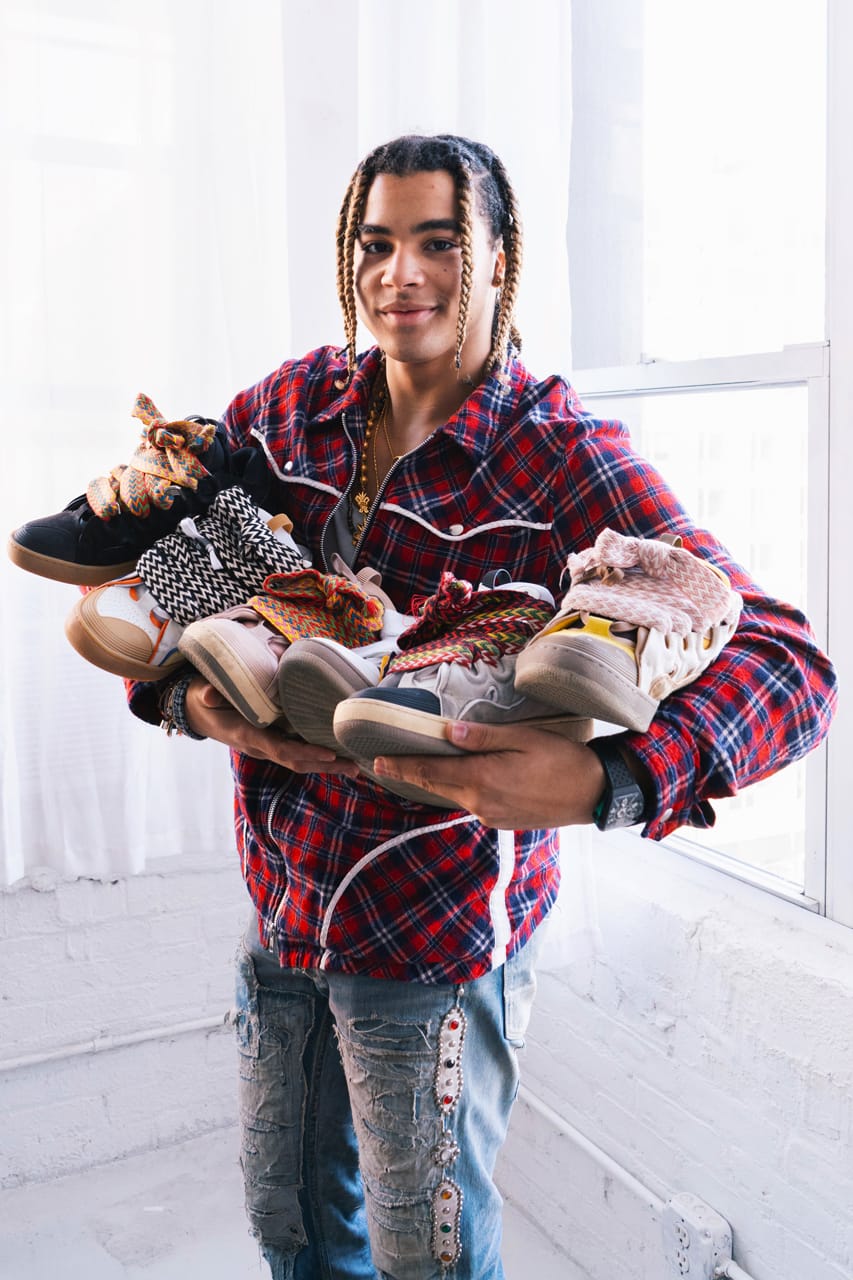 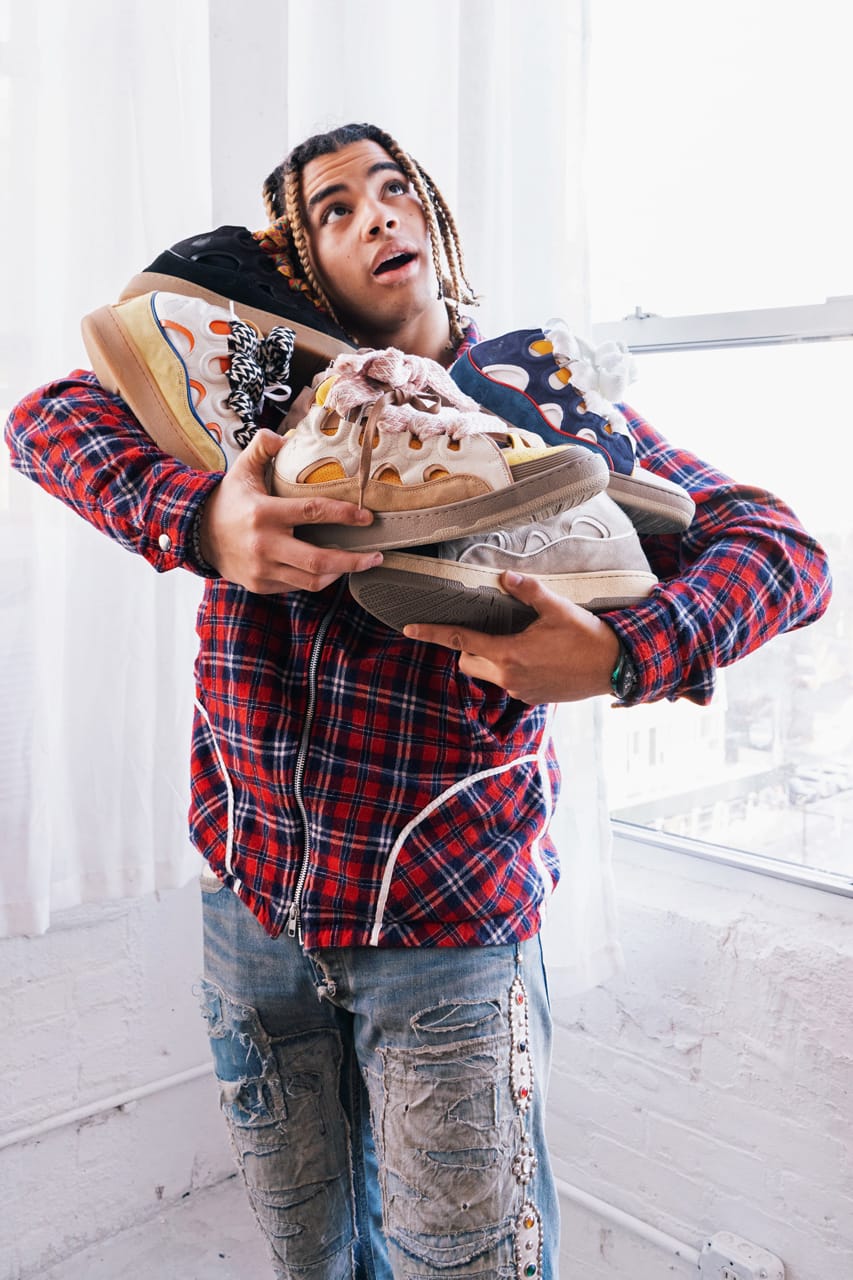 I heard that you used to record music in the back of a sneaker boutique. Tell me about that experience.

There’s this legendary sneaker and clothing boutique in San Francisco called Dream Team SF. The first time I went in there was on my 13th birthday, and it blew my mind. This is back when Nike Basketball was really popping, and they had all the crazy LeBrons, Kobes, KDs, plus stuff like OG Air Jordan 3s and Air Jordan 4s.

The owner of the store is this dude named Paper Boy, and when I first met him he was wearing the Air Foamposite One “Galaxy.” I was like “man, I just met a f*cking sneaker god!” I’d never seen those shoes in person before and he was wearing them casually on a random Thursday. That blew my mind.

“I was a kid, fully involved in something I was really passionate about.”

We chopped it up a bit that day, and as I got older we established a really great relationship. I’d head there after school to hang out and help out customers. Paper Boy would take me to SneakerCon and DunkXChange and let me sell my shoes at the Dream Team SF booth. In return, I’d help him out over the course of the event. I was a kid, fully involved in something that I was really passionate about. I got a lot of free game on life in that shop too.

It sounds like Dream Team SF was a “community center” for you.

Exactly, my home away from home. Paper Boy helped me get into music too. As I went through high school, I’d be freestyling with all my friends in the hallway, rapping over YouTube beats, that kind of stuff. They got kinda tired of it, but Paper Boy suggested that I make music for real so I could be poppin’ at school [laughs]. He actually had a small studio in the back of Dream Team, and he opened it up to me and helped me write my first real song. I put it on SoundCloud and sent it to everyone at school the next day. That was really the beginning of my music career. 1 of 4 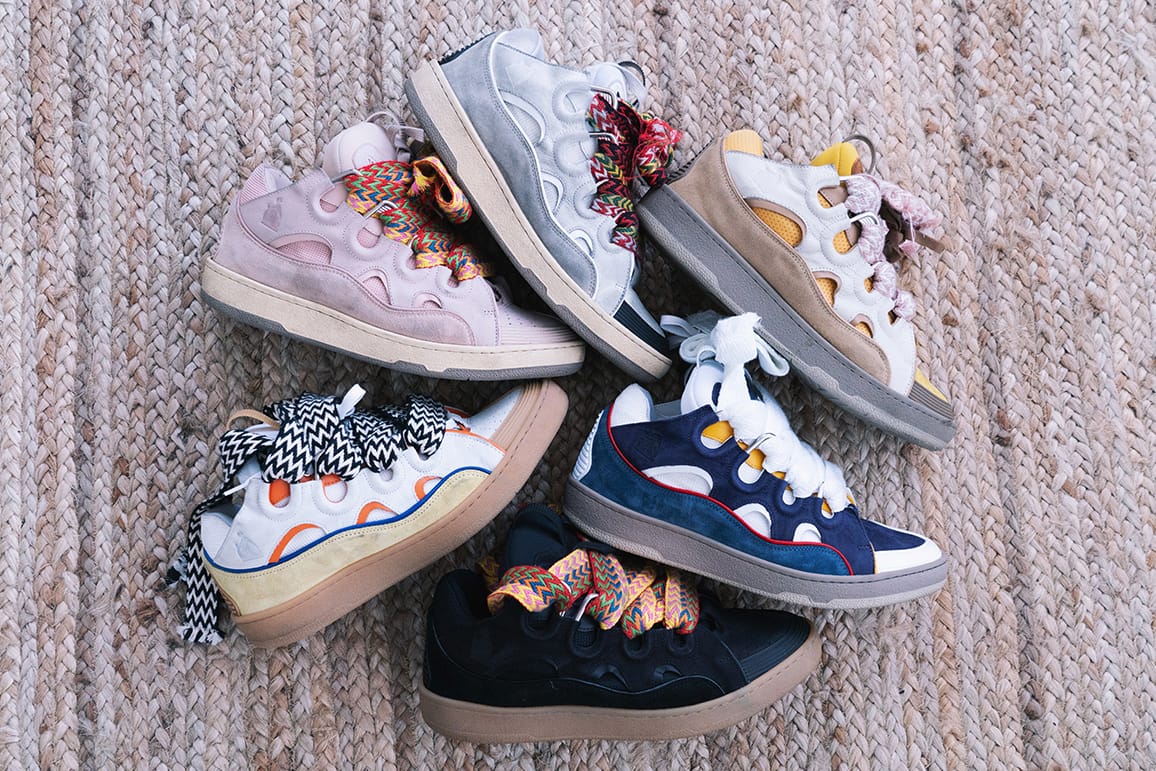 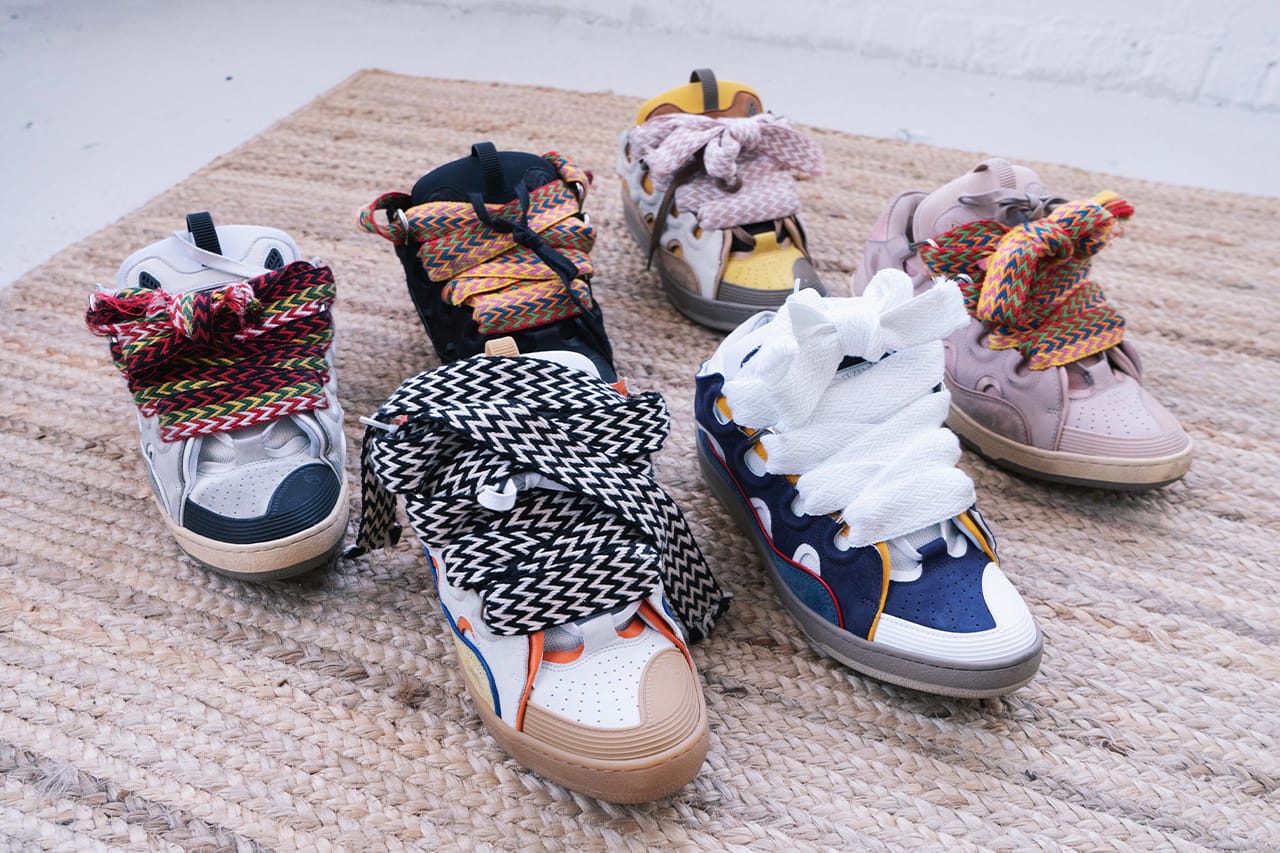 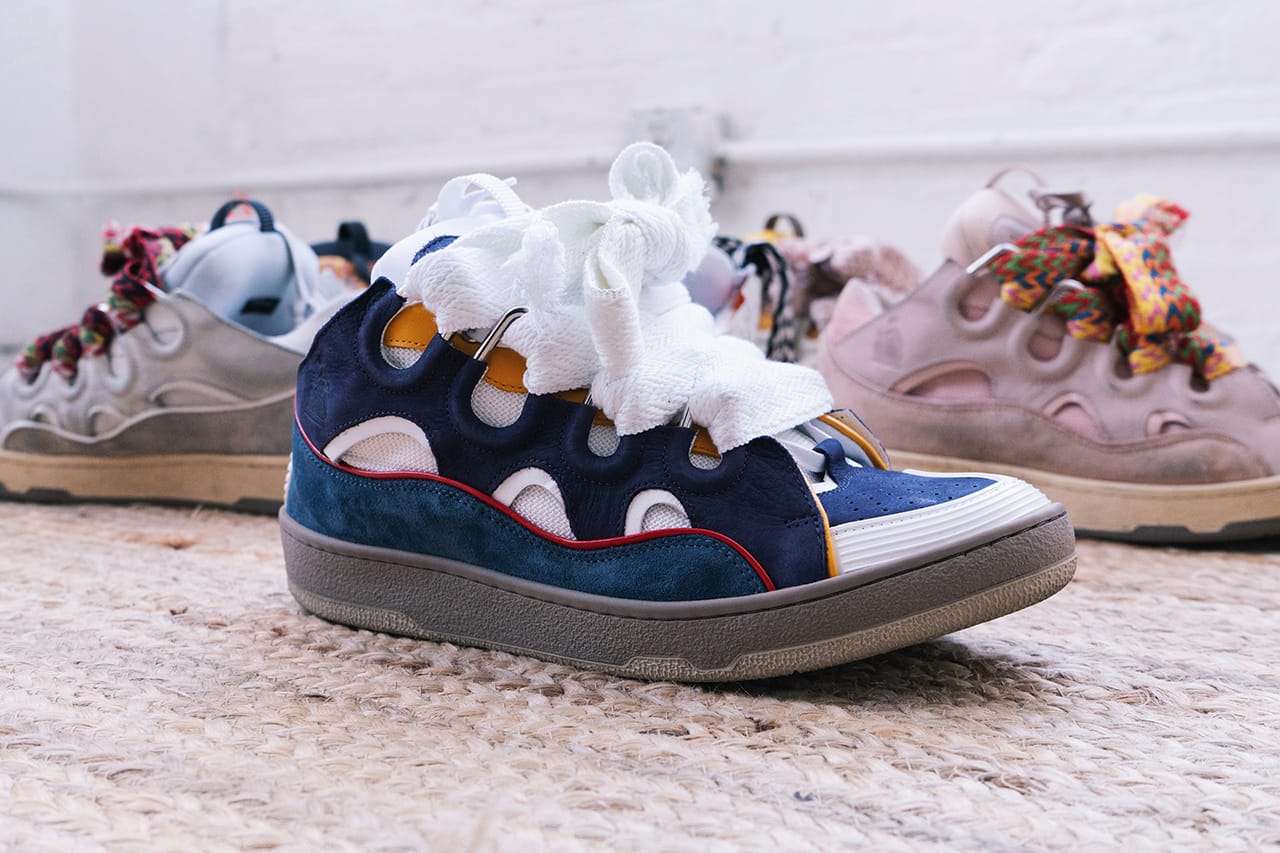 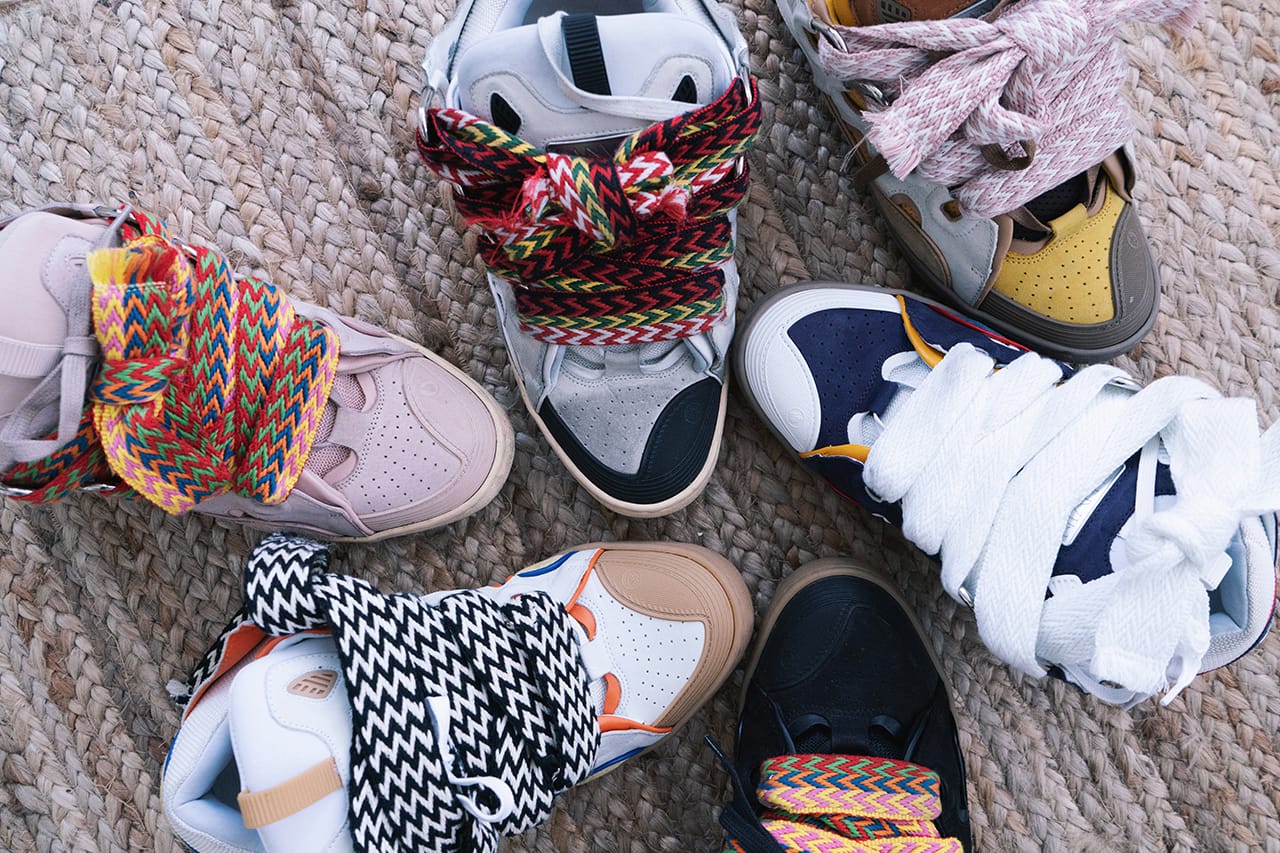 Now that you’re getting older, rapping and starting to get paid, let’s talk about designer sneakers — the Lanvin Curb to be specific. Did you aspire to kicks of that nature as well as Jordans when you were growing up, or was it a style you came to later in life?

I was really out there trying to learn about every shoe I could as a kid, and I think the first brush I had with designer sneakers was through Celebrity Sneaker Watch, if you remember that series.

Yeah man. The first high-end shoe I distinctly recall seeing on there was Kanye West’s Louis Vuitton Jasper, then the Balenciaga Arena. At first I was skeptical, like “They’re not that comfortable. They’re really expensive. Why does everyone like these shoes so much?” Eventually I realized that you could learn from who wore those shoes and how they wore them, and how many of them were remixed or elevated takes on classics.

[The Lanvan Curb is] the ultimate version of the pairs I had to buy at Ross for $34.95, the DC and Osiris joints.”

So what about the Curb draws you to it as opposed to some of those other pairs you mentioned? Is it the chunky shape, that skateboarding inspiration?

Man, all of that. It’s like the ultimate version of the pairs I had to buy at Ross for $34.95, the DC and Osiris joints [laughs]. The wide laces and fat tongue are super nostalgic, but from a current-day standpoint it looks really good with the type of pants I like to wear, its materials are really high quality and the colorways are super sophisticated. These days, it’s everything I want from a sneaker. I’m the Lanvin Don now, so I gotta stick with that, you feel me?

Ask Lanvin Beverly Hills, I was the first rapper wearing these! Before Lil Uzi Vert, Travis Scott, all those guys! [laughs].

Do you still have a soft spot for any of those models that inspired the Curb? The Osiris D3 comes to mind.

Yeah man, those are cool. I really liked the SRLo, those joints A$AP Rocky and Dave Mayhew did with Under Armour a few years ago. The DVS Militia Boot is cool too, but nothing tops the Curb in my book. Not even Heelys — if Lanvin put a wheel in their shoes, it would be game over.

Why are sneakers important to you?

They’re an extension of yourself. Your sneakers say a lot about you: what you value, how you take care of yourself. I love sneakers and fashion because they’re another form of art for me. I can express my soul through how I dress and what shoes I wear.
Source: Read Full Article