Should Bounty really be banned? Sweet has been axed from special edition Celebrations tins – but 80% of people say it’s their favourite

Since Mars Wrigley has announced that it has banned Bounty bars from its Celebration tubs the country is divided over one single question: are Bountys really that bad?

Today it was announced that Bounty-free tubs will be rolled out in selected Tesco stores across the country, allowing those who hate the coconut sweet to avoid it.

People have shared their outraged at the news  on Twitter, proving that there is love for the Bounty after all.

Statistics shared by Mars Wrigley with Femail reveal that only 22 per cent of people said the Bounty was their least favourite Celebrations pick, which means that a whopping 78 per cent of people have nothing against the coconutty treat.

Meanwhile, 95 percent of people love the Galaxy, making it the most beloved sweet out of the Celebration tubs. 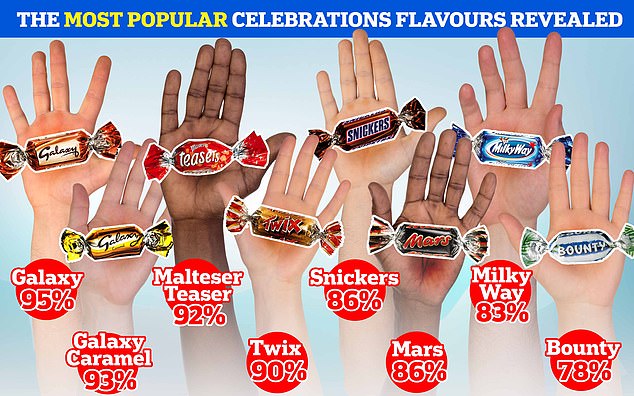 Statistics shared by Mars Wrigley with Femail reveal that only 22 per cent of people said the Bounty was their least favourite Celebrations pick, which means that a whopping 78 per cent of people have nothing against the coconutty treat

Mars Wrigley asked people to answer the question: ‘Which chocolate is your least favourite in the Celebrations tub.’

83 per cent of people said they liked the Milky Way, making it the second most disliked sweet of the bunch, closely followed by Mars and Snickers bars, which both scored 86 per cent.

Meanwhile, the Twix is the third most liked sweet in the tub, with 90 per cent of people saying they liked the treat.

95 per cent of people said they liked the Galaxy Caramel, making it the second most liked sweet. 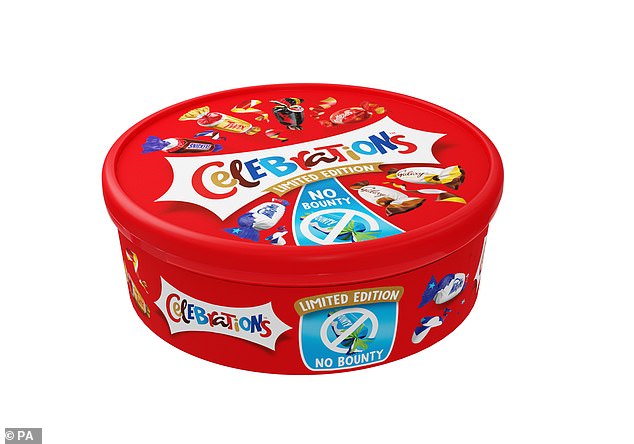 Statistics shared by Mars Wrigley with Femail reveal that only 22 per cent of people said the Bounty was their least favourite Celebrations pick, which means that a whopping 78 per cent of people have nothing against the coconutty treat. Yet Mars Wrighley has rolled out Bounty-free tubs, pictured 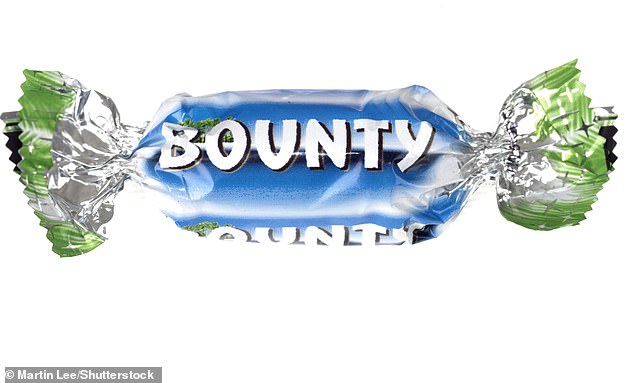 Are Bounty bars that bad? 80 per cent of people have nothing against the sweet, but Mars Wrigley decided to keep their out of their tubs this year

People took to Twitter to share their strong reaction after Mars Wrigley announced it was rolling out Bounty-free tubs this Christmas.

‘Why would you remove the Bounty when the disgusting and pointless Milky Way exists? What self respecting person resorts to eating the Milky Ways? I feel personally attacked,’ one said.

Mail Plus readers give their verdict on the great Bounty debate!

A poll of Mail Plus readers has intriguingly revealed that Bounty might not be the most hated Celebration after all.

That distinction was won by Milky Way, which 22 per cent voted their least favourite chocolate – while Bounty came second on 20 per cent.

Here’s how readers ranked the chocolates in the tub in a vote on their least favourite variety.

To cast your vote, visit MailPlus

‘Why do you [people] hate Bounty so much? It’s such a lovely chocolate bar… like, how can you not like coconut,’ another asked.

One said: ‘half the people who hate on bounty have never tried it but follow the crowd.

However, some sided with the decision to ban the sweets, with one saying: ‘Stop pretending Bounties are anything other than landfill.

Mars Wrigley announced the special tubs of the chocolates would be available at select Tesco stores in the run-up to Christmas.

Revellers who do not care for the smooth coconut and chocolate treats can swap normal tubs bought in stores with Bounty-less ones for free, from November 8.

It comes as more than a third of Britons admitted they don’t want Bountys in their festive red containers.

Shoppers will be able to get their hands on the boxes at 40 special Christmas Market pop-ups in Tescos around the country.

For these limited-edition tubs, additional Mars, Snickers, Milky Way, Galaxy and the all-time favourite – Maltesers – will be added in place of the Bounty bars.

Tesco’s Christmas Market is a pop-up roadshow, starting in Manchester on Tuesday November 8 and making its way down the country, closing on December 18 at Gallions Reach Extra in London.

Shoppers who cannot make it to these locations can enter a competition on Tesco’s website to win a Bounty-free tub.

It comes as Mars Wrigley debuted the Bounty Return Scheme in 2021, where shoppers could swap unwanted chocolates for Maltesers after the festive period.

Emily Owen, Mars Wrigley’s head of Celebrations Festive Cheer, said: ‘Christmas is the time for giving – but it seems this year, the British public are keen for us to take away… Bounty.

‘Last year, we gave customers the opportunity to return their unwanted Bounty chocolates. Now, off the back of public demand, we’re trialling taking them out of the tub altogether.

‘You don’t know what you’ve got until it’s gone! And to those loyal (and secret) Bounty lovers out there, there’s still a chance they’ll make a return after the trial.’