For all the talk of greater diversity in the arts, it is still extremely rare to see a pregnant woman on stage. In fact, when she was studying at NIDA, Lucy Goleby – who plays Ginny Potter in Harry Potter and the Cursed Child – was told she would have to choose between motherhood and her career. 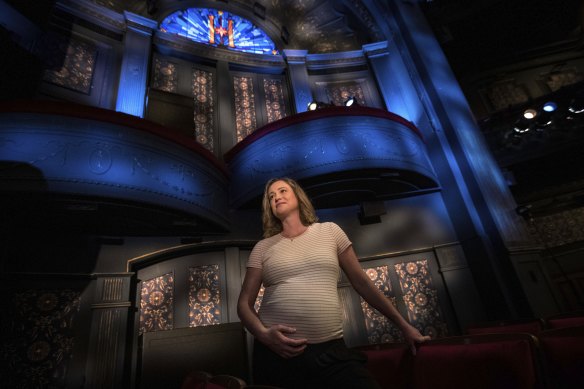 Goleby has proven that is no longer the case: she has performed in the magical stage show as Harry Potter’s wife while pregnant twice, in an average of eight shows a week since the production began in February 2019 (lockdowns aside).

The physicality of the role has been modified in the past month, as at 32 weeks “solidly pregnant”, she says even reaching down to pick up a dressing gown has been a challenge. Even so, the show’s extraordinary special effects have remained on display, thanks to the determination of the producers, cast and crew.

As she prepares to hang up her wand this Saturday, Goleby is proud to have shown what can be achieved, to dispel old-fashioned notions about what is possible. Her approach when she found out she was pregnant the first time around was, “Let’s not shy away from this, let’s dive into it”.

“I said to [the producers], ‘I don’t think we should try to hide that I am pregnant, we don’t often get the opportunity to see pregnant actors on stage’. We talk a lot in this show and in the industry about how diverse are we being on our stages and in our stories. That idea that, ‘If you don’t see it, you can’t dream it’. It’s a really big conversation in our industry, how inclusive are we being in terms of who we see on stage?” she says.

To her mind it was important to set this precedent; she can’t recall another instance in which an actor has remained in a long-term production during pregnancy and returned once the baby is born. 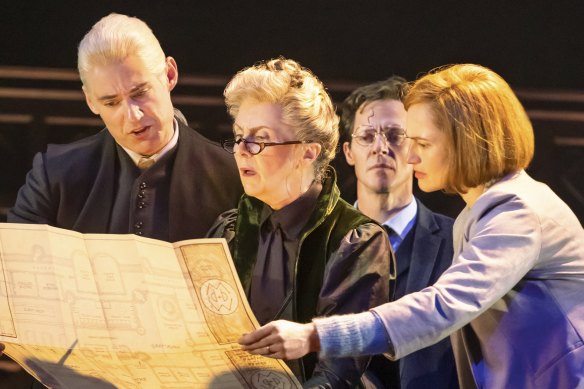 “What does it mean to have a pregnant woman on stage, what does it mean to be a breastfeeding mum? It was sensational that this show afforded those opportunities – and then to be able to do it twice,” she says, adding she was five months pregnant when the pandemic began.

When theatres were able to open again and Harry Potter returned to the stage, her daughter Mair was six months old. Goleby was breastfeeding fulltime, which posed a few challenges. The costume department organised a feeding bra and made sure outfits were breastfeeding friendly: she would go off-stage and express milk for 15 minutes and then go back on. “Everybody was committed to helping me make it work,” she says, adding that the Michael Cassel Group, which produces the show, has been hugely supportive.

In one memorable performance, a baby was crying offstage. As anyone who has breastfed would know, your body can respond even if it’s not your baby, “so we had to make sure I wasn’t leaking onstage,” Goleby says.

Sadly, she says, “Dr Footlights” didn’t help when it came to managing morning sickness. In theatre circles, actors speak about the idea that if you have a cold, your nose will stop running once you walk onstage but the minute you walk off, it will start again. “It turns out pregnancy does not respond to Dr Footlights. Both times I had 24/7 constant nausea, so that being on stage is not fun.”

As Goleby prepares to make her exit call this weekend, she’s been reflecting on what the show has taught her. A quote from her character Ginny on her dressing room wall reads, “That’s the silver lining I’ve been looking for”.

“There is a through line in the books and in the play, [Ginny] is always looking for the best in people and in situations,” Goleby says. “Being hopeful is not a weakness, it’s a great source of strength, to look at a situation that seems dark and dismal and powerless, it is the hope that will lead us through.”

Harry Potter and the Cursed Child is currently playing at the Princess Theatre, Melbourne.