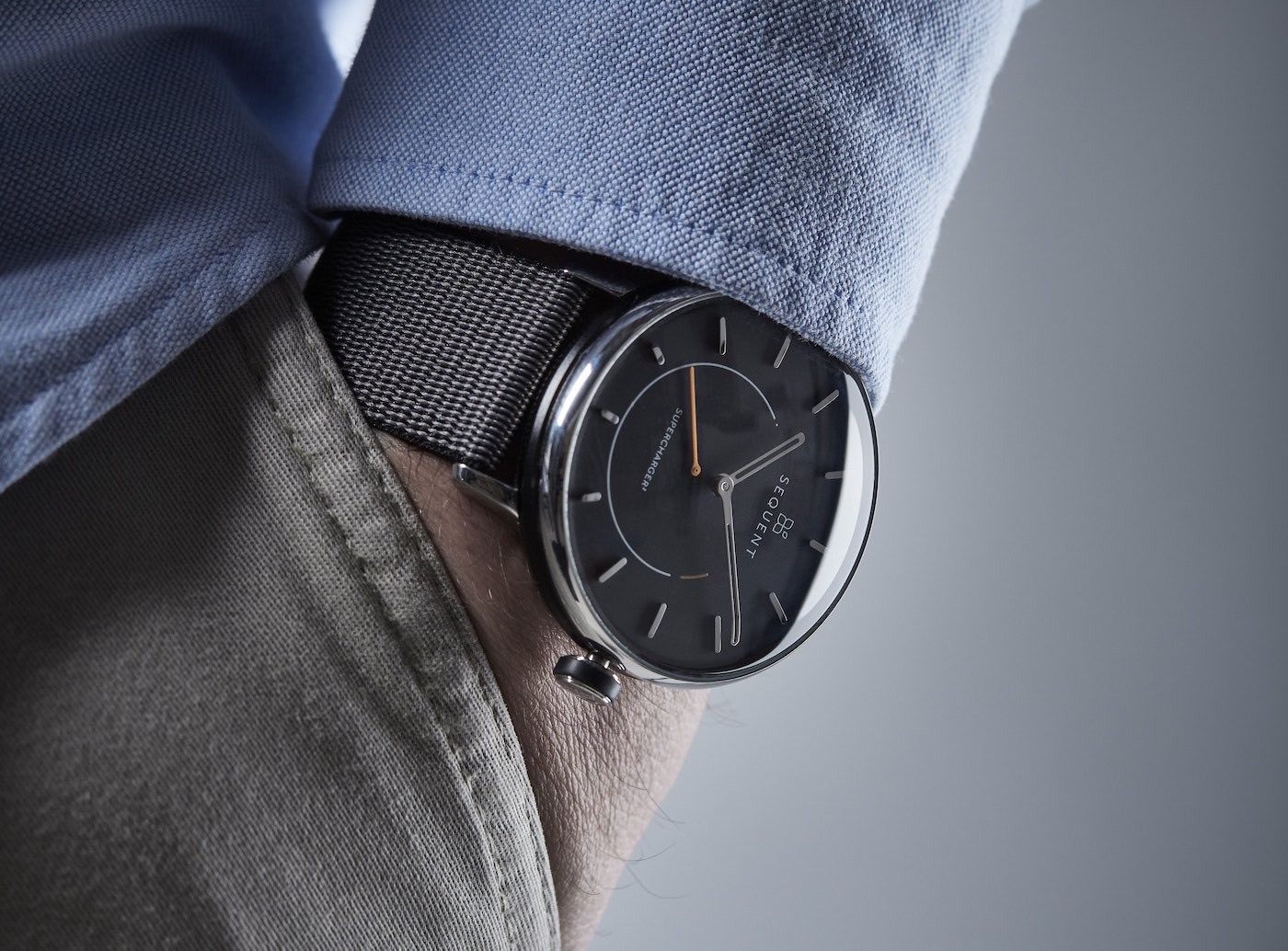 Smartwatches are great but, in my mind, they have two fundamental drawbacks.

Number one is the fact you’re looking at yet another screen, albeit a small one tucked away on your wrist. The second, is that it’s just another battery to charge.

The avoidance of both these drawbacks is what Sequent want you to appreciate with its latest version of the SuperCharger smartwatch.

The SuperCharger 2 utilises kinetic energy through a winding mechanism, to keep the battery powered indefinitely.

‘The more you move, the more you charge. Infinite automatic, self-charging’ proclaims Sequent’s Kickstarter page, where the watch was launched.

Unlike an Apple Watch Series 6 or a Fitbit Sense, there’s no digital display or raft of sensors to power (although Sequent has built a variant with a heart-rate sensor) which saves on the power consumption.

Instead, you have an analogue watch face with an hour and a minute hand alongside a third hand on a small dial that measures activity. That can be toggled between steps taken, calories burned or distance travelled.

Sequent is a start-up from Switzerland and the design of the watch has all the hallmarks of timepieces from that country. The circular case measures 41.5mm in diameter and 12mm in thickness. There’s a single crown on the right hand side that you use to put the SuperCharger 2 into ‘sport mode’ as well as pair it with your phone.

There are different colours available: our review unit was Onyx Black, but there’s also Sapphire Blue and a Transparent version that costs a bit more. Sequent has plenty of different straps to choose from, including rubber, leather and a plastic one made from recycled ocean waste.

The initial Sequent SuperCharger launched at £359, but the start-up has stripped back a few things to try and get the price down. There’s no on-board GPS for a start, so you’ll need to take your phone with you (and keep the app open) if you’re heading out for a run or a cycle. It also lost the second dial (which was used to display battery level) and so a direct translation of the Swiss Franc cost gives the SuperCharger2 an asking price of £314 for the Premium version.

That’s not an insignificant sum to part with, so how does the SuperCharger2 fare when it comes to real-world smartwatch usage?

I immediately liked having a round, analogue face to tell the time with. It’s always on and there’s no issues with raise-to-wake. And so far, after wearing the SuperCharger2 for two full days, the battery level (indicated in the app) hasn’t dropped below 95%.

In terms of accuracy, the SuperCharger2 seemed to be in the ballpark. I tested it against a Fitbit Charge 4 activity tracker on a lunchtime walk. The Sequent told me I took 2,878 steps on the 37-minute walk, compared to 4,126 on the Fitbit.

A bit of back-of-the-napkin maths based on the assumption I walk around 4.5kph and take 2,000 steps every 20 minutes would equal 3,700 steps, right? But, what about stopping to cross the road, dawdling, swinging one arm more than the other, turning around or putting a hand in my pocket? Occasional tree cover meant I lost the GPS signal as well.

That feeds into the basic caveat with any form of activity tracking: nothing is perfect. What’s more important is that the SuperCharger2 is consistent with itself – so you can at least base your activity level on a reliable metric. The final tally for that day clocked in at 11,266 steps from the Sequent and 10,374 steps from the Fitbit.

Now, there are a couple of drawbacks to be aware of. There’s no way to mechanically shift the time on the watch itself, so you need to sync with your phone if you’re crossing time zones or adjusting for daylight savings.

Also, the means of entering sport-tracking mode is a little convoluted. It requires a couple of seconds long-press on the crown and then three jabs on it in quick succession. A tiny LED on the watch face blinks purple to let you know you’re up and running.

This corresponds to the app which, in my experience, was slow to sync and almost always required me to double-press the crown to enter a direct connection manually and give me my information.

It’s not yet at the level of Apple Health or Fitbit which gives you updated info seamlessly and swiftly.

Furthermore, you can’t break your activities down into categories like weights, swimming, yoga or cycling. So if you’re a really keen sportsperson, you’re not going to find enough here to satisfy you. Sleep tracking is on the way, but it’s not available yet, either.

But if you want a stylish wearable that gives you the very basics, then the SuperCharger2 is a pleasant surprise.

What it lacks in specifics, it makes up for in general purpose. Never having to charge a smartwatch that looks good and gives you baseline activity tracking is going to be more than enough for most of us.

Tags: tech reviews, technology
You may also like
Celebrities News