Supplying up-to-date COVID-19 information to Australians is a daunting responsibility for any media executive. But for Mandi Wicks – who replaced retiring SBS news and current affairs director Jim Carroll in September – it was especially challenging.

"We had to provide news and information across 63 different languages," says Wicks, who previously headed SBS's audio and language division. "Within about four days in March, we set up the SBS multilingual coronavirus portal, which is essentially a one-stop shop." 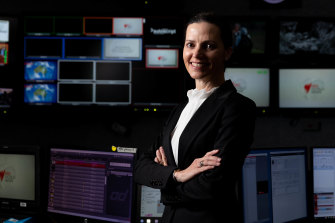 Mandi Wicks is the new director of news and current affairs at SBS.Credit:Janie Barrett

Each day, Wicks and her team updated a series of fact sheets – detailing the latest case numbers, government health alerts and changing restrictions in each state – in Cantonese, Hebrew, Rohingya and dozens of other languages.

"It’s taken a lot of focus over many months but it's a commitment we've continued," Wicks says. "As a result, we've seen more than five million unique visitors to that portal."

SBS's television network has also grown. For the first time, its suite of channels – comprising SBS's main channel plus Viceland, World Movies, Food and NITV – will finish the year with an audience share exceeding 8 per cent. Ratings for its flagship World News bulletin are up by more than 30 per cent compared to 2019 while news-satire program The Feed, which moved from Viceland to the main channel this year, has almost tripled its viewership. All up, SBS's TV broadcasts reached a record monthly average of 12 million Australians.

We have access to lived experiences and authentic voices that other outlets might not be able to reach.

But this growth was accompanied by claims from former SBS journalists alleging racist treatment and bullying at the hands of colleagues.

"We exist to contribute to our society being more inclusive so any form of racism or exclusion is totally unacceptable," Wicks says. "I've got a commitment to meet with every single person in my division; there are 160 people and I've met with about 50 so far. My job is to listen, to understand what they're loving and what they want more of, and to provide a safe place to enable them to be creative and implement their ideas."

Wicks will soon announce the new host of long-running current affairs series Insight, which has been anchored by Jennie Brockie since 2001. She will also reveal a new role for Brockie, who has won several prestigious awards including four Walkleys, an Australian Film Institute Award and a Human Rights Award.

Wicks says that Insight – which devotes an entire hour to a single topic and features participation from studio guests – will remain "a politician-free zone" in 2021.

"We did one episode about menopause through the eyes of women, which is not something most broadcasters would give an hour to. We also did one about people who had been taken hostage and one about veterinarians' high rates of suicide, which really struck a chord with the audience. Those first-person stories are really the hero of the program." 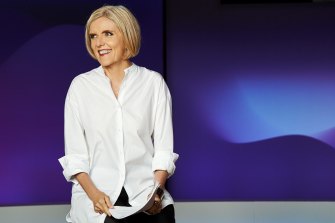 Former Insight host Jenny Brockie will take on a new role at SBS in 2021.Credit:SBS

Wicks says it's too early to discuss the new television and radio programs she intends to launch. Her immediate priority is to increase collaboration between journalists who work closely with various cultural communities.

"A good example is the recent French terrorist attacks," Wicks says. "Our SBS Arabic24 service did an interview in Arabic with the Grand Mufti of Australia; we can then translate that interview and include it in our other news services to bring that perspective to all Australians.

"We operate in almost 70 languages that represent more than 100 cultures, which means we have access to lived experiences and authentic voices that other outlets might not be able to reach. I also want to work more closely with our incredible journalists at NITV [National Indigenous Television] to amplify and promote their stories across other SBS news platforms."

After completing an arts-journalism degree in the late 1980s, Wicks worked as a reporter and newsreader at Adelaide radio station 5KA, followed by a stint at Macquarie Media. Since then, she has helmed the newsrooms at Triple M and Nova in Sydney and was promoted to run Nova and oversee the launch of sister station Vega, now called Smooth FM. In 2010, she joined SBS.

"Everything we do is in pursuit of increasing understanding between people and communities and building social cohesion," she says. "We've been storytellers for 45 years and although that hasn't changed, the world has become increasingly polarised. For us, it's really important to remain impartial and balanced while also reflecting different perspectives and voices who might not otherwise be heard."

Start the day with major stories, exclusive coverage and expert opinion from our leading business journalists delivered to your inbox. Sign up for the Herald‘s here and The Age‘s here.

Tags: as, breaks, n, ratings:, Record, SBS
You may also like
Celebrities News