You could argue the now-28-year-old conductor-in-training took the more difficult option: the art of corralling a hundred musicians into ineffable, celestial harmony. 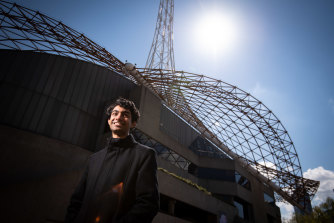 And now a prestigious fellowship with The Australian Ballet adds another hurdle: learning to conduct for dance, where the orchestra must faithfully, gracefully orbit the movement of heavenly bodies, and the conductor must bend time to cope.

“It’s definitely exhilarating,” Rodrigues says. It might look like waving your hands around, but it’s much more.

“And you’re balancing the music with the dance, the tempos of that. There’s so much to be aware of.”

Brisbane-born Rodrigues joined the Ballet in August with the Elizabeth Albert Conducting Fellowship, a program established in 2012 to train conductors in classical ballet. For 12 months he will learn to match and partner the Ballet’s dancers and discover how variations in the musicality and physique of a dancer in motion, the language and choreography of a performance, impose unique demands on musicians. 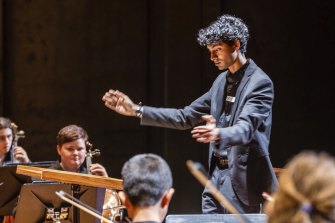 Decades ago she went to Netherlands Dance Theatre to work with world-renowned choreographer Jiri Kylian, having never conducted for dance before.

“I will never forget walking into my first rehearsal and thinking ‘I have no idea what is going on’, simultaneously with being completely inspired by what the dancers were doing, by the incredible power and capacities of the human brain and the human body in the combination of both art forms [of music and dance],” Fraillon says.

“[Kylian] knew the score inside out. I was thinking, ‘I need to understand his artform as well as he understands mine in order to do this job’.”

The job of a ballet conductor, she says, is to command and serve. You have to know what your musicians need: if a dancer or choreographer wants a piece played slowly, it can’t be made so slow that your musicians literally can’t breathe. But likewise, the orchestra must be a dance partner for the corps, not step on their feet.

“As a musician, all our training, our dialogue with one another is by music,” she says. “In ballet it’s silent. It’s how to read the bodies and anticipate what they’re going to do… getting to understand the physicality of dancers in general and then of the individuals.”

It might be as simple as adjusting a phrase of music for dancers who jump higher or lower, so each will land on the beat. Or it might be the venue: a dancer takes longer to stride from the wings to centre stage in Melbourne’s big State Theatre compared with the Sydney Opera House where “it’s a couple of hops to the other side of the stage”.

With experience, too, you anticipate the change from the rehearsal room to the theatre, when heavy costumes change the timing and rhythm of a lift or leap, where a dimly lit, atmospheric set can make dancers slower, more cautious. 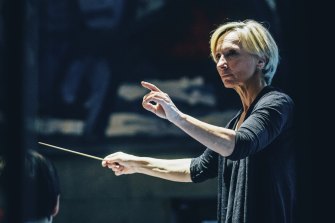 Moreover, says Fraillon, you have to “still give the audience a really convincing overall musical interpretation” of some of their favourite music.

Rodrigues is thrilled with the challenge. He’s wanted to conduct ever since, at high school, he looked at an orchestral score and it spoke to him in a language he understood.

There was the temptation of the astrophysics side of his double degree. He is inspired and moved by incredible images of the universe. But it wasn’t actually a hard choice.

“It was fascinating but it involved lots of [computer] programming, and that was going to be very tedious,” he says.

The visual splendour of dance was just as inspiring. As a conductor, you’re “usually the first person to get the music going and the last one to stop” and ballet adds to the meaning, the story and the emotion.

“The conductor is really the only link between what’s happening on stage and in the orchestra: you’re coupling that together. You have to know the music almost by heart and keep your eyes glued to the stage and be there to assist them.

“Being such a visual person myself, it’s wonderful to be able to watch… Observing the [Australian Ballet] rehearsals, it’s fascinating to see how the dancers interact with each other and with the music, and how all the elements come together.”

He hasn’t conducted a ballet yet, there’s still a lot to learn. “But for me, it’s always the music that drives me,” he says