RICHARD LITTLEJOHN: Will BoJo recapture his mojo, or has he had enough already? As he peers through the window of his self-imposed prison cell, is he thinking to himself: I’m The Prime Minister… Get Me Out Of Here!

There was something horribly familiar about the up-close-and-personal video Boris put out from Chequers on Sunday afternoon.

My first thought was that there’s a touch of the Blair Witch Project about it. The dishevelled, slightly manic, appearance. The hint of blind panic in the eyes.

Then the penny dropped. Boris’s Madman In The Attic act was an action replay of his father Stanley’s appearance in the Bush Telegraph box on I’m A Celebrity . . . Get Me Out Of Here! 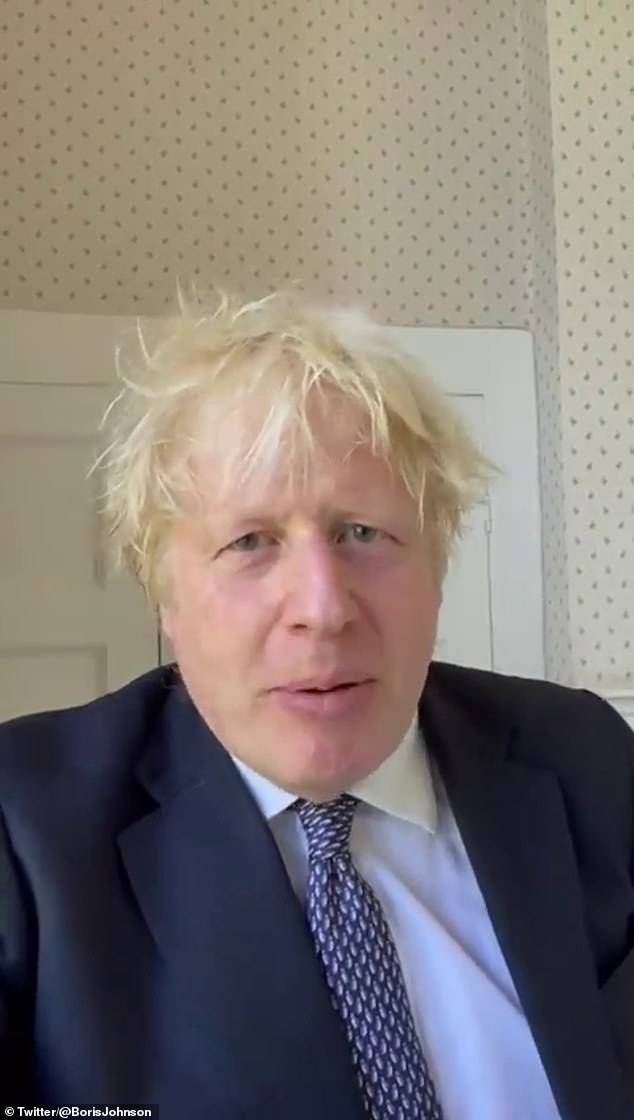 Boris initially thought he could play his joker — an exclusive pilot testing scheme which allows a select few, including those who work in Downing Street, to dodge quarantine 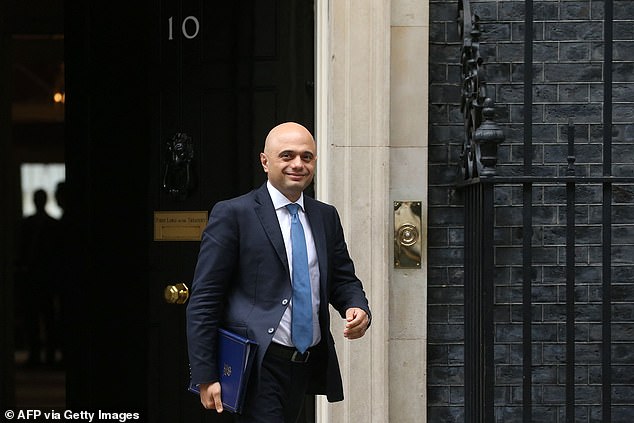 Boris has certainly been hoist with his own petard. He’s having to self-isolate because he was pinged after coming into contact with Sajid Javid, who celebrated his appointment as Health Secretary by testing positive for Covid

Back in 2017, Johnson Senior turned up on ITV’s Australian jungle reality show. For the uninitiated, the Bush Telegraph is a section of the programme in which contestants share their most intimate thoughts and fears with viewers. Stanley confessed that he was suffering from a severe case of cheese and wine withdrawal.

On Sunday, it was Boris’s turn. He was self-isolating at his country residence after being pinged by the Test and Trace app.

For some reason, he decided it would be a good idea to film a message to the nation on his mobile phone.

Perhaps he was bored. Perhaps, like his dad, he was craving a chunk of mature cheddar and a bottle of burgundy. Maybe he’s contracted ADHD (Attention Deficit Hyperactivity Disorder).

If he’s already climbing the walls of the spare bedroom at Chequers, he has no one to blame but himself.

Boris has certainly been hoist with his own petard. He’s having to self-isolate because he was pinged after coming into contact with Sajid Javid, who celebrated his appointment as Health Secretary by testing positive for Covid.

Talk about throwing yourself into a new job. Contracting the virus you’ve been hired to eradicate is dedication above and beyond the call of duty.

Boris initially thought he could play his joker — an exclusive pilot testing scheme which allows a select few, including those who work in Downing Street, to dodge quarantine.

But he thought better of it — or was persuaded otherwise — when it became glaringly obvious this would only fuel allegations that there’s one set of rules for ministers and another for all the rest of us.

So up the wooden steps to Bedfordshire trudged Boris, despite the fact that he’s not only had both jabs, he’s had Covid and is brimming with antibodies.

Of course, the sensible thing to do would be to scrap the whole Test and Trace nonsense, which is crippling the economy and causing millions of perfectly healthy people to stay away from work.

But having blown the thick end of £40 billion setting it up, they were always going to use it come hell or high water.

So we’ve ended up with the absurdity of the Prime Minister holed up in the box room at Chequers on the very day the country was supposed to regain its freedom. Rather than delivering the Churchillian speech he had planned, Boris has been reduced to communicating via Zoom and Twitter. Once again, he’s managed to snatch defeat from the jaws of victory.

The Government’s inconsistent, muddled handling of our route out of lockdown has resembled an elaborate game of snakes and ladders. Just when we think we’ve climbed out of the abyss, we start slithering backwards again. 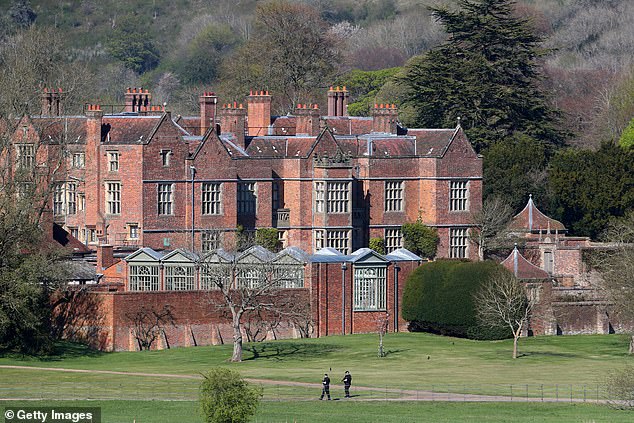 If he’s already climbing the walls of the spare bedroom at Chequers, he has no one to blame but himself

Yesterday was so-called ‘Freedom Day’. Yet because of the pingdemic, businesses all over the country were forced to close and essential services were disrupted by a desperate shortage of staff ordered to stay at home by the app.

Ministers have already dropped self-isolation rules for health and social care workers to prevent the NHS collapsing. Test and Trace has been posing a greater threat to NHS services than Covid itself.

Why not just abandon the whole, disastrous shooting match?

That, however, would require leadership. And leadership is something that is sadly lacking right now.

Boris is still being buffeted every which way by ‘the science’.

Despite his best intentions, the road to freedom remains littered with potholes and in some respects is simply lockdown by another name. As John Junor, late of this parish, used to ask: Who’s in charge of the clattering train?

While he cowers in self-isolation, it’s apparent that Boris isn’t even in control of his own immediate destiny, let alone that of the nation. He needs to get a grip.

Those of us who are eternally grateful to Boris for securing Brexit and seeing off the Corbyn menace take no pleasure in tipping a bucketload of warm ordure over him.

But our patience is wearing thin. Even his close colleagues have no idea what he’s going to do next. Imagine, for instance, being one of his hapless ministers sent out on the morning media round.

They confidently tell broadcasters one thing, only to be overruled by the Prime Minister a couple of hours later. Half the time he doesn’t even keep his official spokesman in the loop.

For now, this might seem to be a media/Westminster fixation. But as a result of the Test and Trace fiasco, it’s beginning to cut through outside the Bubble.

Boris’s USP has always been his carefully cultivated buffoonery and colourful use of language. Now, though, both are bordering on self-parody. As I wrote here recently, it’s one thing playing the fool, quite another taking us for fools.

And consider his bizarre ‘levelling up’ speech last week, when he drivelled on about ‘yeast, the magic sauce, the ketchup of catch-up’. Complete gibberish.

Boris’s former sidekick Dominic Cummings has compared him to a ‘shopping trolley smashing from one side of the aisle to another’ and says he’s not fit to be Prime Minister.

Of course, Cummings was thoroughly discredited when he broke lockdown rules and drove to Barnard Castle ‘to test his eyesight’. Even though Boris defended him at the time, the two men fell out spectacularly. So there’s an ocean of bad blood there.

But Cummings has been closer to Boris than anyone apart from Carrie. And just because it’s Cummings saying it, that doesn’t mean it isn’t true.

From the outside looking in, there’s something about Boris’s recent erratic behaviour which resembles the last days of Donald Trump, described in compelling detail in a new book by Michael Wolff.

Now he’s entered his Madman In The Attic phase, we can only wonder what lies ahead. Will BoJo recapture his mojo, or has he had enough already?

As he peers through the window of his self-imposed prison cell, is he thinking to himself: I’m The Prime Minister . . . Get Me Out Of Here!

The latest bright idea from the road pricing lobby is that vehicles should be fitted with a meter which charges motorists according to the number of times the wheels go round.

Has it occurred to them that would mean cars with bigger wheels would pay less than, say, Minis?

The cheapest mile-for-mile option would be to buy one of those giant Lamborghini tractors, like Jeremy Clarkson.

Apple has unveiled a pregnant man emoji in a nod to the trans agenda. Complete with moustache, it looks a bit like Ned Flanders, Homer’s next-door neighbour in The Simpsons.

There’s also a ‘bearded person’ option, which allows users to choose between a male or female face.

The only place you used to see a bearded woman was in a circus. But we must move with our enlightened times.

Apple has unveiled a pregnant man emoji in a nod to the trans agenda. Complete with moustache

There is, however, nothing new about the pregnant man. As long ago as 1970, Saatchi & Saatchi created a pregnant man poster for the Family Planning Association, with the slogan: ‘Would you be more careful if it was you who got pregnant?’

It caused quite a sensation at the time. Back then no one would ever have suggested that men could give birth.

Fast forward 50 years and anyone these days who suggests otherwise is likely to be cancelled on Twitter, hounded out of their job and arrested for committing a ‘hate crime’.

Bring on the bearded lady!