From the moment COVID-19 arrived on our shores, our leaders embraced military rhetoric to explain the gravity of the situation.

Framing the fight in the context of war was a useful way to enforce the discipline we all needed to flatten the curve. The science may be complex, but the messaging was clear: it was time to unite against a common enemy. 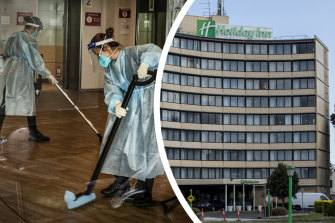 The wartime metaphors also had an added political benefit. The language allowed our leaders to dismiss tactical errors by pointing to the gravity of a global threat. The virus became a ready-made excuse for any policy mistakes. Blame COVID-19, don’t hold us to account, was the subtext.

Like many leaders, Daniel Andrews embraced this language of war to push for cohesion.

It does, of course, have a downside. Framing the pandemic as a war encourages a culture of blame, not oversight. We blame the virus for keeping us apart from our loved ones, for disrupting weddings and funerals, for closing businesses.

For so long, Daniel Andrews succeeded in framing this crisis as something that was inflicted on his government, not inflamed or aggravated by it.

Should this lockdown end on Wednesday night as planned, the strategy may continue to work.

If this latest outbreak isn’t contained, though, it becomes untenable.

Announcing the initial leaks from hotel quarantine, the Andrews government first pointed the finger at the hyper-infectious UK strain of the virus, which presented an “even greater challenge” than 2020.

Like a fresh deployment of troops with a better arsenal, we were told our common enemy had re-emerged stronger than before.

This is not a uniquely Victorian problem, of course. The UK-strain has been identified in quarantined travellers in other states and was responsible for snap lockdowns in Queensland and Western Australia.

The government hid behind the stronger strain when questioned about hotel quarantine settings. Instead, we were told Victoria’s regime was of a “higher standard” than any other state.

In true pandemic style, the government then pivoted to blame the leak on a naughty returned traveller, since hospitalised with coronavirus, who it said had failed to declare a nebuliser that may have kick-started the spread.

When that severely ill man told this newspaper staff gave him the green light to use the medical device at both the initial quarantine hotel and the medi-hotel, a new enemy had to be found.

Contact tracing was again in the spotlight after it was revealed there was a lag in contacting almost half the close contacts of potentially-infected Victorians during a crucial 24-hour window last week.

With more than 6 million Victorians locked in their homes and businesses again forced to shut, we must ask to what extent the latest breach was exacerbated by the government’s policy settings.

Ignoring the government’s potential culpability for this latest lockdown will prevent necessary changes to the COVID-19 response that are needed to keep us safe.

Tags: Andre, backfire, may, on, Rhetoric
You may also like
Celebrities News