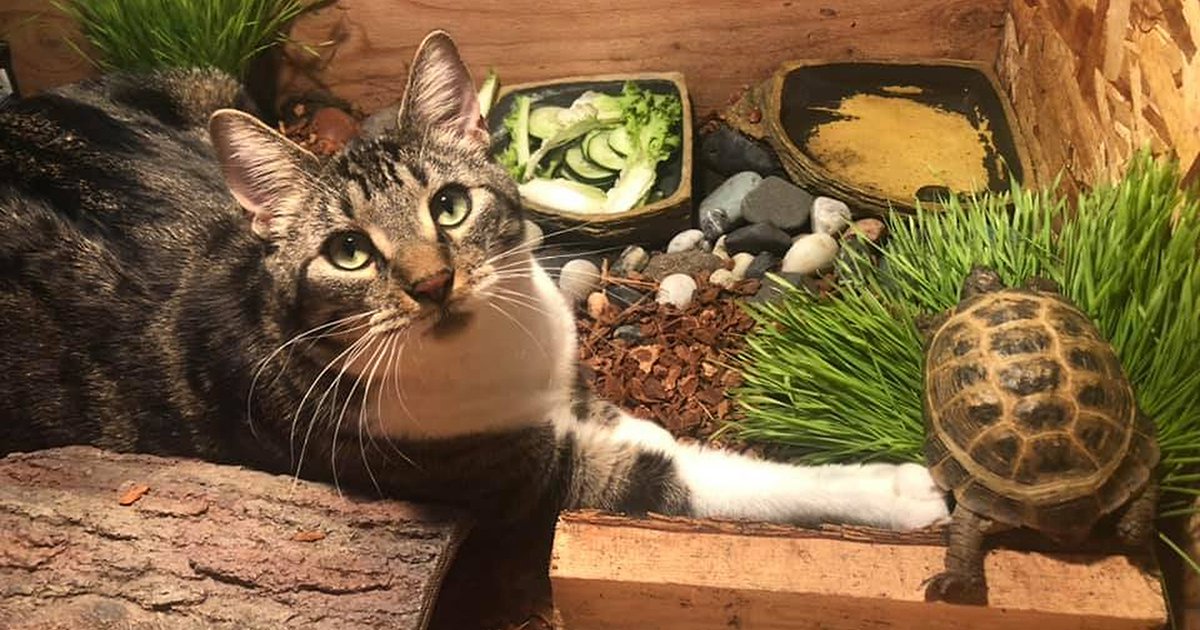 A tabby and a tortoise are now best buds after the cat broke into the reptile’s tank to catch some rays.

Angel Farr, 20, was surprised to find her newly adopted rescue cat, on-year-old Theodore, getting nice and toasty warm in the home of her housemate’s tortoise, three-year-old Aldouin, after the moggie briefly went missing in June.

Worried the cat would be scaring Aldouin, she shooed Theodore out of the enclosure.

However, the cat kept going to visit Aldouin over the following weeks.

Angel says now the pair are inseparable and can be often found hanging out with each other in the apartment she shares with Aldouin’s owner, Stephen, 20. 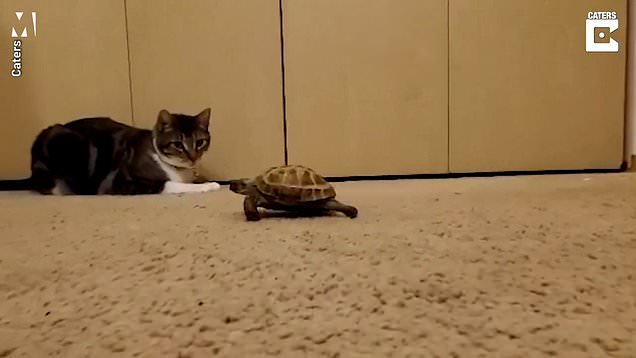 ‘I’m surprised how well they get along.

‘If Aldouin is scared he will hide in his shell or under a log, but he’s comfortable with Theodore being around.

‘Theodore is a loving and caring cat and I think he just likes lying under the head lamp in Aldouin’s box.

When the two buddies aren’t soaking up the warm lamp rays in Aldouin’s enclosure together, Theodore can be found playing chase with him and affectionately pawing at him.

Angel adopted Theodore in April and the young cat didn’t meet Aldouin for more than a month because she was worried about how he would react to a tortoise.

However, since Theodore invited himself into Aldouin’s home, Angel and Stephen are more relaxed about the pair hanging out, but always keep a watchful eye on them.

When Theodore isn’t hanging out with his little friend, Angel says he enjoys sleeping in her and her boyfriend’s bed and belly rubs.

She said: ‘It’s cute how Theodore pets Aldouin with his paw.

‘Aldouin never tries to run away. He is used to Theodore slinking around near him now.

‘I hope they’ll stay friends as Theodore grows up.’

Tags: Animals, Cats, Cute
You may also like
Celebrities News