After Carlton coach David Teague admitted he was not as honest as he should have been when last week he bristled at questions about Patrick Cripps’ injury situation, it was a hot topic on this week’s AFL Real Footy Podcast.

Teague at the weekend conceded he hadn’t dealt with the situation well when initially rejecting an Age report and said: “That was pretty average by me.” 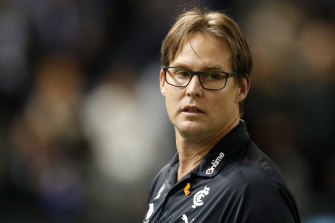 Teague explained that “there’s times you want to protect your player”.

“At the end of the day, the message I wanted to get across is he is fine now. I probably could have been clearer with the messaging around that,” Teague said.

“I thought it was one of my worst press conferences.”

“He was made to look dishonest or incompetent,” Gleeson said.

Caroline Wilson said the Carlton coach “had a shocker”.

“I felt David Teague went into this season under a lot of pressure. I think the honeymoon was well and truly over last year for a number of reasons,” Wilson said.

“Good on him for admitting he’d been an idiot and had a shocker. I don’t mind that. But when you’ve got the club briefing other people after The Age story was broken, confirming the story, the coach [looks] like a knucklehead.”

Chief football writer Jake Niall said: “You’ve got to remember in these instances that you’re talking to your supporters.

“They can see Patrick Cripps is below his best and there’s been an issue. Everyone had seen that.”

Richmond are also in the spotlight for the significance of their narrow win over Greater Western Sydney on Saturday night and for the ongoing fall-out of the nightclub incident Shai Bolton and Daniel Rioli were recently involved in.

To other big questions in footy: what does Alastair Clarkson’s coaching future look like? The team analyse Melbourne’s stunning start to the season, a 9-0 return that now probably mean theories that Clarkson would coach his former club next are knocked on the head.

Plus the intrigue around Collingwood’s board make-up, the Magpies’ “unattractive” brandof footy, and, to an unexpected question, should the Gold Coast Suns have bothered with naming a team of the decade?