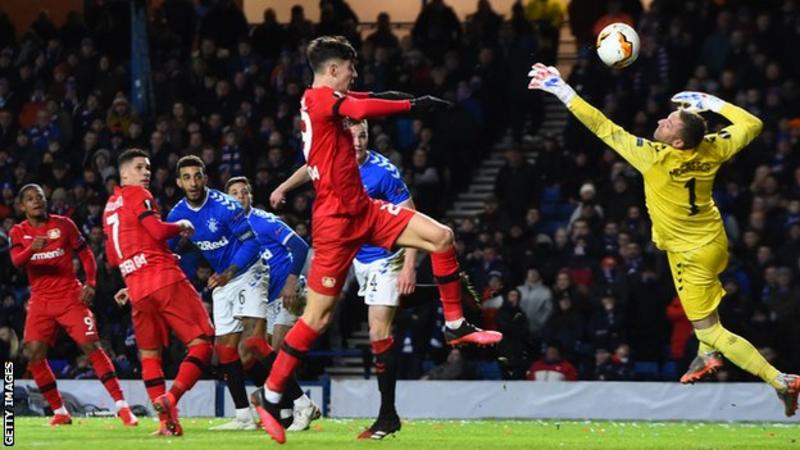 Rangers suffered a first home European defeat in 18 games as they lost to Bayer Leverkusen in the first leg of their Europa League last-16 tie.

Kai Havertz’s first-half penalty – given after a VAR check for handball against George Edmundson – put the Germans in front and Charles Aranguiz crashed in a second.

Edmundson gave Steven Gerrard’s side hope when he headed in a James Tavernier cross, but Leon Bailey lifted in a stunning third to condemn Rangers to a third defeat in four matches.

On a disappointing night for the Scottish Premiership side, a glass bottle was thrown onto the pitch from the crowd in the final few moments before being picked up by Leverkusen’s Moussa Diaby.

The second leg of the tie is scheduled to be played in an empty Bay Arena in the north-west of Germany next Thursday amid measures to slow the spread of coronavirus.

However, with leagues suspended around the continent and the first legs of two Europa League last-16 ties already postponed, it remains to be seen if that encounter will take place as planned.

Champions League drop-outs Leverkusen had overcome the likes of Bayern Munich, Borussia Dortmund and Atletico Madrid this season, so it came as little surprise that they impressed from the start.

Karim Bellarabi, Kerem Demirbay and Havertz darted and danced past their Rangers counterparts but, for the most part, their chances were limited to long shots and speculative crosses.

Rangers looked relatively comfortable, with Edmundson, Connor Goldson and Allan McGregor heading, punting and punching crosses away with ease. Then came a moment of luck for the Bundesliga side.

Chasing Aranguiz to the bye-line, Edmundson threw himself in front of the midfielder’s cross and deflected the ball away. But, just as Leverkusen were preparing for the corner, the referee pulled play back.

After consulting the VAR screen, Pawel Sokolnicki judged the ball had hit Edmundson’s hand and pointed to the spot. Havertz stepped up to calmly slot in his 10th goal of the season.

Rangers had an almost immediate shout for their own penalty when Goldson’s glancing header hit Jonathan Tah, only for replays to show the ball had hit the defender’s back.

Gerrard’s side began the second half unchanged but it took just seven minutes for Florian Kamberi to be introduced, and that put Rangers on the front foot.

The hosts lifted the tempo of their play and the noise from their fans and Leverkusen suddenly looked uncomfortable for the first time.

Tavernier darted through the middle of the pitch and found Alfredo Morelos but the Colombian, in search of his first goal since early February, saw his firm effort pushed wide.

Rangers weren’t done, though. Kamberi nicked possession deep in the Leverkusen half and drove in to the box, before squaring to Morelos, only for Tah to slide in and block.

Leverkusen were not rattled by the change in momentum and soon restored their authority. First, Aranguiz had a ferocious shot headed off the line by Steven Davis, before having better fortune a couple of minutes later when his low drive through a crowd of defenders found the net.

The Germans were comfortable, but caused themselves some alarm with a sloppy attempt to defend a Tavernier corner, Edmundson charging in unopposed to head Rangers back into it.

Memories of the comeback against Braga in the last round came to mind, a thought heightened when Borna Barisic curled a free-kick inches wide.

Aranguiz went one better by forcing McGregor to touch his effort on to the cross bar before Leverkusen added a splendid third.

Substitute Bailey picked the ball up wide in the area, shuffled away from a bewildered Matt Polster and lifted a delicate finishing up and around McGregor.

That ended any hope of a Rangers revival and ensured they would lose a European game at Ibrox for the first time since a Champions League qualification defeat against Malmo in 2011.

Attempt saved. Ianis Hagi (Rangers) left footed shot from outside the box is saved in the centre of the goal. Assisted by Alfredo Morelos.

Attempt missed. Alfredo Morelos (Rangers) header from the centre of the box is high and wide to the left. Assisted by Borna Barisic with a cross.

Moussa Diaby (Bayer 04 Leverkusen) is shown the yellow card for a bad foul.

Florian Kamberi (Rangers) wins a free kick in the defensive half.

Jonathan Tah (Bayer 04 Leverkusen) wins a free kick in the defensive half.

Attempt saved. Julian Baumgartlinger (Bayer 04 Leverkusen) header from the left side of the box is saved in the bottom left corner. Assisted by Mitchell Weiser with a cross.

Attempt missed. Ryan Kent (Rangers) left footed shot from outside the box misses to the right. Assisted by Scott Arfield.

Mitchell Weiser (Bayer 04 Leverkusen) is shown the yellow card for a bad foul.

Ianis Hagi (Rangers) wins a free kick in the defensive half.

Attempt saved. Charles Aránguiz (Bayer 04 Leverkusen) right footed shot from long range on the left is saved in the top centre of the goal.

Ryan Kent (Rangers) is shown the yellow card for a bad foul.

Leon Bailey (Bayer 04 Leverkusen) wins a free kick in the attacking half.

Attempt missed. Borna Barisic (Rangers) left footed shot from outside the box is close, but misses the top right corner from a direct free kick.

Wendell (Bayer 04 Leverkusen) is shown the yellow card for a bad foul.

Ryan Kent (Rangers) wins a free kick in the attacking half.

Attempt saved. Kerem Demirbay (Bayer 04 Leverkusen) left footed shot from outside the box is saved in the bottom right corner.

Scott Arfield (Rangers) is shown the yellow card for a bad foul.

Kai Havertz (Bayer 04 Leverkusen) wins a free kick in the attacking half.

Mitchell Weiser (Bayer 04 Leverkusen) wins a free kick in the defensive half.

Aleksandar Dragovic (Bayer 04 Leverkusen) wins a free kick in the defensive half.

Tags: 1-3, Bayer, Leverkusen:, Rangers
You may also like
Celebrities News