Warning to Aboriginal and Torres Strait Islander readers: This story contains references to a deceased person.

ABC presenter Tony Armstrong is adamant that it’s his responsibility to “step up” and use his platform to highlight issues facing Indigenous Australians after a racist email he received was referred to police.

The email sent to his ABC work account made direct reference to his appearance on channel 10 show The Project where Armstrong condemned media coverage of the Netball Australia sponsorship saga and the death of an Indigenous teen in Western Australia.

Armstrong, who is a proud Gamilaroi man, tweeted a screenshot of the email early Tuesday evening, which used racial slurs and described Armstrong as “scum” and “uneducated”.

On Wednesday, he elaborated on his motivation to speak out.

“It feels like it’s been a really tough time recently and the weight of being asked to step up and do what’s right is heavy. But it’s a call that we’re all ready to answer. I’ve got a platform so it’s my responsibility to use it as best I can, as tiring as that can be at times,” Armstrong said. 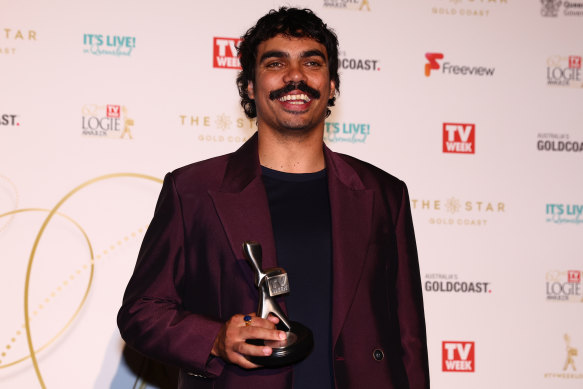 The ABC has thrown its support behind Armstrong with director of news Justin Stevens saying “racist harassment is sickening”.

Armstrong tweeted on Tuesday: “This shit has gotta stop.

“One thing is for certain though, this isn’t guna [sic] stop us speaking up or stepping up.”

Stevens confirmed the ABC has referred the matter to police.

“Our journalists should not be attacked or subjected to abuse for doing their jobs,” he said.

“The ABC is taking a range of actions to support Tony Armstrong, including referring the matter to police.”

The national broadcaster is in the process of conducting a “bigger” project to address the issue, Stevens said, which will look into the abuse and harassment its employees face, including on social media.

The email made reference to his appearance on The Project, where the 33-year-old described recent media coverage following Hancock Prospecting’s withdrawal of its $15 million sponsorship with Netball Australia as “the pro-Gina PR push”.

The withdrawal came after Diamonds players initially refused to wear the company’s logo, out of solidarity for their teammate and proud Noongar woman Donnell Wallam, who expressed concern over wearing the logo because of racist views expressed by the company’s late founder Lang Hancock.

His daughter Rinehart, who now runs the company, has not condemned the racist comments Hancock made in the 1980s. In the 1984 Couldn’t Be Fairer documentary, footage of an interview was included where Hancock proposed that some Indigenous people be sterilised to “breed themselves out”.

“Let’s be clear, [Lang] was not a senile blow-in who got drunk and shot his mouth off,” Armstrong said. “He was the mining pioneer who started the company. He was the one who handed the reins to Gina. He believed every one of those words.”

Earlier in the show, Armstrong expressed his outrage over the initial lack of media attention over the death of 15-year-old Cassius Turkey, the Noongar boy who died after allegedly being chased and bashed with a metal pole in Perth’s north-east last week.

“It’s not Hollywood enough for Australian public and Australian media to care,” he said.

“Deaths in custody have gone up since Black Lives Matter happened,” Armstrong said, referring to the protests which took place across the country in 2020, renewing Australia’s attention on incarceration rates.