In a speech at the G20 finance ministers and central bank governors meeting in Bali on Friday, Chalmers said Australia condemned Russia’s attack on the people of Ukraine. 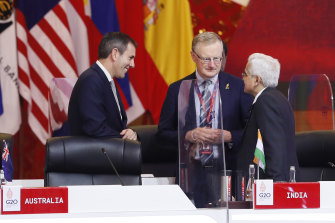 “Russia’s ongoing invasion of Ukraine is a major obstacle to our goals,” Chalmers said.

“Russia’s unjust actions have had a terrible human cost but they’ve also increased global uncertainty – prolonging and exacerbating the economic disruptions brought about by the COVID-19 pandemic.”

Since the start of the conflict earlier this year countries including the US, UK, Australia and European Union nations have placed sanctions on Russia, including blocking access to Russia’s foreign cash reserves and targeting its oil and gas exports.

The war has also choked supplies of essentials including wheat and food oils, of which Russia and Ukraine are some of the world’s largest exporters.

“It is Russia’s invasion that has undermined energy and food security and not the sanctions and so Russia must take full responsibility for this,” Chalmers said. The Treasurer added the war has also reinforced the need to secure, cleaner and more reliable energy.

The Russian invasion of Ukraine more than 20 weeks ago has exacerbated economic pressures around the world, as most industrialised countries battle high inflation, Chalmers said.

“The global economic situation has deteriorated and we are entering a difficult, if not dangerous phase with costs and consequences for all of us. This is the sobering reality that we confront,” Chalmers said.

Inflation is over 9 per cent in both the UK and the US. In Germany inflation dipped slightly to 7.6 per cent in June, and in France inflation is nearing 6 per cent. The Australian Bureau of Statistics will publish updated inflation data next week and the Reserve Bank expects it to reach 7 per cent by year’s end.

The high rates of inflation are forcing central banks to move hard on interest rates – with the central banks of Canada and South Korea both lifting rates by a whole percentage point this week.

The Reserve Bank is expected to lift Australia’s cash rate by at least half a percentage point at its next meeting in August, but some economists believe the board could hike rates by 0.75 percentage points off the back of next week’s inflation data and the strong jobs figures published on Thursday.

When the Reserve Bank lifted the official cash rate to 1.35 per cent in July, governor Philip Lowe note the global factors that were contributing to inflation pressures, which included the war in Ukraine.

Chalmers said there were a host of pressures countries were trying to cope with, including food and energy insecurity, lower economic growth and tough financial conditions.

“These developments are especially concerning in an environment of rising debt levels and limited fiscal space,” he said.

“The collective response will need to be carefully calibrated to ensure that growth is sustainable, balanced and inclusive, so that all of our economies and all of our societies can be stronger after COVID than they were before.”