A flower for her big brother: Sweet moment Princess Charlotte presented Prince George with a purple bloom during their royal visit to Cardiff

Princess Charlotte was snapped offering her brother Prince George a flower in a sweet moment captured during their first royal engagement today, in Wales.

The children were accompanied by their parents the Duke, 39, and Duchess of Cambridge , 40, as they met performers and crew involved in a special Platinum Jubilee Celebration Concert taking place within the grounds of the castle.

Princess Charlotte has become a favourite of royal fans thanks to her sassy personality. She has been snapped pulling funny faces, waving to photographers – and even sticking her tongue out on a family outing.

However today, bystanders also saw a more affectionate side to the seven-year-old, as she took a small purple flower, and offered it to her eight-year-old brother. 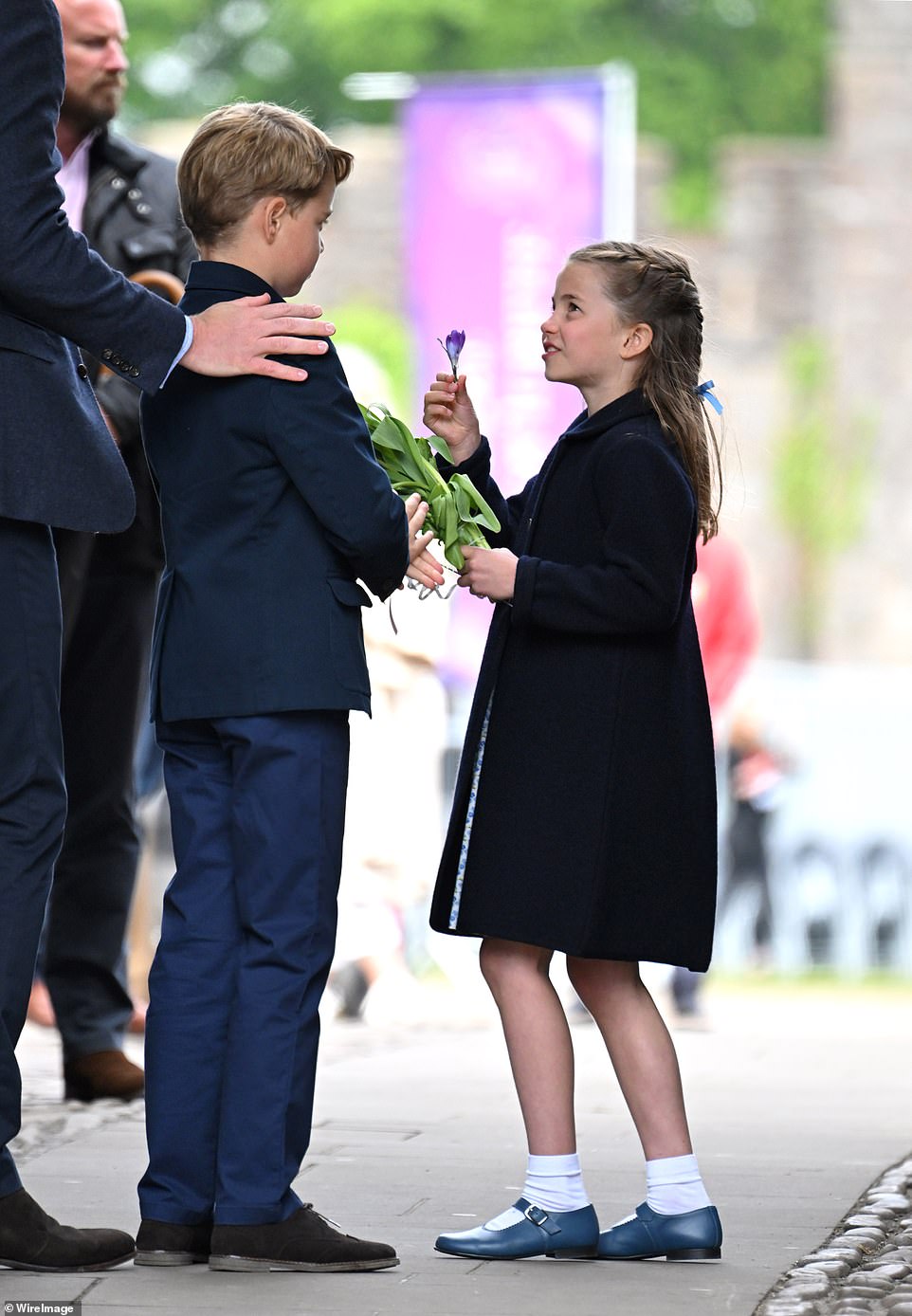 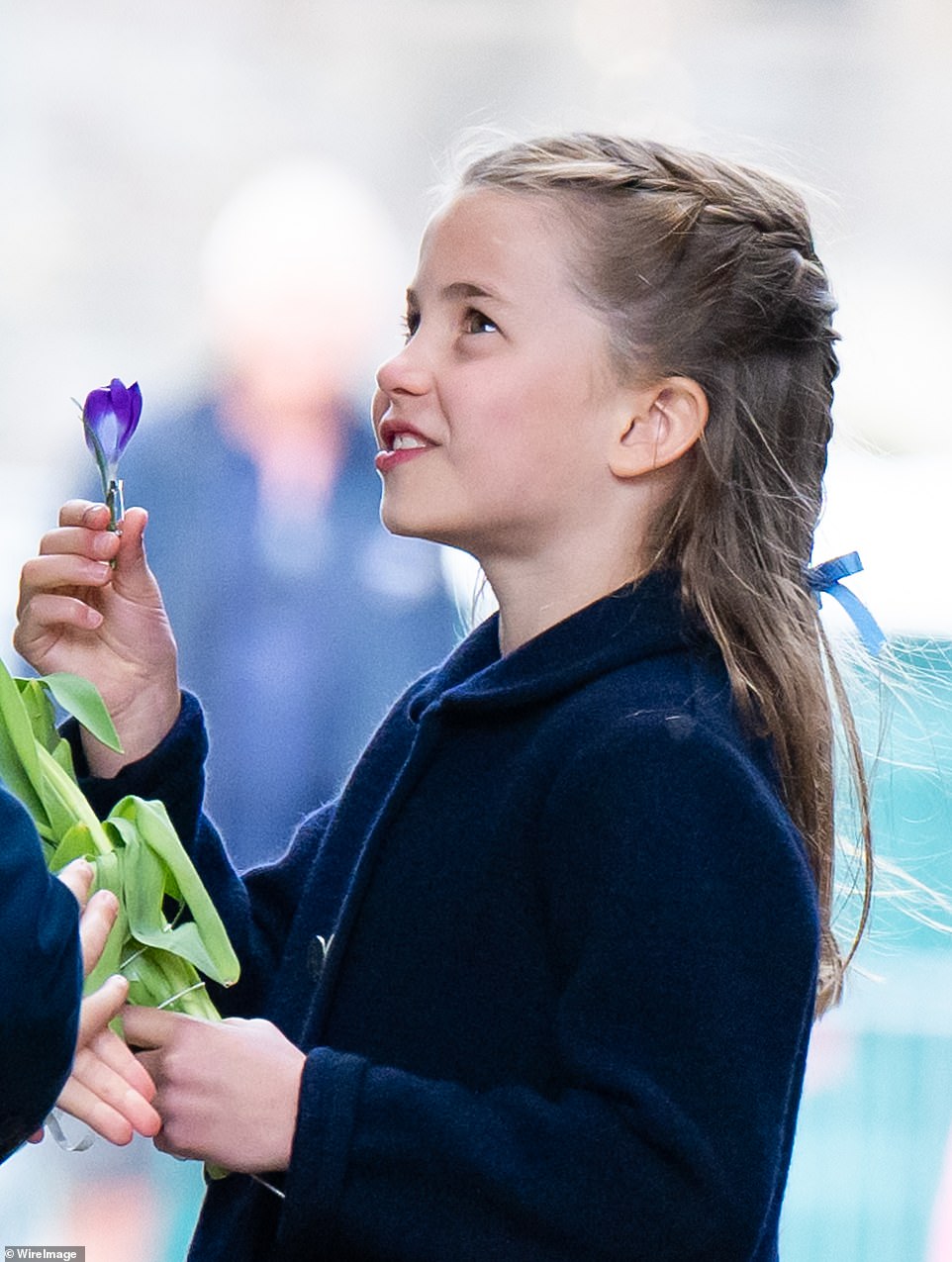 The seven-year-old princess has become a firm favourite with royal fans, thanks to her confident and bubbly personality. However, today she showed a more affectionate side with the sweet gesture

They also saw the young royal appear significantly more shy than she has during other public events, as she was  perhaps taking in the gravity of the occasion, and only reaching out to shake hands after some encouragement from her  mother Kate.

Charlotte walked hand-in-hand with the Duchess throughout the castle, who appeared to be helping her daughter adjust to her first public engagement.

Meanwhile Prince George also appeared a little timid today, ducking behind his father as he posed for a photo and holding onto Prince William’s hand.

Speaking to FEMAIL, body language expert Judi James revealed: ‘Both Charlotte and George also appear to have had training in the art of the royal smile.

‘This is clearly a skill Kate excels in, but for small children the knack of faking facial expressions to be polite can be tricky, especially when they are in public and in front of the cameras. Both children seem to be trying their best though, even if their expressions do suggest some shyness behind the fledgling smiles.’ 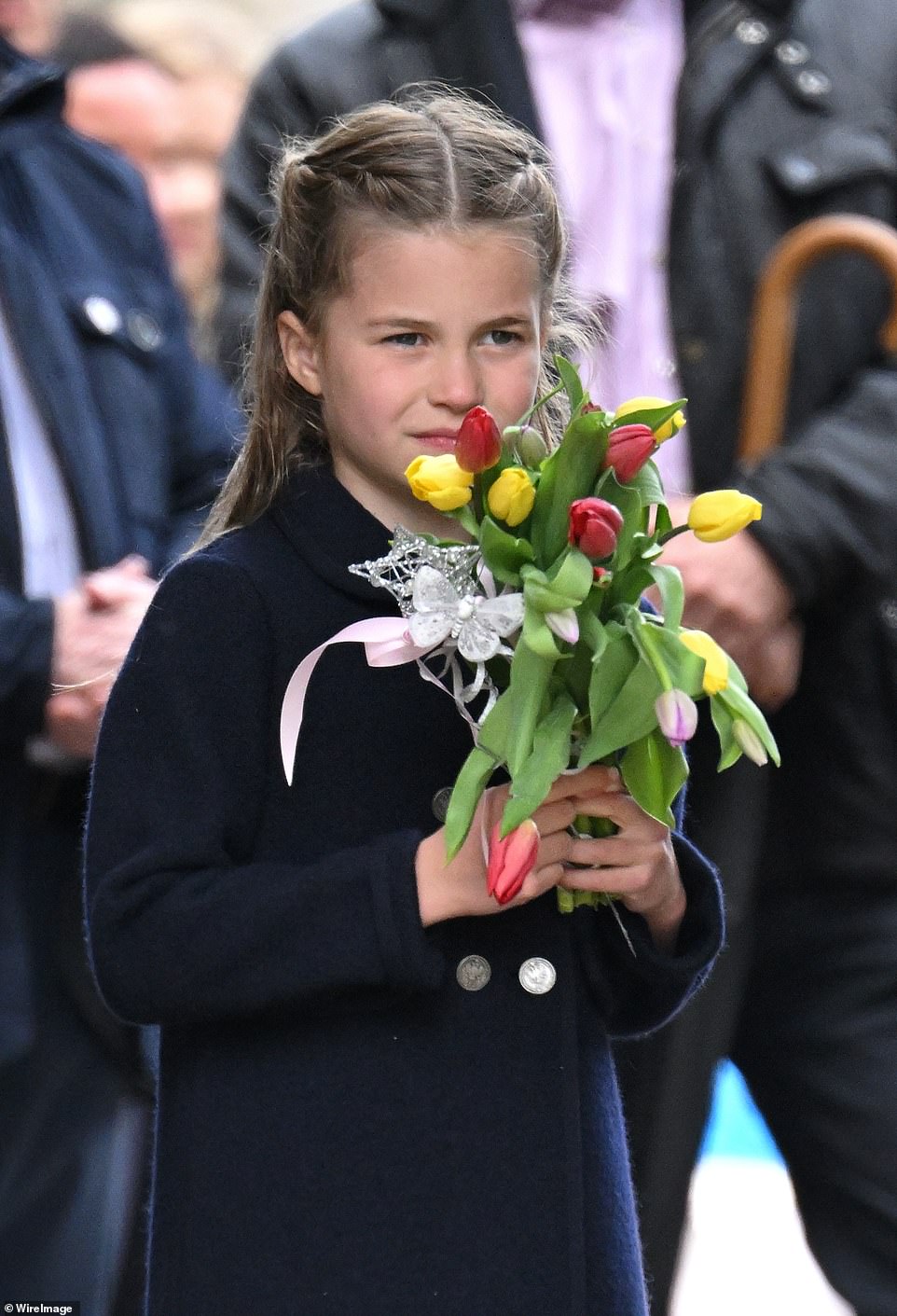 During the engagement, the young royal was presented with bouquets of flowers from the gathered crowds, who she was encouraged to engage with by her parents 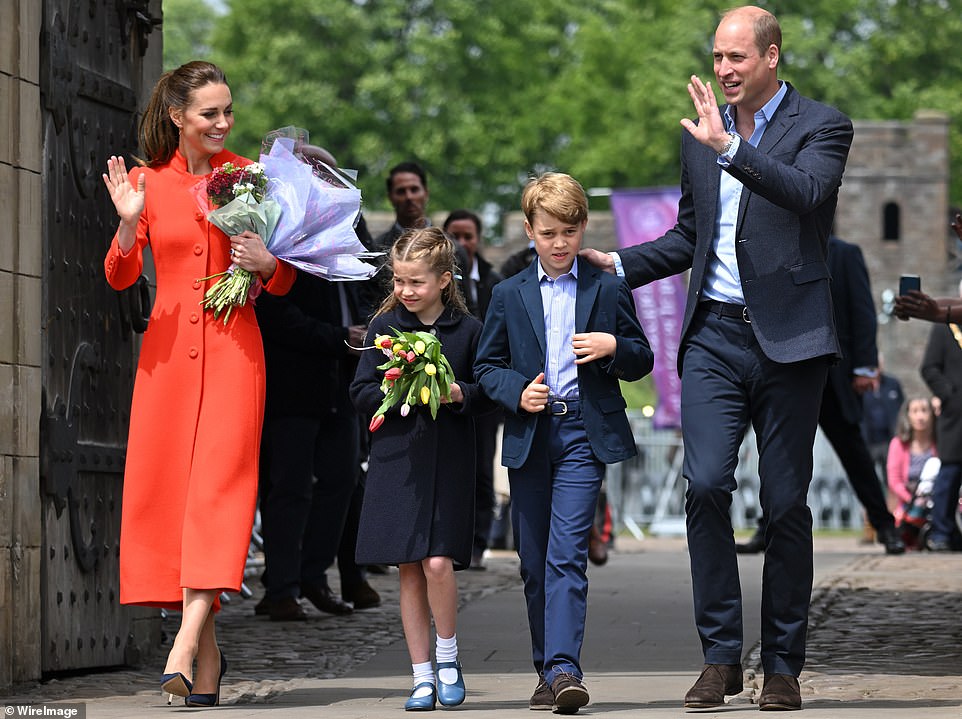 The children appeared to be somewhat shy, perhaps unsurprisingly, given the magnitude of the situation, and the number of people who’d come out to see them 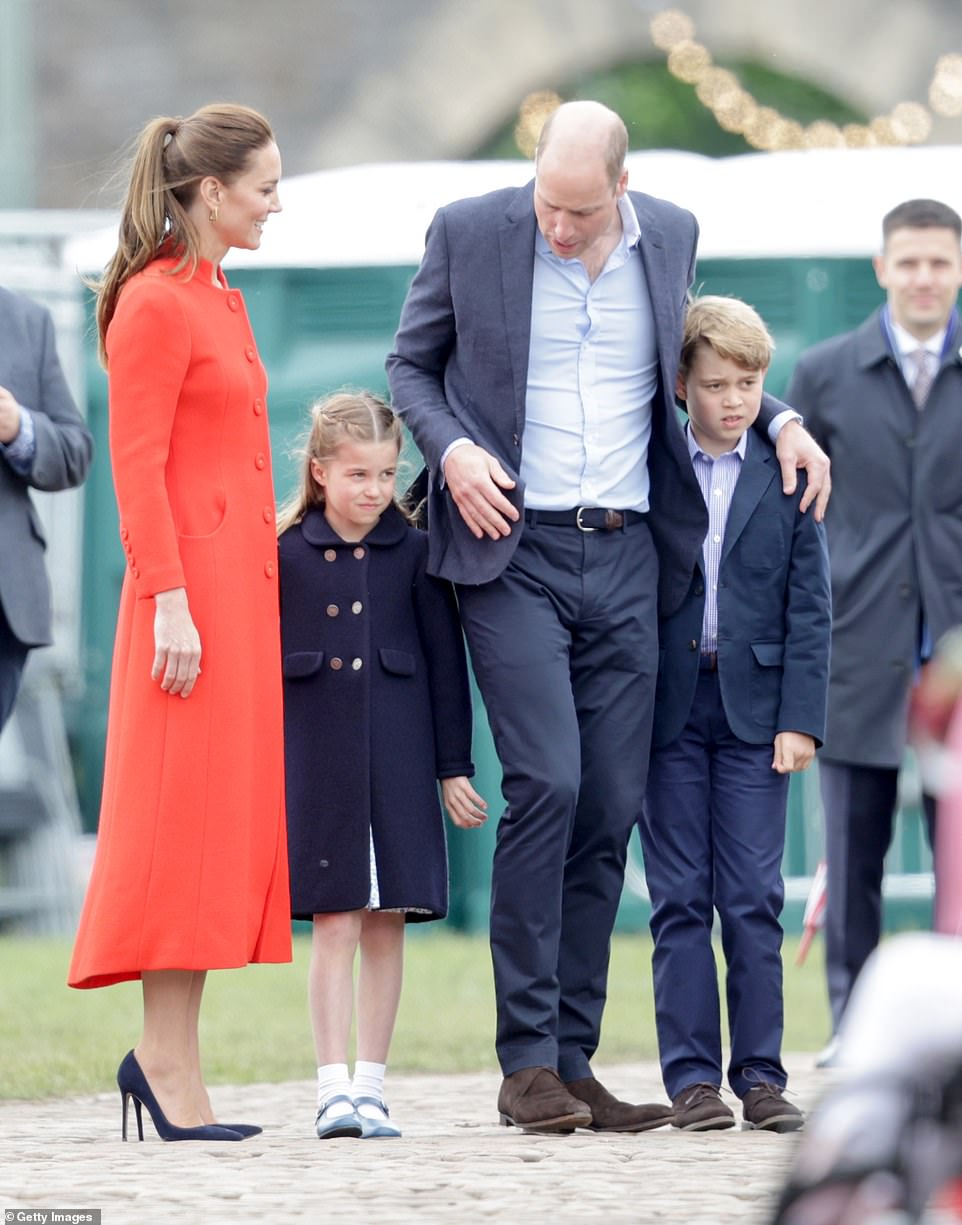 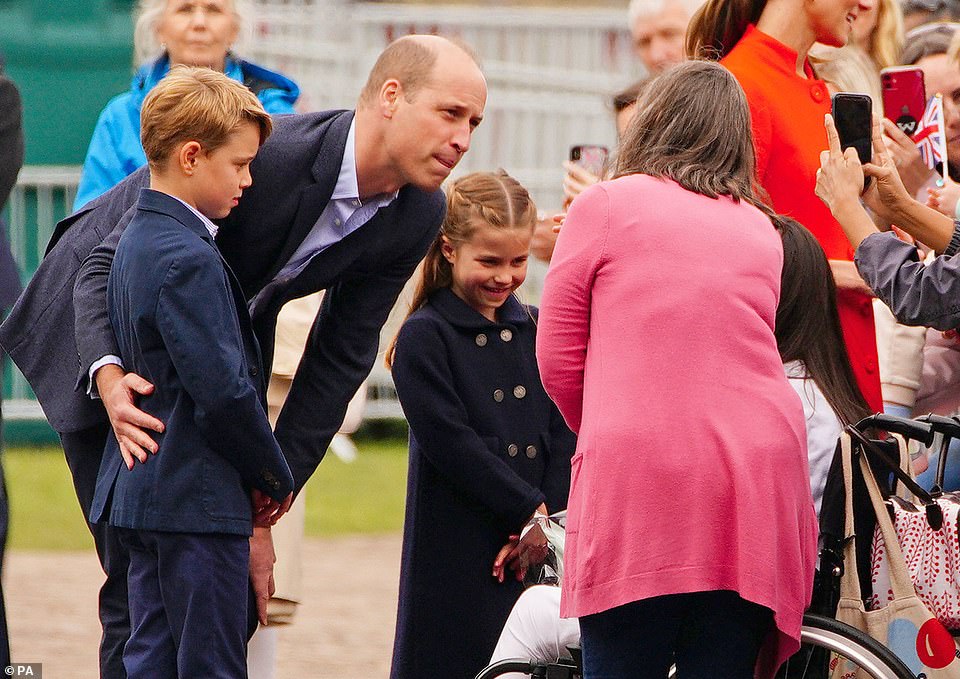 The Duke, 39, and Duchess of Cambridge , 40, along with George, eight, and Charlotte, seven, met performers and crew involved in a special Platinum Jubilee Celebration Concert taking place within the grounds of the castle 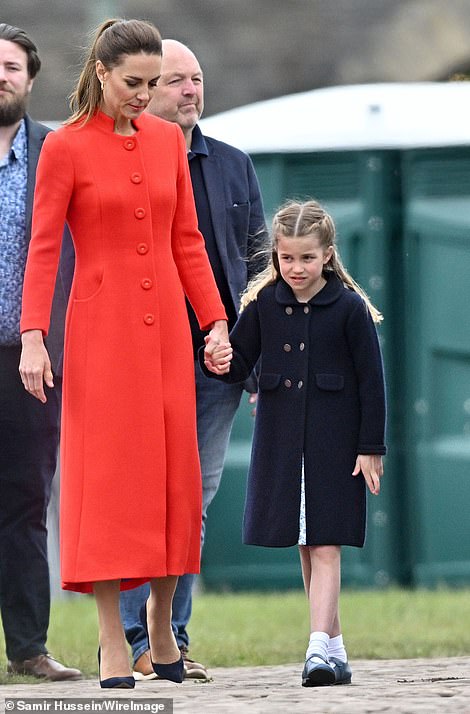 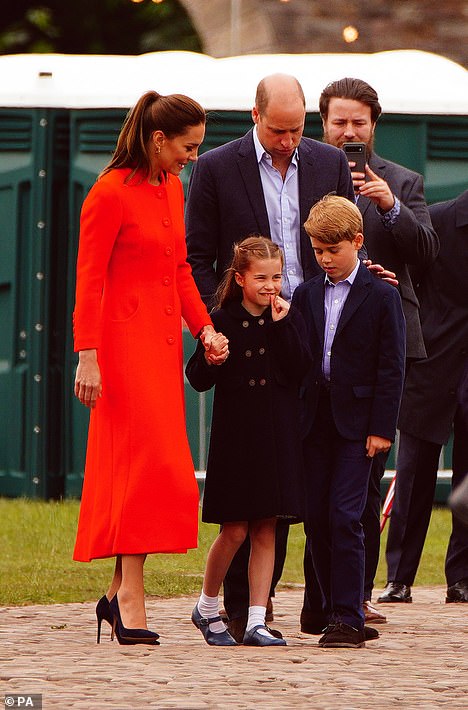 Meanwhile she revealed: ‘After their often tense-looking appearances so far during the Jubilee it was a rather more relaxed and synchronized-looking William and Kate that arrived in Wales today with their two eldest children.

‘With the tension of a rather boisterous balcony performance from Louis followed by an attempt to quash any signs of drama at St Paul’s, caused by the presence of Harry and Meghan, Kate and William were able to go into more of a parenting double-act here to show some of the non-verbal techniques they’re using to induct George and Charlotte into the formalities of royal visits.

‘Their prime gesture seems to be to ‘anchor’ both children when they are on the move by holding onto their hands and even swapping the hand-holding now so that it’s not always George who gets to be next to his father.

‘Charlotte often refuses the offer of a hand clasp, showing a sense of confidence and independence, but she looked happy to comply here. When they meet and greet with the public though the hands are dropped and both William and Kate use small touches and tie-signs on their children to signal cues and timings. 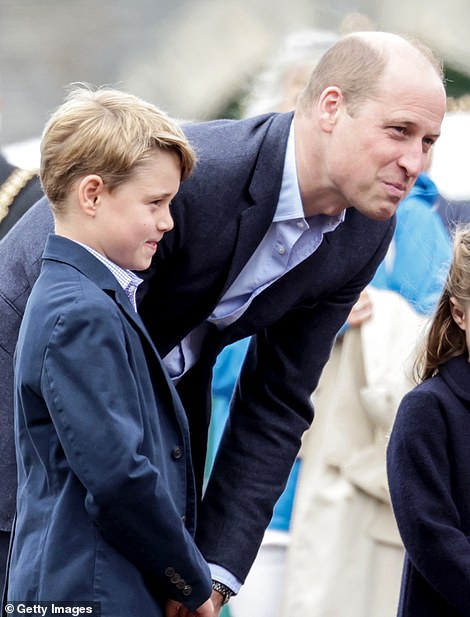 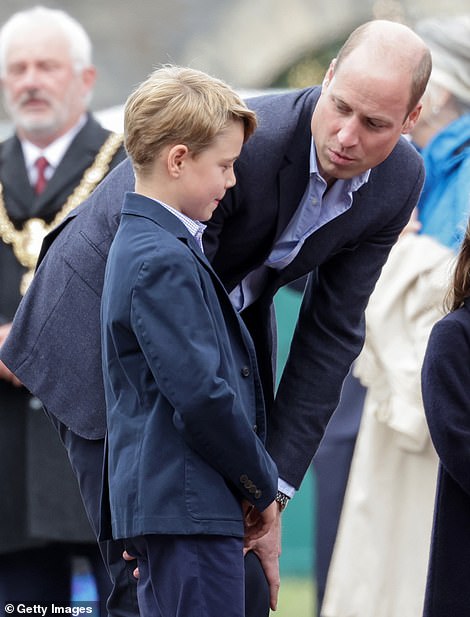 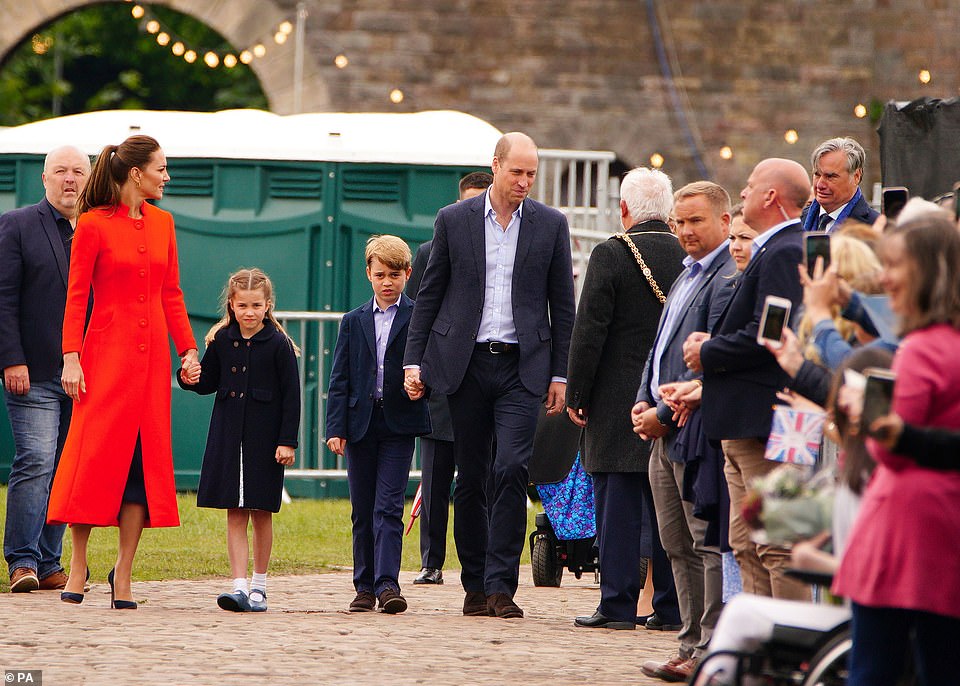 The Duke and Duchess of Cambridge, Prince George and Princess Charlotte during their visit to Cardiff Castle to meet performers and crew involved in the special Platinum Jubilee Celebration Concert 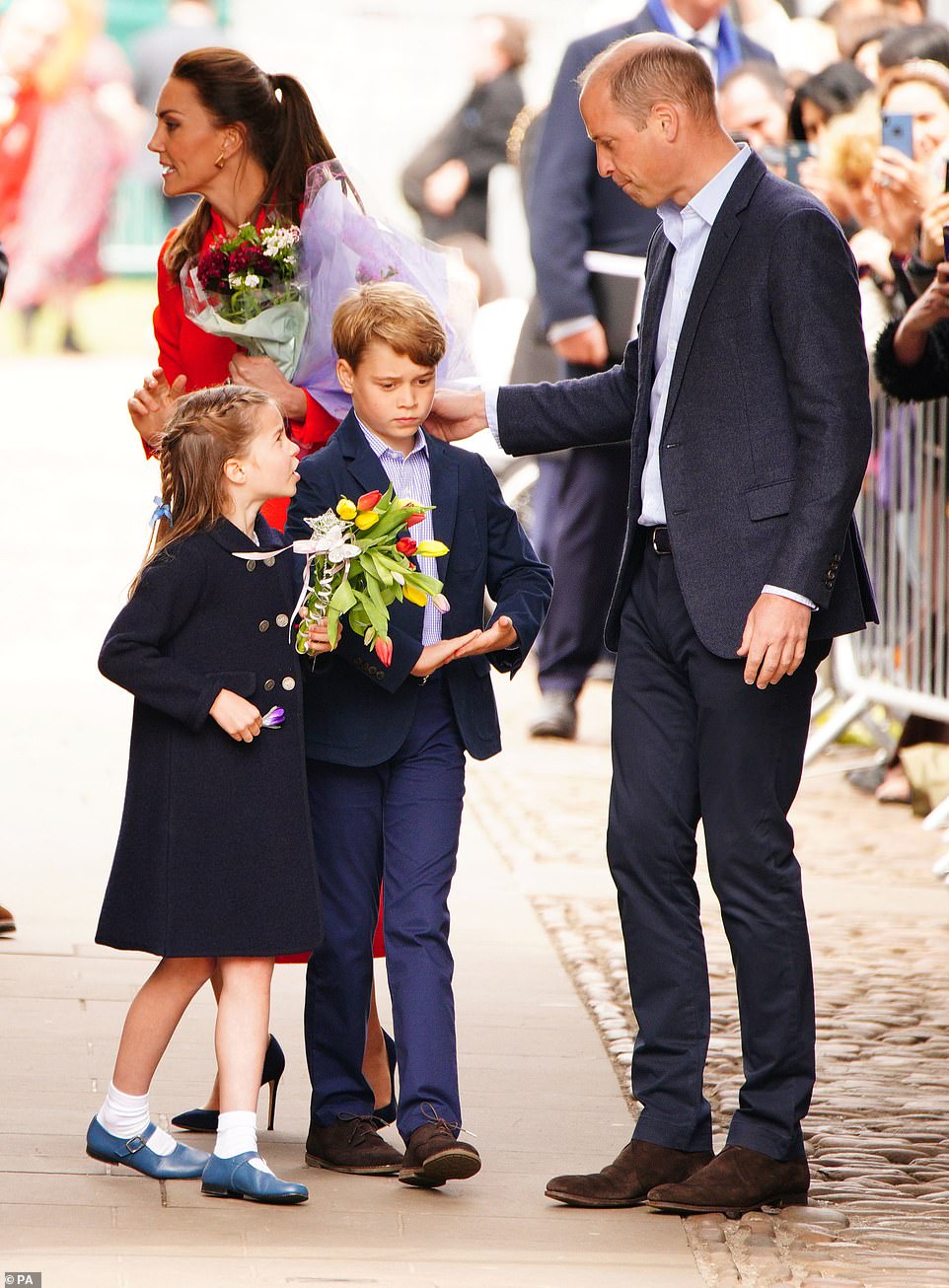 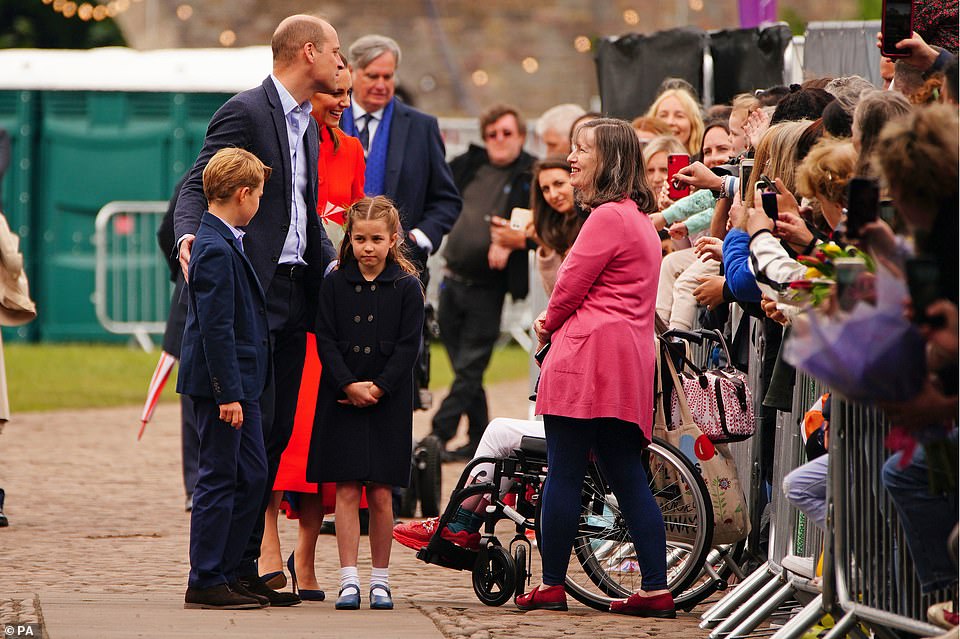 ‘Kate was seen to nudge Charlotte to step forward to shake hands after she jumped in too quickly at first, moving up before her brother and father had done their greetings.

‘William placed both hands on George’s shoulders after he’d done his greeting to let him know he was still there behind him for steering and support. Kate tends to use hair-stroking comfort gestures to help the children feel confident and praised by her, making this as comfortable an experience for them as possible’.

Missing was Prince Louis who stole the show when he appeared on Buckingham Palace’s balcony with his family and the Queen after the Trooping the Colour ceremony on Thursday.

The couple and their children are due to watch rehearsals and meet some of the acts taking part in the celebrations including Welsh singer Bonnie Tyler. Bonnie was last week made an MBE in the Queen’s Birthday Honours for her services to music.

The visit is one of a number members of the royal household are carrying out across the UK to mark the Jubilee. While the Cambridges visited Cardiff, Prince Edward and Sophie Wessex arrived in Northern Ireland. 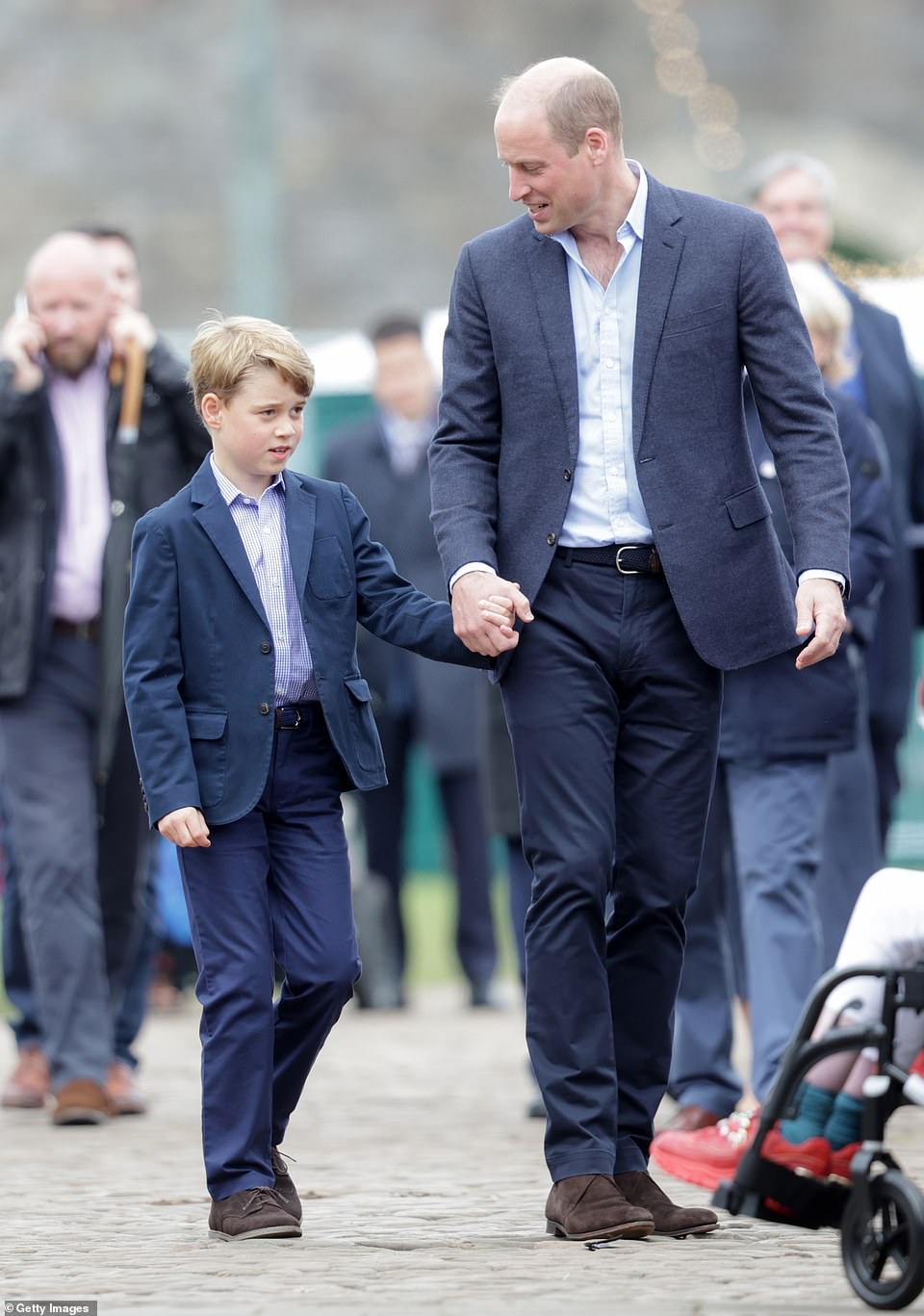 Harry and Meghan, on the other hand, are expected to be absent from Jubilee celebrations today, as they celebrate daughter Lilibet’s first birthday at Windsor and continue to keep a low-profile.

According to Omid Scobie, they will mark the birthday ‘together privately as a family’. The Queen, Prince Charles and Camilla and the Cambridges all wished Lilibet a happy birthday through their social media accounts.

Later, William and his father Prince Charles will take centre stage in front of a crowd of 22,000 to pay tribute to the Queen during a star-studded Jubilee concert outside Buckingham Palace.

The father and son – both future kings – will speak separately in honour of the monarch towards the end of the BBC’s open-air Party at the Palace show, on the third evening of the four-day Jubilee festivities.

Despite the event not starting until 8pm, royal fans began arriving at The Mall from 8am to get the best spot.

It is thought unlikely the Queen will attend the concert but confirmation of any movements will be released later today. She will also not attend today’s Epsom Derby Day, but is expected to be glued to the TV, watching the developments from Windsor.

Earlier this week, Charlotte was typically  cheeky form at Trooping the Colour, and an adorable clip showed the seven-year-old telling Prince Louis to ‘stop waving!’ as they made their journey through the crowds.

Charlotte was later spotted play-fighting with her cousin Mia Tindall, 8, in the window of the Major General’s Office overlooking the Whitehall parade ground.

Kate did not look impressed and had to step in to separate them.

Prince William and Kate Middleton’s oldest child Prince George, eight, who was dressed in a sharp navy suit, with matching blue tie, looked on as the minor squabble broke out in the royal carriage.

Little Prince Louis, stealing the fashion show in a pristine white sailor suit and bearing a striking resemblance to his father at the same age, who wore a similar outfit at the 1985 Trooping the Colour event, looked unperturbed by his sister’s chastisement and continued to wave anyway.

Nudged up between his siblings, the young Prince appeared comfortable in the public eye as he looked at the thousands of crowds gathered for the historic spectacle.

Clearly enjoying the day too, the Duchess of Cambridge was thought to have told her children ‘Look at these colours and all the flags!’ as they bypassed thousands of well-wishers on the Mall. Kate is thought to have added: ‘This is wonderful! look at all these people!’

According to a lipreader, the carriage’s young royals were clearly amazed by just how many people had turned out to mark the Platinum Jubilee at Buckingham Palace.

The most au fait with royal occasions, Prince George appeared to turn to the crowd and say ‘wow’, as he noted the thousands of people at all the people.

A giggling Princess Charlotte also remarked ‘wow’, while Prince George was seen saying: ‘This is great’.

Showing respect for their great grandmother, the Cambridge children dutifully bowed their heads when the national anthem was played on their arrival into Horse Guards Parade.

They arrived at Horse Guards Parade alongside their mother and grandmother in a carriage. The Duchess of Cambridge was wearing a white coat dress by Alexander McQueen and a hat by Philip Treacy.

Riding horses were the Prince of Wales on George, the Duke of Cambridge on Derby and the Princess Royal on Sir John.

Yesterday, the Duke and Duchess attended the service at St Paul’s without their children.