What a cancer battle looks like: Teacher, 31, shares a heartbreaking selfie of herself with one breast as she battles the disease while 33 weeks pregnant with her unborn son

A pregnant teacher has shared a confronting image of herself with one breast and a burgeoning belly as she battles cancer, explaining that she feels ‘guilty’ about having chemotherapy and putting her unborn baby at risk.

Jennifer Bibard, 31, first noticed a lump in her breast in November last year but doctors assured the Perth-based mother it was just a blocked milk duct from feeding her two-year-old son Luca.

‘When I first felt the lump, I was driving and randomly thought to check my breasts. I instantly knew in my heart there was something wrong,’ she said. 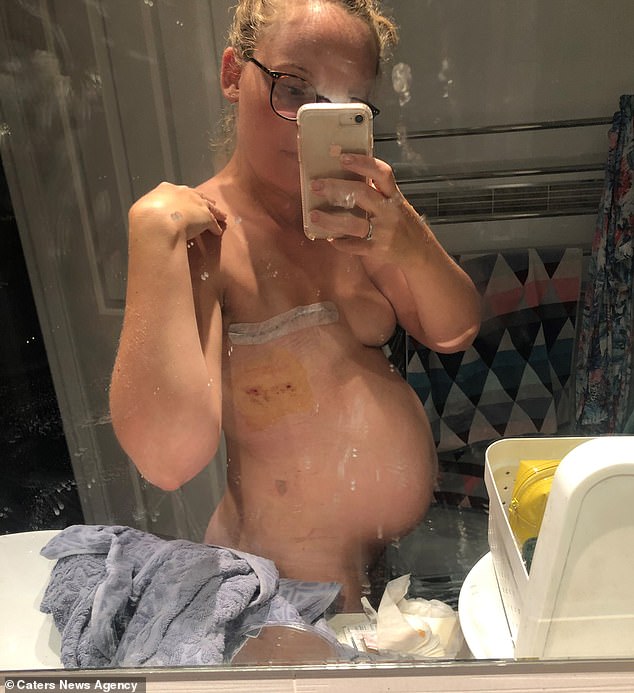 What are the symptoms of breast cancer?

The symptoms of breast cancer depend on where the tumour is in the breast, the size of the tumour and how quickly it is growing.

Breast changes that may indicate breast cancer include:

* a new lump or lumpiness, especially if it’s only in one breast

* a change in the size or shape of the breast

* a change to the nipple, such as crusting, ulcer, redness or inversion

* a nipple discharge that occurs without squeezing

* an unusual pain that doesn’t go away.

‘My GP said it is likely to be a blocked milk duct but I knew it wasn’t and refused to leave until he booked me in for a biopsy.

‘I had the biopsy on Christmas Eve and got the results on New Years Eve which made it even more devastating.’

Jennifer had an emergency mastectomy at 23 weeks to remove her left breast after the biopsy showed the tumour inside had grown from 2cm to 7cm within a month.

They also took out 22 infected lymph nodes during the surgery, which was on January 23, 2020.

If a woman is pregnant when she is diagnosed with breast cancer:

* radiotherapy is not recommended because it may harm the unborn baby; radiotherapy can be given after the baby is born

* chemotherapy is not recommended during the first trimester because it may harm the unborn baby;

* chemotherapy is often given during the second and third trimesters, when the risk of harm is lower

She has had four rounds of chemotherapy and will continue with radiation therapy after her second child is born.

‘It is really weird having cancer whilst pregnant as I consider myself to be more of a cancer patient rather than a mum-to-be,’ she said.

‘I struggled with the idea of losing my hair and breast but then I reminded myself that the kids need me more than I need my hair and boob.’

Jennifer believes her pregnancy might be shielding some the side effects of the cancer treatment because she hasn’t had any.

‘I am so glad I noticed the lump as I have given my unborn baby the best chance of having a mum,’ she said, now 33 weeks along. 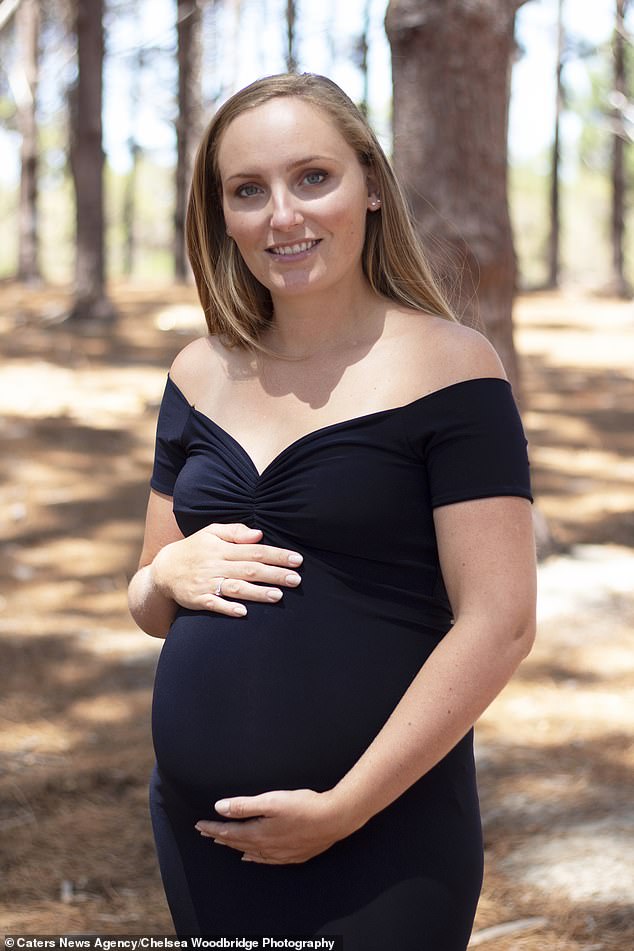 ‘I am so glad I noticed the lump as I have given my unborn baby the best chance of having a mum,’ she said, now 33 weeks along 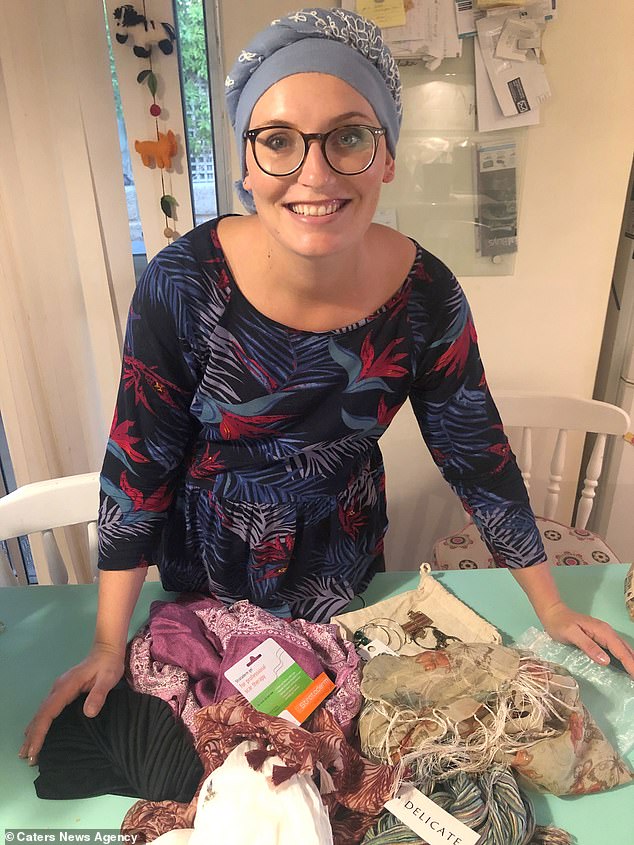 Jennifer admits it is ‘hard’ to feel excited about the pregnancy as she is worried and feels ‘guilty’ about the ‘super stressed’ environment her baby is growing in.

‘I have a scan every two weeks and it is always a relief to see my baby is still healthy and unaffected,’ she said.

‘I try and remind myself that the world is still spinning and there is more to life than cancer.’

Her son Luca is a constant reminder to keep going, as is the new little boy she and husband Samuel, 33, are about to meet. 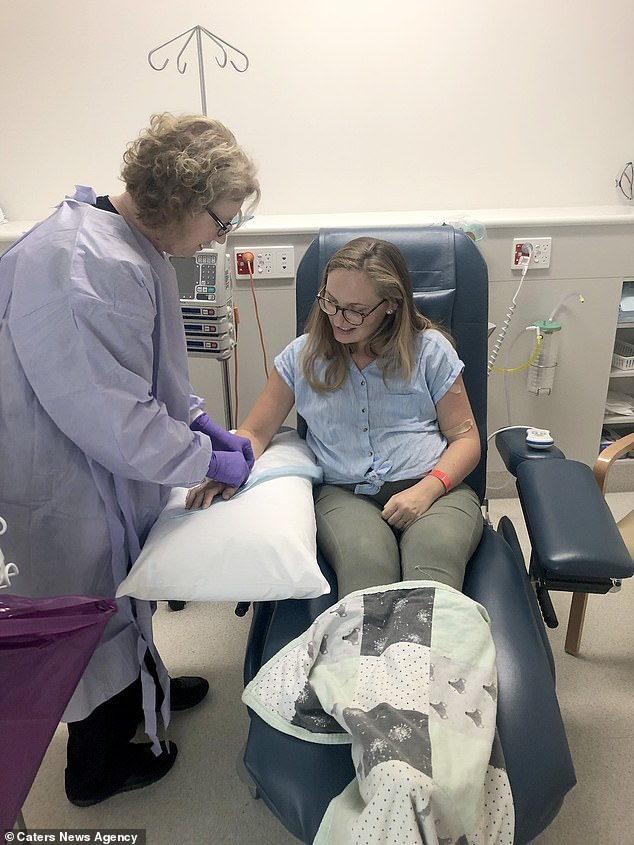 Her son Luca is a constant reminder to keep going, as is the new little boy she and husband Samuel, 33, are about to meet

Jennifer praised her community for coming together and helping her family during their greatest time of need.

Generous strangers have raised money for the family along with cooking them almost daily meals.

She adds: ‘The support I have received from strangers has been phenomenal.

‘Every day lovely strangers take it in turns to cook us a meal so we can spend as much time as possible together after work.’

Tags: A, conf, pregnant, shares, teacher
You may also like
Celebrities News