Police are conducting random spot-checks on the homes of Victorians who have been told to self isolate amid concerns from doctors that people are flouting quarantine orders and putting the community at risk.

Victoria Police confirmed to The Age that officers acting under the state of emergency declared by the Andrews government had been knocking on doors and checking on residents. 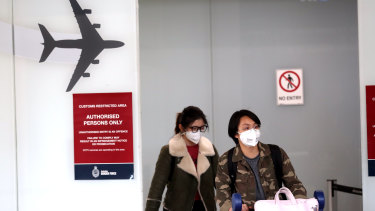 Anyone who fails to follow a public health order will face a $20,000 fine, though no one has yet been charged as a result of quarantine inspections.

Police declined to say how many home visits officers had conducted in response to information provided by the Department of Health and Human Services and other authorised bodies.

Travellers returning from any overseas country are now required to self-isolate for 14 days under strict quarantine measures announced by the federal government to slow the spread of coronavirus.

"This issue of quarantining when you come home is serious," Chief Medical Officer Brendan Murphy said on Friday. 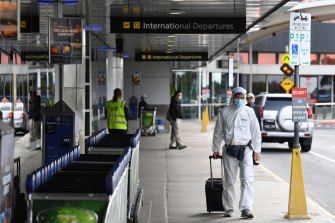 A man in personal protective equipment outside the international departures terminal at Melbourne Airport last week.Credit:AAP

“While most Victorians are voluntarily complying with requests to isolate, police have strong powers to enforce the direction if it’s required.”

But doctors are concerned that the system may be inadequate.

Melbourne GPs have told The Age that the system appears porous, with patients lying about their travel history and moving throughout the community while showing signs of respiratory illness.

A police spokeswoman said the force was working with the Chief Health Officer and the Health Department to enforce the self-isolation directive.

"We do however only want to do this by exception, and we are encouraging everyone to do the right thing," she said.

"We are currently working with DHHS to confirm an agreed process moving forward."

Other countries have introduced much more stringent measures to monitor recent arrivals. In Israel, the government has given approval to emergency measures to track people with confirmed or suspected coronavirus using mobile phone data.

On Friday, following a meeting with state and territory leaders, Mr Morrison announced increased social distancing measures, including a restriction of one person per four square metres for non-essential indoor gatherings of fewer than 100 people.

The Prime Minister also flagged further travel restrictions next week. The national cabinet is now meeting twice a week as the pandemic escalates.

Get our Coronavirus Update newsletter for the day’s crucial developments at a glance, the numbers you need to know and what our readers are saying. Sign up to The Sydney Morning Herald’s newsletter here and The Age’s here.

Tags: doors, in, knock, on, Police, searc
You may also like
Celebrities News