The coronavirus pandemic has revealed a number of vulnerabilities in the healthcare system in the U.S. while simultaneously taking a disproportionate toll on pregnant and birthing people. Whether its healthcare disruption, anxieties about how to give birth in hospitals that are in triage mode to marginalized demographics facing higher risks, the last year has shed a great deal of light on the maternal health crisis that has been going on the United States for decades and what the addition of a new threat — like a virus that can lead to severe illness in pregnant people, per the World Health Organization (WHO)— can mean for these already troubling outcomes. 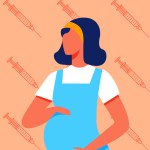 In a conversation with SheKnows Editor-In-Chief Eugenia Miranda Richman, Every Mother Counts (EMC) founder Christy Turlington Burns unpacked just a few of the ways the pandemic has left us with a “crisis upon a crisis” — giving insight into the maternal health issues that are longstanding threats to pregnant people and how the compounded harm of a global pandemic has not only laid them bare but exacerbated them.

“This has been a crisis that’s been building for a couple of decades now,” Turlington Burns said. “[In 2008] the United States was ranked 41st in the world for safe motherhood — and today we are placed 55th by the WHO. So we have continued to fall behind as the rest of the world has actually made pretty significant improvements. The crisis that we’re seeing…is around racial inequity.”

The stats Turlington highlighted are deeply concerning when it comes to medical racism and inequity in outcomes for Black and Indigenous parents. “We lose two women per day to complications of pregnancy and childbirth in the United States. About 60 percent of these deaths are preventable,” she said, adding that Black and Indigenous people are two to three times more likely to die from pregnancy and childbirth complications than white pregnant and birthing people.

“Clearly there’s a deeper conversation to be had around medical racism and some of the institutional biases that have either denied care to women, ignored their feelings and what they’re saying is happening in their own bodies or simply not respecting them, not making them feel welcome and not including them in the health system in a timely way that could make the difference between life and death at birth,” Turlington Burns said. “There obviously been some who have acknowledged that and have been researching the health disparities and racial disparities in this country for some time. But until the institutions themselves are held accountable, until policymakers are held accountable, it’s really hard to create the kind of change that is needed at the systems level to really make a difference for all people. So, yes, the information is incredibly important.”

Yet, the pandemic brought its own complications to this already dire situation. One review published in early 2021 that examined papers, news articles and peer-reviewed publications relevant to the well-being of pregnant people during the pandemic found that Pregnant individuals were “at a heightened risk of more severe symptoms than people who are not pregnant. Intrauterine, vertical, and breastmilk transmission were unlikely. Labor, delivery, and breastfeeding guidelines for COVID-19 positive patients varied. Severe increases in maternal mental health issues, such as clinically relevant anxiety and depression, were reported. Domestic violence appeared to spike. Prenatal care visits decreased, healthcare infrastructure was strained, and potentially harmful policies implemented with little evidence. Women were more likely to lose their income due to the pandemic than men and working mothers struggled with increased childcare demands.”

Turlington Burns mentioned some of these issues — along with the general confusion and uncertainty in the early days of the pandemic — as part of the motivation for EMC, a small but mighty NGO in the maternal health space, to stay nimble and on-message and on top of the fast-pace changes as more policy-makers understand the need for immediate evidence-based action.

“There’s been an unprecedented amount of legislation and introduced to reintroduce more recently around this issue and topic, which is an incredibly exciting thing to happen after so many years advocating on this issue. And so to not allow the pandemic to sort of stop or halt that movement has also been really important,” she said. “So our policy impact team has really been there to be the partners that they need to be to our policymakers and our lawmakers all along. And that’s been critical because as the new administration came in, we didn’t lose time because so many of those who are in the new administration or who were reelected into office this last term, they are already there. They’re already up to speed. They’re already a part of this.”

If you’re interested in finding out more about Every Mother Counts or supporting their work, visit their website everymothercounts.org.

Before you go, check out our essentials for staying sane while on bedrest: