Marsha Egan has a theory: You either control your email, or it controls you.

I have 21,000 unread messages – in my personal account, not others I use for work – so it’s safe to say I fall into the latter camp. Email overwhelm can be crippling: Good intentions to read every interesting newsletter or respond to old friends are flattened by a constant deluge of more, more and more messages, some marked “urgent” or accompanied by chains that take an hour to decipher. 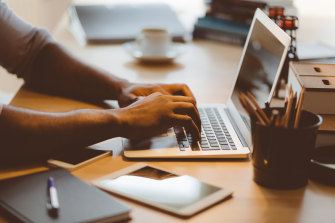 Think of your inbox as a garden you must prune by unsubscribing.Credit:iStock

“Email has become the biggest and worst interrupter the universe has ever experienced,” says Egan, a workplace productivity coach and author of Inbox Detox and the Habit of E-mail Excellence. “It’s cheap, it’s immediate, and you can copy 200 people if you want to.”

It’s also, many would agree, a giant headache and time suck.

Most employees spend about 28 per cent of the workweek reading and answering emails, according to one analysis. Maura Thomas, a speaker and trainer on individual and corporate productivity whose upcoming book is The Happy Inbox, says the first thing many of her clients do when they open their eyes in the morning is check their email. And the last thing they do before they go to bed at night is, you guessed it, refresh that inbox. “It’s super unhealthy,” she says – sweet dreams are not made of subject lines and BCCs.

Part of taking control of our email, Thomas and other experts say, is establishing boundaries around when we check it. Here’s advice on that and other ways to wrangle your inbox into order.

Check your email just a few times a day.
In a perfect world, Jim McCullen would check his email twice before lunch and twice after. If you want to adopt such a schedule, enlist some help. “Turn off automatic send and receive,” says McCullen, author of Control Your Day, which details an email productivity method based on David Allen’s Getting Things Done.

Most platforms allow you to temporarily delay new messages from arriving in your inbox. You can also use a tool like Boomerang, which holds your emails until you want to receive them.

Of course, not everyone has the luxury of checking their email just a few times a day, McCullen acknowledges. One potential solution: If you want to make sure you receive emails from, say, your top boss, set up an inbox rule that will deliver that person’s notes to your phone as text messages.

If your job requires more constant vigilance, aim to check your email “in between other things,” not while you’re focusing on one specific task, Thomas advises. (She discourages the use of second monitors, which many of us rely on to display our inbox.) And always process them in a batch, versus opening each email as it arrives.

Adhere to the four Ds.
Egan applies “the four Ds” to every email she receives: do, delete, delegate or defer. If you deal with an email within two minutes, do it. If it’ll take longer, defer – which is also known as triaging. Egan puts such emails into Folder A – which stands for “action” – and then sets reminders to return to them. You might also delete an email or delegate it to someone else. The key is to deal with each message before you move on to the next, rather than letting 10 (then 100) pile up unread. Treat your inbox as a place to receive and process messages, not store them. (If you do need to hold on to emails, as is often the case at work, that’s fine. Just don’t keep them in your main inbox, experts say. Move them to a “reference” or “old emails” folder.)

Turn off notifications.
Do you really need an alert for each new message? “Let me just end the suspense for you,” Thomas says. “You have mail.” Constant pop-ups or dings “just contribute to your habit of distraction,” she says. “It makes it really difficult to stay focused for any period of time, and it chips away at patience.” In addition to disabling notifications on your computer, she suggests doing the same for email on your phone.

Install useful browser extensions.
One of Thomas’s favourites is Throttle, which helps keep your email secure. Say you buy a dress from an online boutique and “you need to know when it ships, but you definitely don’t want to get five marketing messages a day from that point forward,” she says. You can use Throttle to create a unique email address for the purchase, and all related messages will then be sent there for you to view via a browser or app. Another benefit: If the store leaks your contact info, your personal email address won’t be compromised.

Don’t think of your inbox as a to-do list.
Lots of people make this mistake, says Matt Plummer, CEO of Zarvana, which helps professionals become more productive. Your inbox is a delivery tool; it doesn’t function properly as a place to itemise your tasks. Often, people think, “I’m going to need to respond to this email, so I should just leave it in my inbox,” Plummer says. That’s not effective. Instead, he recommends using a task-managing app like TickTick, which lets you log everything you need to do and integrate tasks with your calendar.

Get good at finding emails.
There are lots of ways to put your email search bar to work for you, Plummer says. For example, you can use Gmail’s advanced search to filter only those messages that contain a Google Drive link or YouTube video, or that CC of a certain colleague.

If you fall behind on emails – which happens to everybody, Plummer notes – there are easy ways to filter out messages you can quickly delete. For example, if you’re on Gmail, search “cc:me older_than:3d” to locate all emails you were copied on that are more than three days old. (These emails rarely require us to take any action, Plummer says.) Or search for calendar-notification@google.com, and delete all those emails letting you know that so-and-so is attending your meeting.

Unsubscribe aggressively.
Think of your inbox as a garden you must prune, McCullen says. Those newsletters you haven’t opened in six months? Unsubscribe. The place you once bought a hamburger from that now sends you deals every day? Unsubscribe. You can always check the website. Remember: Even looking at an email and deciding you don’t need it steals valuable time, McCullen says.

Don’t obsess over Inbox Zero.
Some people swear by this rigorous approach to keeping your inbox empty at all times, which was developed by author and podcaster Merlin Mann. Plummer supports the notion of clearing your inbox, but that doesn’t necessarily mean keeping it at zero. Instead, he suggests the single-touch rule. “Every time you read an email in your inbox, you move it out of your inbox,” he says. “Just become really disciplined about following that rule, and you’ll be in a much better place.” So – move those emails where, exactly? Plummer suggests sorting your messages into folders. For example, he has an “actions” folder for emails he needs to deal with soon. Another is labeled “readings,” for workplace announcements and other reference material. You might also find it helpful to dedicate folders to specific projects, teams or clients.

Much of achieving a healthier relationship with email depends on workplace buy-in. Here are tips that could help foster that with your colleagues.

Don’t use email for urgent communications.
If you have a question and need it answered within three hours, don’t make the request over email, Egan says. “Call somebody, stop by [their desk] and ask them, or use some other means,” like Slack. Relying on email for urgent needs or, for example, to send an agenda shortly before a meeting, suggests your colleagues can’t shut down their email without consequence.

Work with colleagues on best practices.
McCullen’s colleagues crafted an agreement that governs their messages to one another. “We all decided on certain things, like we’re going to make sure the subject line is clear, and we’re never going to copy someone’s boss without asking first,” he says. Another guideline: “If you add me to a message thread, don’t make me read five pages. Bullet out the key points for me at the top.”

Plummer says it’s crucial to always be clear about when you need a response. Otherwise, recipients will wonder, and perhaps feel undue pressure to act quickly.

Skip the late-night messages.
If you need to compose emails at 11 pm, fine – but schedule them to be sent during business hours. Thomas instructs her clients in leadership positions that this is an important way to respect their colleagues’ personal time. “If you’re sending emails late at night, your team is going to be checking their emails late at night,” she says. Even if you tell the recipients they don’t need to respond, “people will do as you do, not what you say.”

Tags: by, email, h, Here’s, overwhelmed
You may also like
Celebrities News