Ronnie O’Sullivan became the oldest player at 46 to win the World Snooker Championship and also equalled Stephen Hendry’s record of seven titles when he beat Judd Trump 18-13 in the final at the Crucible on Monday (Tuesday AEST).

O’Sullivan, who won his first title in 2001, broke the record previously held by Ray Reardon who won his sixth title at 45. 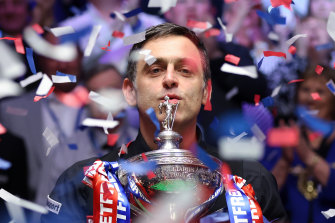 “I tried to be as relaxed as I could but that is probably the greatest result I’ve had against somebody like Judd,” O’Sullivan told BBC TV, describing Trump as an “all-time great”.

“I’ve never bothered about records. When you get them, it’s kind of nice. I’ve never performed well if going for that, I’ve just tried to enjoy my game. I don’t have targets.

“I’ve loved every tournament this year, I’ve just loved playing. I like to win but it’s not the be-all and end-all. The Crucible brings out the worst in me – it’s probably not the best idea but we’ll probably go again next year.”

Trump congratulated O’Sullivan, saying he was the “best player of all time”. 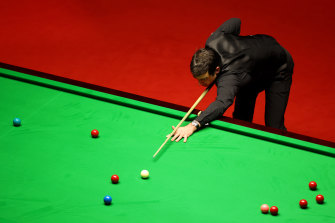 Judd Trump described his conqueror O’Sullivan as the ‘best of all time’.Credit:Getty

“It’s been a pleasure to share a table with him. It’s an amazing achievement,” he said.

“He keeps getting better and better. His determination and dedication are clear to see. He’s been the best player this tournament by quite a distance. I was just glad to make a match out of it.”