Oppo has announced the Oppo Watch – it’s first ever wearable that was initially teased at the firm’s Innovation Day conference back in December.

In a Twitter post, the firm not only announced the name of the product but also showed off its design from the front. The Oppo Watch will sport a square chassis complete with what appears to be an OLED display and buttons on its side that will presumably be for navigation.

The wearable is shown in both black and gold colours, each of which have complementary straps. The image also confirms the device will be capable of taking phone calls, although it’s unclear if this means the device will have built-in cellular capabilities or if it’ll need to be paired with a phone for this to work. Of course, it’s also possible the Oppo Watch is offered in Bluetooth-only and cellular variants.

Although there’s so much we still don’t know about the Oppo Watch, it’s clear the firm’s hardware team in Shenzhen had the Apple Watch plastered all over their mood board when they were putting it together. At first glance, you’d be forgiven for thinking this is the Apple Watch Series 5.

Of course, if you’re going to pinch a few ideas from a competitor when creating your first smartwatch, why not do so from the best out there? The Apple Watch is comfortably the most popular smartwatch on the planet. 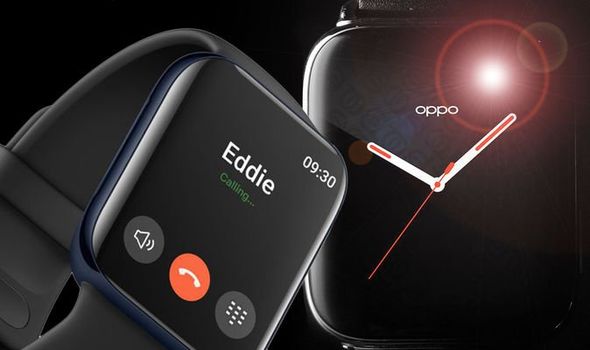 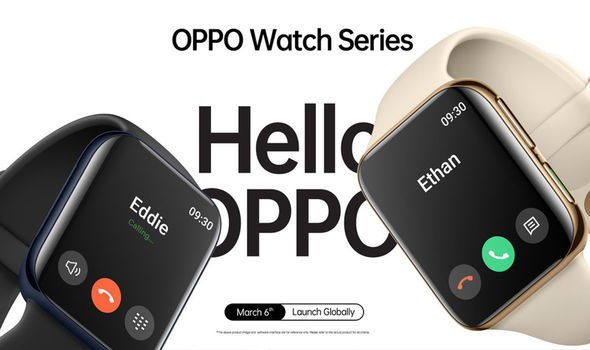 All of this begs the question – will the Oppo Watch be able to stand toe-to-toe with the Apple Watch? Well, based on Oppo’s marketing material for the device, it certainly has the aesthetic. However, whether the Oppo Watch will go down in history as a great device in its own right or a throwaway Apple Watch clone will depend on how it performs.

It’s currently unclear what software the Oppo Watch will run, what internals will power it or what it’ll cost.

We’re expecting the Oppo Watch to either come pre-installed with a heavily modified version of Google’s Wear OS software or come with a proprietary operating system from Oppo itself.

Oppo has announced it will unleash the Oppo Watch alongside its newest flagship smartphone – the Find X2 – this Friday, March 6.

The Chinese firm’s keynote will kick-off at 9.30am UK time. Express.co.uk will be covering proceedings live, so stay tuned for all the latest announcements.

In the meantime, you can find out while we’re so excited about the Oppo Find X2 here.