Olivia Rodrigo brought the house down at ‘SNL’ for her first-ever performance on the May 15 episode, alongside host Keegan-Michael Key.

Olivia Rodrigo, 18, has arrived! The High School Musical: The Musical: The Series star just slayed her Saturday Night Live debut with song “drivers license.” She belted the song out on the stage of Studio 8H, with just the backing of a piano. “I got my driver’s license last week/Just like we always talked about/’Cause you were so excited for me/To finally drive up to your house,” she crooned. Olivia stunned in a silk slip dress with a pink polka dot print, throwing it back to the 2000s with her glossy lips and sparkly eyeshadow. At one point, the stage illuminated red — elevating her feelings of hurt and jealousy on the track.

The Temecula, California native went viral in early 2021 with her signature single. Shortly after dropping, the emotional and relatable tune — which she co-write with producer Dan Nigro — the song broke the record on Spotify for being the most daily streamed. Social media success quickly translated to chart success, taking her to the number one spot in countries like the United Kingdom, Australia and Norway. 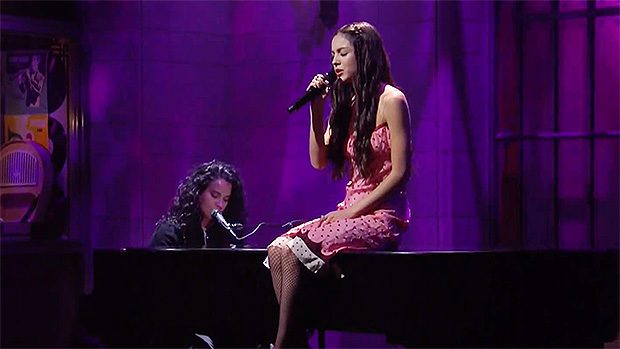 Olivia opened up about her massive success in several interviews this year, including a cover feature on Interview magazine. “Everything is happening so, so, so much sooner than I could have expected. I didn’t have any expectations for ‘Drivers License,’ but even if I did have them, I think what actually happened would have just exceeded any of my wildest dreams,” she reflected. “It’s been something I’ve given a lot of thought to, that Disney-girl archetype. I feel like there’s such a clear trajectory for what that is, and there’s so many amazing artists who have done it before me. I have just always been a big songwriter,” she said of herself, adding she wants to be “as real as I possibly can.”

The breakout star has since followed “drivers license” up with “good 4 u.” On the romance driven tune, the teen addresses an ex who moved on from their relationship without much care for her feelings (an all too familiar and relatable tale for many). Both songs are expected to appear on her debut album Sour, which officially hits streaming services on May 21. “SOUR comes out so soon! rn there are a bunch of things for sale on the shop! i also made a little zine with bits of my diary and little stories about how I wrote all the songs. I’m so mf excited!!!” she wrote via Instagram on May 15.

Tags: saturday night live
You may also like
Celebrities News