Good for you, Olivia Rodrigo! 2021’s biggest pop star — who was the 1st winner of the night — made her MTV VMAs debut with an eye-catching red carpet outfit.

It’s time for her big moment! She’s had the biggest hits hit the airwaves in 2021, so it’s no surprise that Olivia Rodrigo is one part of the incredible line-up set to hit the stage at the MTV Video Music Awards on September 13th. Arriving on the red carpet in style, Olivia opted for a long, strapless peachy pink gown for her first VMAs.

She matched the gown with pink platform heels and these incredible bedazzled butterfly earrings that nestled beautifully in her long, brown hair. “It’s so exciting! The energy is incredible,” Olivia said while being interviewed by MTV ahead of the show. Also before the show kicked off, she won her first Moonperson, and the first Moonperson of the night, for Best Push Performance of the Year. Teasing her first performance at the show, she promised that it would be ‘super fun’ with tons of ‘dancing and sparkles’ and maybe even a bit of flying! 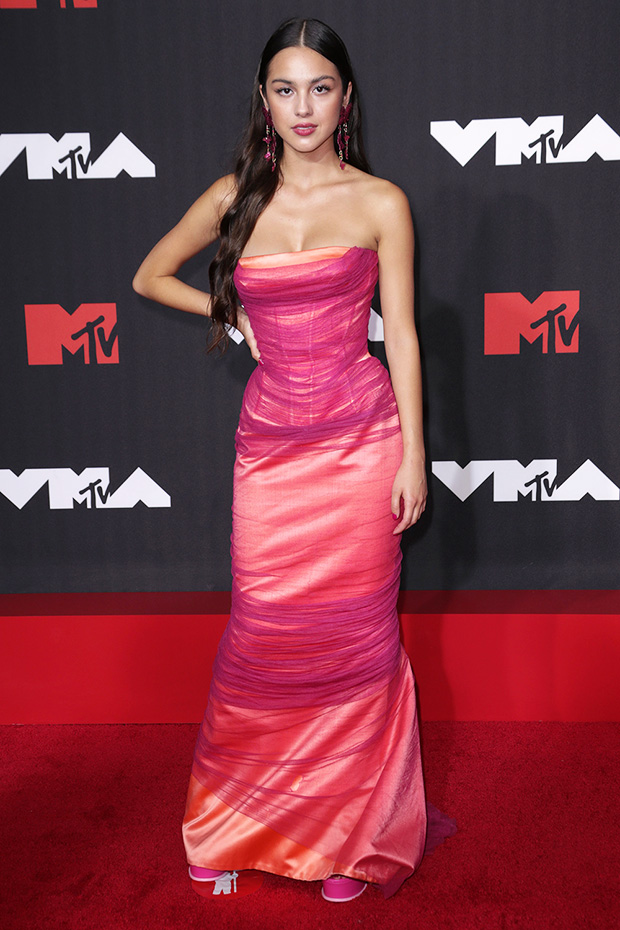 Ahead of the show, MTV’s official Instagram shared a little sneak peek of another glam outfit, posting just a Polaroid photo of lavender colored satin gloves. She held her arms up to the sky in the image, which was followed up by a photo of a disco ball teasing her upcoming (and highly anticipated) performance.

It’s sure to be a big night for Olivia, who was crowned the first winner of the night: the teen walked away with Moon Person for her song “Drivers License” in the Push Performance of the Year category. She’s also nominated in four others, including New Artist and Song of the Year for Driver’s License. Even if she loses in the big categories, she’s part of the best lineup of performers at the VMAs in years. She takes the stage alongside Lorde, Lil Nas X, Machine Gun Kelly and Camila Cabello.