Louise Costi joked with her staff on the afternoon of June 26.

NSW Premier Gladys Berejiklian had just announced what was promised to be a two-week lockdown to get on top of a COVID-19 outbreak in Greater Sydney that on that day numbered 29.

Costi, who runs The Place Hair Studio in the Cronulla mall, remembers the debate among her fellow hairdressers. 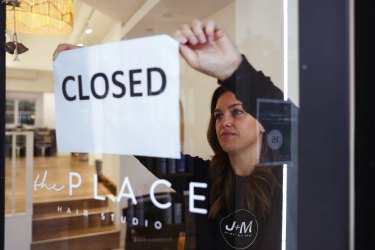 Louise Costi has, along with many small businesses, been forced to close the doors of her Cronulla hair studio.Credit:Dominic Lorrimer

That was nine weeks ago.

Since then, Costi has endured hours of Service NSW on-hold-music waiting to access government support to help pay the rent on the business that sits just a stone’s throw from the office of local member and prime minister, Scott Morrison.

She and her husband have had to eat into their savings they’d hoped to put toward a “forever home” for them and their two young children.

She has now had to give up on buying that forever home because her bank wants to see confirmation of the reopening of the business. A confirmation no one can give.

The situation facing Louise Costi and her three staff is being played out across suburbs and towns in a country that just a few months ago Morrison declared was the envy of the world for the way it had dealt with the economic and health fallout from the pandemic.

On June 2, the March quarter national accounts showed the economy expanding by 1.8 per cent through the first three months of the year.

Melbourne at the time was a week away from coming out of its fourth lockdown. Interstate travel was largely unhindered and people were flying to New Zealand as part the trans-Tasman bubble.

At his press conference to discuss the national accounts, Treasurer Josh Frydenberg boasted Australia was out-performing the rest of the world with the economy larger now than before the pandemic. 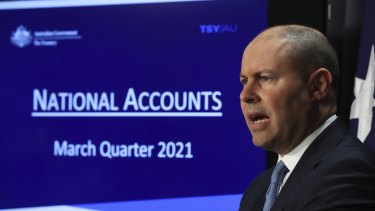 Josh Frydenberg on June 2 talking up Australia’s economic recovery from COVID. He now faces a sharp fall in GDP due to the current lockdowns.Credit:Alex Ellinghausen

“Businesses are responding to our policies to invest and to hire. Our economic plan is working, but the job is not done. But you wouldn’t want to be in any other country, but Australia,” he said.

In a few months’ time, he is likely to be eating humble pie when the September quarter national accounts show a contraction in output of at least 2 per cent and perhaps as much as 3.5 per cent. That would be more than enough to more than wipe-out all the economic gains of the past 12 months.

The economic narrative of the government, which must head to the polls by May, has been dealt a critical blow. And it’s partly due to the success that Australia enjoyed in dealing with the pandemic that the country now finds itself facing an economic reckoning.

In terms of the number of COVID-19 cases, Australia along with a handful of other – mostly island – nations had been in a league of its own.

On the day Frydenberg talked about the health of the economy, Australia’s COVID-19 case load was just 0.5 per one million residents. By contrast, it was between 50 and 62 cases per million residents in Britain, the US and Canada.

Lockdowns and the closure of the international border has seemingly kept the country safe from COVID-19. The strong health result had fed into the economic outcome that was assisted by hundreds of billions of dollars worth of federal and state government assistance.

All of this money, and the absence of mass caseloads and mass deaths, had delivered the outcome trumpeted back at that June 2 press conference.

And then it all changed. 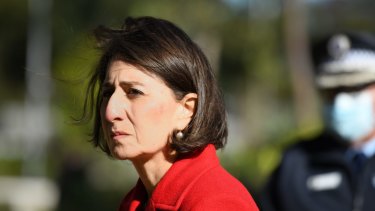 NSW Premier Gladys Berejiklian on the day she announced what was hoped to be a two week lockdown of Greater Sydney. Nine weeks later, the economic costs of the decision are growing.Credit:Jacky Ghossein

There are now 15 million people in lockdown in our two biggest cities and our two largest economies.

According to the bureau of statistics, the number of people collecting a pay packet in the Greater Sydney area has collapsed by more than 9 per cent since the start of lockdown. That’s several hundred thousand people.

The rhetoric of the Morrison and Berejiklian governments has adjusted to the new circumstances. The claims of success have now been replaced by Croods analogies with the focus squarely on when 70 per cent and 80 per cent of the population is fully vaccinated. The current full vaccination rate is just above 32 per cent.

But not everyone is convinced.

The Commonwealth Bank’s head of Australian economics, Gareth Aird, had been particularly upbeat about the nation’s recovery from the pandemic.

Just a couple of months ago, he argued so strong was the recovery the Reserve Bank may have to start lifting official interest rates towards the end of next year to deal with inflation and resurgent wages growth. 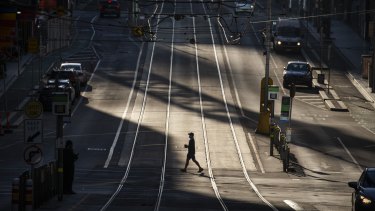 The spread of Sydney’s COVID outbreak to Melbourne forced a lockdown there that amplified the economic fallout of the pandemic.Credit:Paul Jeffers

But the Sydney and Melbourne lockdowns have turned that forecast on its head.

While our political leaders want to start focusing on the number of COVID-19 people ending up in hospitals (rather than total cases) once the vaccination targets are reached, Aird thinks Australians will keep a keen eye on infection levels.

“If we’ve got thousands of cases a day, then I think that does make a difference to how people act. People are going to be saying, I don’t want to catch the train or the tram to work, I don’t want to get on the bus and be close to people,” he says.

The NSW and federal governments are pushing the message that Australians need to “live with COVID”. That’s after telling Australians how great a job they’ve done not having COVID-19 in the community for the past 18 months.

“For the first time Australia will experience living with COVID. This is likely to mean that there will be a significant period of adjustment for households and businesses as the virus circulates within the community in large numbers and hospitalisations rise,” Aird says.

“It will mean that the economic recovery, at least initially, will be a bumpy ride.”

While the federal government is keen for states to end lockdowns, it has overseen the largest of all lockdowns – the closure of the international border.

Almost 26 million Australians have been told they can’t leave their homeland. 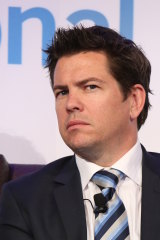 The economic cost of that border closure is growing.

Australia’s strong population growth of the past 20 years has been built on migrants. Two of every three extra people in the country over that period has come via immigration.

It’s one of the reasons the economy grew through that period, as more residents need housing and food and clothes and schools and cars.

But population growth has come to a standstill as migrants can’t get into the country.

HSBC Australia chief economist Paul Bloxham says the drop in population growth means the nation’s economic speed limit has actually been reduced by COVID-19 and the restrictions put in place to stop its spread.

For the past decade or so this speed limit – technically called the potential growth rate – has been around 2.5 to 2.75 per cent.

Bloxham thinks right now, in large part due to the collapse in population growth, the rate at which the Australian economy can expand without generating inflation pressures has fallen to between 1.3 per cent and 1.6 per cent.

That will recover, but over the medium-term this potential growth rate may have slipped to between 2.25 per cent and 2.5 per cent.

Each percentage point is the equivalent of $20 billion in economic activity and thousands of jobs.

“A potential consequence of a lower potential growth rate, particularly for monetary policy, is that slower rates of growth may generate more inflation. However, lower trend growth and higher inflation are clearly not an ideal combination,” he says.

That would also put pressure on the federal budget. Despite record levels of debt, the interest bill on that debt is manageable due to low interest rates. But if interest rates start to climb, a likely scenario if economic growth picks up, then the federal government’s debt burden will grow.

Not that the future of interest rates is on the upper most of the minds of local businesses trying to stay afloat. 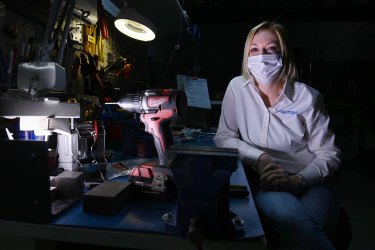 Aga Blana, with up to half of her staff in lockdowned parts of Sydney, says the light at the end of the economic tunnel could be an oncoming train.Credit:Kate Geraghty

Executive chairperson of mining safety and supply company Nautitech, Aga Blana, spends much of the start of her working day looking through public health orders and then checking if there have been any amendments.

While her business sits in the Sydney suburb of Castle Hill, more than half of the staff who need to work from the office are in local government areas under NSW lockdown orders.

Blana says even before the local lockdown, business was tough because of the international border closure which made it more difficult to develop overseas markets.

“We’re competing against companies that are in countries that have learned to live with COVID. We haven’t yet,” she says.

According to Blana, businesses just want some certainty.

“We need a clear pathway, knowing what happens when we hit certain targets. It is a tunnel but there’s no light at the end of it, and if there is, it’s a train coming straight at us.”

Tags: 'No, cost, covid-19, Joke, of, the
You may also like
Celebrities News