Did duckbilled dinosaurs migrate from Asia to North America? New species found in Japan dating back 72million years REVERSES the route by which the creatures spread around the world

A species of duck-billed dinosaur has been discovered in Japan which rewrites what we know about how hadrosaurs spread around the world.

It was previously believed hadrosaurs — known for their broad, flat snouts —  migrated from North America to Asia before going extinct 66million years ago.

But the fossilised remains of a never-before-seen species dubbed Yamatosaurus izanagii reveals the route was in fact the other way round. 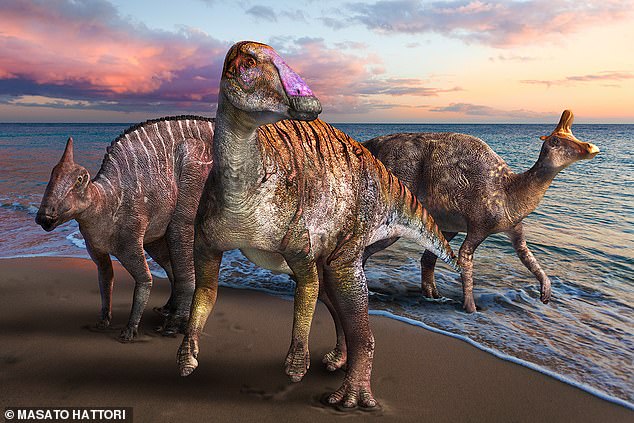 The new discovery of fossilised remains of a never-before-seen dinosaur species dubbed Yamatosaurus izanagii (pictured, artist’s impression)  reveals the route of migration for hadrosaurs was from Asia to America

WHAT ARE DUCK-BILLED DINOSAURS?

Duck-billed dinosaurs, also known as hadrosaurids, were the most common herbivorous dinosaurs at the end of the Mesozoic Era, and all had a similar-looking snout.

The front of the jaws of the hadrosaurids meet in a U-shape to support a cupped beak used for cropping plants.

Some species have a much wider shape than others but there is so far no evidence it altered the feeding style.

The main group of duck-billed dinosaurs in this category are known as Saurolophidae.

Hadrosaurs had rows of flat teeth close together which were used to grind up and chew various forms of vegetation.

When these teeth were worn down to a nub or fell out, they were replaced by fresh dentition which lay in reserve in the gums.

This ability means duck-billed reptiles were able to thrive across the world and fossils have been discovered in Asia, including Japan, as well as Europe, Africa and North America.

However, understanding how the vegetarian dinosaurs emerged and spread across the world has proven difficult in the past.

Hadrosaurs lived during the Cretaceous period, the most modern dinosaur period when they went extinct due to a huge meteorite impact 66million years ago.

But Yamatosaurus izanagii is believed to be around 72million years old.

Analysis of the new species revealed it looked different to other hadrosaurs, with notable differences with the teeth and limbs.

For example, instead of having several replacement teeth for each dental position in its mouth, it had only one backup for certain teeth.

It was also likely bipedal, plodding on two legs instead of four.

These indicate that the Japanese duck-billed dinosaur, which was first found in 2004, is an early hadrosaur which represents a transitional point in the evolution of the plant-eating giants.

Dr Anthony Fiorillo of Southern Methodist University in the US, co-author of the study, believes dinosaurs in Asia likely spread to the Americas via the Bering Land Bridge.

The dinosaur is the second new species of hadrosaur discovered in Japan, which was attached to mainland Asia at the time of the dinosaurs.

‘These are the first dinosaurs discovered in Japan from the late Cretaceous period,’ says Yoshitsugu Kobayashi, professor at Hokkaido University Museum and co-author of the study.

‘Until now, we had no idea what dinosaurs lived in Japan at the end of the dinosaur age.

‘The discovery of these Japanese dinosaurs will help us to fill a piece of our bigger vision of how dinosaurs migrated between these two continents.’

The findings are published in the journal Scientific Reports.

Tags: Dino, duckbilled, new, of, species
You may also like
Celebrities News