Less than five months after it axed the long-running Marngrook Footy Show, NITV-SBS has revealed its replacement, Yokayi Footy – billed as “a new take on a traditional football panel show”.

Taking its name from a Noongar word meaning “shout of victory”, the new show will be co-hosted by Tony Armstrong, Bianca Hunt and Darryl White, with a promise to “bring AFL debate and conversation to the table through a unique and youthful Indigenous lens”. 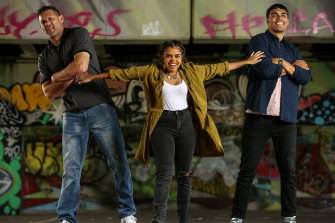 Former Marngrook regular Gilbert McAdam will be part of the lineup, filing reports from Indigenous communities and hosting regional AFL games on NITV throughout the season.

The show, which will premiere on March 18, is the product of a new partnership between the AFL and NITV forged in the wake of the two documentaries on Adam Goodes released last year that highlighted the lack of Indigenous voices within the footy organisation at the time the Sydney Swans star was being subjected to a sustained campaign of vilification.

It also represents a more concerted effort to acknowledge the incredible contribution and importance of Indigenous Australians as players and fans of the game.

The panellists exemplify that contribution on field and off.

Darryl White was a triple premiership player with the Brisbane Lions and a member of the Australian Indigenous Team of the Century.

Hunt is an advocate for AFLW and Indigenous Australian leadership in the wider community.

The AFL’s general manager of social policy and inclusion, Tanya Hosch, has led the push to increase Indigenous voices in the media. That effort has resulted in the likes of McAdam boundary riding regularly for Channel Seven’s football coverage in 2019 and Gavin Wanganeen appearing as an occasional expert for Fox Footy.

Hosch this week again met with the AFL’s broadcast partners across television and radio to follow up on their efforts to increase Indigenous Australian representation in the media.