The costs to taxpayers of the National Disability Insurance Scheme was forecast four years ago to hit $30 billion by the federal government’s peak economic advisory body, in modelling that runs counter to Prime Minister Scott Morrison’s warnings that it is growing faster than expected.

Today’s federal budget is expected to show the Commonwealth’s contribution to the scheme will increase by $13.2 billion between this year and 2023-24, with the program to top $30 billion in 2024-25. 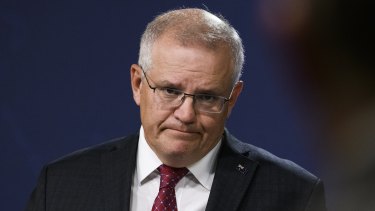 Prime Minister Scott Morrison warned the NDIS faced cost blowouts, but the scheme is on track with forecasts from four years ago.Credit:Rhett Wyman

Mr Morrison last week warned the scheme faced further blow-outs unless new integrity measures such as the contentious independent assessments were implemented and raised fears over its sustainability as wage bills and costs increase more than was ever expected.

New NDIS minister Linda Reynolds has also warned the government faces “hard discussions” ahead regarding the sustainability of the current funding model, which she told The Guardian was on the trajectory of “being more expensive than Medicare”.

Analysis of a 2017 Productivity Commission report shows the scheme was forecast to reach $30 billion by 2024-25, which means it remains on track with projections of four years ago. It also forecast costs would grow above inflation and wage growth.

The amount contributed by the Commonwealth was also always expected to rise, with PC forecasting 56 per cent by 2028. This financial year the Commonwealth will meet 55 per cent of participant support costs nationally, which will lift to 58 per cent next year.

The review also said the federal government should shoulder more of the weight over time because it had a better tax base than the states and territories. It also urged the government to balance scheme costs with rigorous analysis of scheme benefit. 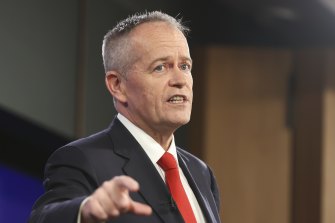 “Now it turns out that has just been pearl-clutching kabuki theatre when they knew all along the NDIS is tracking just as predicted,” Mr Shorten said.

“The Liberals knew this when they ripped $4.6 billion dollars out of the scheme calling it an underspend. And they know it now as they hype fake blowouts to justify further cuts and privatisation through compulsory independent assessments.”

Mr Morrison told the Australian-Israeli Chamber of Commerce last week the scheme, which was established by the Gillard government in 2012 with Coalition support, was forecast to reach 530,000 participants in the coming years.

He said a 12.5 per cent growth in payment per participant each year since 2017 was in part the result of planners not having access to consistent, quality information when making their funding decisions, as well as a lack of clarity on what was and wasn’t paid for by the NDIS.

He said proposed reforms through independent assessments and personalised budgets were designed to make the NDIS “fairer and more sustainable” into the future and the government was committed to funding it as a demand-driven scheme.

“Reasonable and necessary supports come with some boundaries. Boundaries to ensure the scheme is affordable, but more importantly so it is fair for all participants,” Mr Morrison said.

In an interview with the ABC, Mr Frydenberg said the federal government was “absolutely committed” to NDIS and would continue to “fully fund” the scheme.

“This has been a program that has changed lives, not just for people with disabilities but for their families as well,” Mr Frydenberg said.

Tune in on Tuesday from 6.30pm for our live coverage of the 2021 federal budget.

Latika Bourke will wrap up the latest news, analysis and reaction in our live blog. Watch the Treasurer’s speech live just after 7.30pm.

Our expert team, including Shane Wright, David Crowe, Peter Hartcher, Ross Gittins, Rob Harris and Jessica Irvine, will explain what the budget means for you, the economy and business.

Tags: bu, forecast, NDIS, on, Track, with
You may also like
Celebrities News