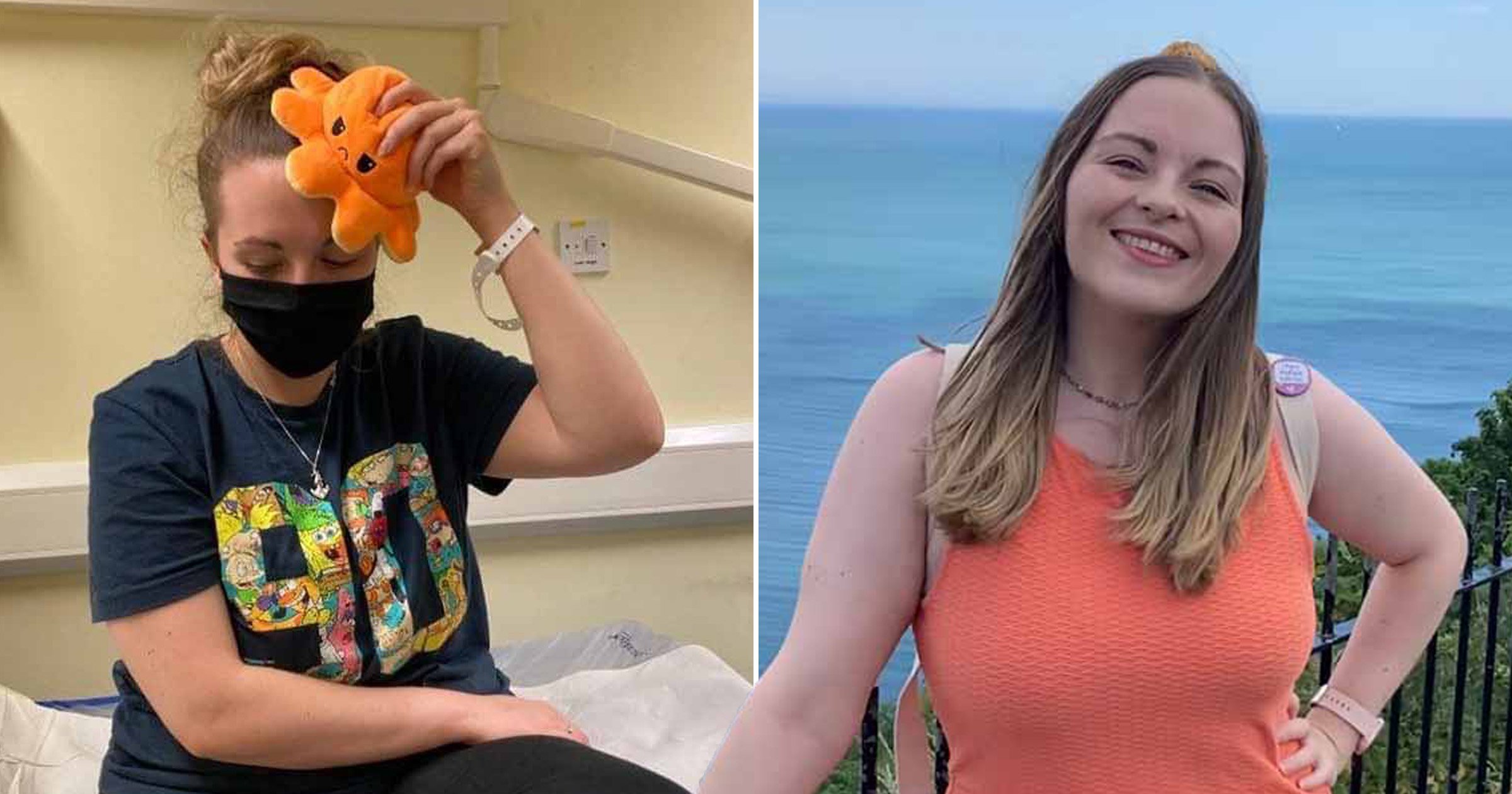 When Lauren Percival started getting headaches aged 15, she was prescribed glasses.

Headaches are a common symptom of uncorrected short-sightedness, so she chalked it down to that.

The debilitating pain persisted over the years, but Lauren thought this just meant she needed stronger lenses – until an optician found there had been no change in her eyesight.

‘I have always assumed any recurrent headaches were linked to needing a new prescription for my lenses,’ Lauren said.

‘Over time, though, my headaches have got progressively worse to the point where I can’t work at the moment, as the pain is too severe.’

Now aged 29, Lauren made a shocking discovery – in the form of an eye test. The optician examined Percival’s retina using an optical coherence tomography (OCT) test and discovered something called quadrantanopia, a loss of vision in one of the quarters of the visual field. Quadrantanopia can indicate multiple sclerosis (MS).

Lauren was referred to Torbay Hospital, where it was confirmed that she had MS – a lifelong and potentially disabling condition which affects the brain and spinal cord.

‘It came as a complete shock. I never expected to be diagnosed with something like MS,’ Lauren reflected.

Everything became clear back in November 2021, when Lauren fainted. She felt awful, she says, and overheated.

She continued: ‘I vomited and ended up fainting. I went to bed and the next day, my headaches were even worse.

‘By the day after that, I woke up with blurred and double vision.

‘The light was hurting my eyes and I was also having balance issues and memory loss.’

She walked to her local Specsavers, convinced she needed a new prescription. She had an emergency appointment the next day, where they found the quadrantanopia.

They told her it could possibly be a stroke, but – due to her age – was more likely the first attack of MS.

At Torbay Hospital, they tested her eyes, blood, and coordination and collected spinal fluid for testing.

‘They couldn’t pin down what was wrong with me,’ she recalled. ‘They wanted to keep me overnight, but agreed to let me go home when I promised to return the following morning for an MRI scan.’

The MRI, which scans the brain, showed some ‘sort of smudge’ on her brain. She was given five-day course of high-dose steroids and no diagnosis.

They worked to ease her symptoms, which seemed to ease my symptoms until she relapsed in January this year.

A new MRI scan found lesions on her spinal cord, and Lauren was diagnosed with multiple sclerosis.

Lauren will now inject herself at home as part of disease-modifying therapy, which can make her more susceptible to things like chest infections, colds, and flu-like symptoms.

MS affects everyone differently. She said: ‘I have good days and bad days but I’m in a certain amount of pain every day.

‘I struggle mostly with my peripheral vision, which affects my mobility, because I can very easily walk into something or someone not knowing they’re there. I struggle with double vision too.

‘I don’t drive, but I wouldn’t be allowed to if I wanted to now.’

Doctors believe Lauren went undiagnosed for three years. Had her optician not investigated her symptoms, she could have lost more of her vision.

‘I’m grateful to have been diagnosed when I was, as my MS could have progressed without me knowing,’ Lauren said. ‘If you notice anything unusual about your vision, I really urge you to get your eyes checked.’

Simon Simmonds, Ophthalmic Director of Specsavers’ Torbay branch, confirmed that optometrists are able to pick up the early signs of a person’s condition.

He continued: ‘It’s essential that people keep up with their regular eye-health checks, because not everyone realises that a sight test is more than just showing someone that they need a new prescription for their glasses or not.’