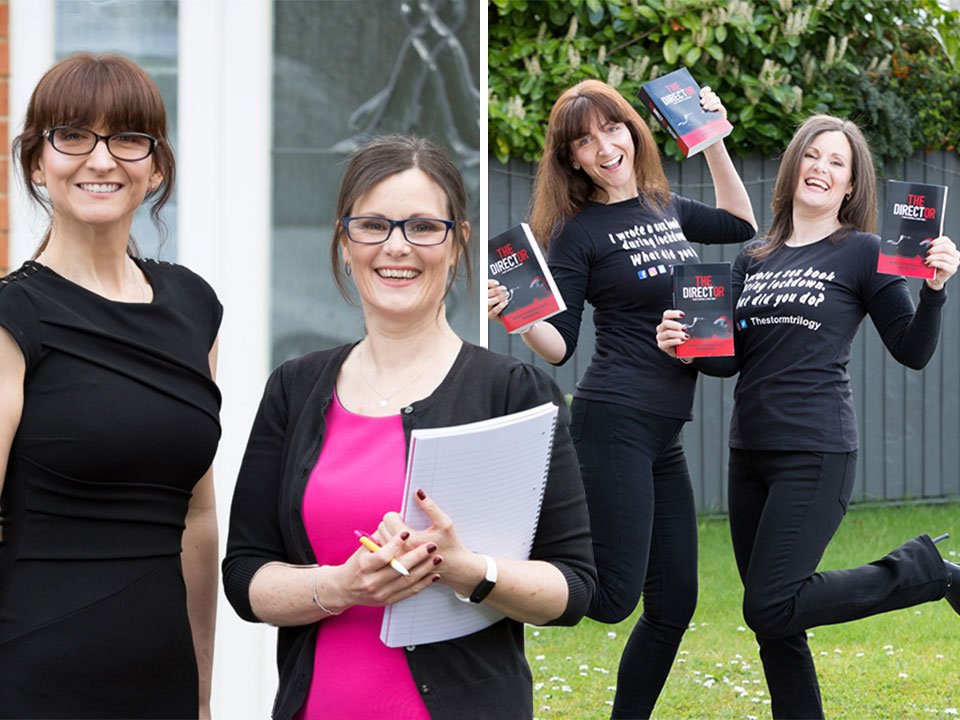 Mum Stacey Campbell, 35, was first inspired to pen The Director, their literary debut, by another friend who had recently separated from her husband.

This friend had shared stories of her dating antics with Stacey, who then shared them with her friend and colleague Tracy Firks, 48.

Stacey, who lives close by Tracy in Bristol, said: ‘It was the beginning of last year when I began to think about writing a book.

‘It was just before the pandemic hit, my friend was going through a separation with her husband and had just started to get back on the dating scene.

‘She was sharing some funny things that have happened to her on dates.

‘I’d said to Tracy, “some of the stuff she’s telling me is so funny you could write a book on it.”

‘Tracy replied to me, tongue in check, “Well go on then.”‘

Thus, The Director was born, and Stacey began writing in between working and raising her seven-year-old daughter Maisie.

She said: ‘I’m either at work or doing the school run. I’m a busy working mum, but when we went into lockdown, all of a sudden, I had a lot of time on my hands.”

The book is about a woman in her thirties who, having found herself back on the dating scene after a divorce, is invited by a male friend on a sexy weekend away in Las Vegas.

This friend of hers plans on making the trip very memorable indeed, with steamy encounters all over the notorious Sin City.

‘It’s sexy, but it’s funny too,’ said Stacey. ‘There’s a storyline about a mishap with latex body paint and they play a sexy game of roulette. It’s a lot of fun.’

However, by the time she got to the end of her first draft, she realised the book was missing something vital – actual sex scenes.

She said. ‘I didn’t even know where to start.

That’s when she turned to Tracy for assistance.

Stacey said: ‘I’d known Tracy for ages, and we were pals before we worked together, so I knew she’d help if she could.

‘To my delight, we became the perfect team. I wrote the funny and emotional bits and Tracy wrote the sexy stuff.

‘When Stacey had trouble writing the sex scenes, I was happy to help,’ said Tracy.

‘I wrote out a full sex scene for her, then told her to use it as a template for the other scenes.

‘Stacey had a read of what I’d written and was on the phone straight away, screaming about how good it was and begging me to write the book with her – so I did.

‘I started out helping with the sex scenes and then came onboard with the story writing too.

‘We’re great mates, we live really nearby and work together, so this has just added to our friendship.

‘It’s been a very funny experience and we’re hoping everyone likes the book.’

‘We bounced ideas off each other, trying to make each other laugh.’

By June, The Director was finished and on March 31, it was published by boutique publishing house, Discover Your Bounce, and is available to buy on Amazon for £14.99.

Stacey was delighted with the book also got her inspiring friend’s seal of approval.

Now, Stacey and Tracy are planning to follow The Director up with two more books, calling the series The Storm Trilogy.

‘We were a bit nervous about showing her, but she’s in the process of reading it and, so far, she loves it,’ said Stacey.

‘We just wanted it to be a fun read for other women and we’re hoping we’ve achieved that.

‘There’s a running storyline throughout the saga and more will be revealed in book two.’

The Director has also got rave reviews from family and friends, with Stacey saying: ‘Anyone who has read it has said they couldn’t put it down.

‘It’s the best compliment we could ask for. One person even said it made 50 Shades of Grey look like Mary Poppins!

While the pair are currently both single, writing their book has inspired them to get back in the dating game.

Tracy said: ‘Neither of us are dating right now, especially with lockdown, but I’m hoping once the restrictions ease to get back out there.

‘I suppose there was nothing better to do really, during the pandemic, than write a steamy book, as we couldn’t go dating!’

Tags: Coronavirus, friendship, sex
You may also like
Celebrities News