Australians stranded overseas could get a lifeline with the Prime Minister asking key ministers to come up with options to help citizens who can't get home. 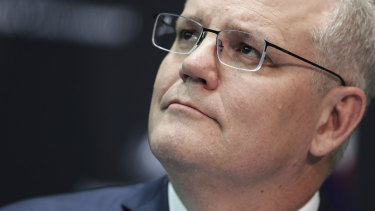 "We acknowledge that some of them are in some difficult circumstances," he said.

There are about 18,800 Australian residents overseas who have told embassies they want to return home. But international arrivals to Australian airports are capped at just under 4000 people a week.

Mr Morrison said national cabinet would review those caps every fortnight but had decided on Friday to leave them as they were. He hopes to expand them once the community transmission of coronavirus in NSW and Victoria comes under control.

"We’ve got tens of thousands of people who have been going through quarantine as well from overseas. That has particularly been done by the NSW government," he said.

"Right now, as they’ve been seeking to get on top of that outbreak … it is not the wise decision to lift those caps."

Spokespeople for the three ministers were unable to provide details of options being considered to help Australians stuck overseas.

In total, 371,000 Australians have returned home from overseas since mid-March when the government began urging them to do so.

But many have found themselves stuck as the number of commercial flights dwindle and ticket prices skyrocket.

Anas Ajaz, from Sydney, farewelled his wife Alveena Saher and two young sons in January for what they thought would be a short trip to visit family in Pakistan.

Mr Ajaz's youngest son was three months old when the family left, and this week Ms Saher sent a video of him starting to walk.

"NSW has done a great job in strictly following the all the safety protocols and limiting the spread of virus. Why can’t we keep doing a wonderful job and minimise the inflow of returning Australians to a sustainable level where airlines can still make profit?"

Department of Foreign Affairs officials revealed this week the government has organised 64 repatriation flights since January, helping to bring 27,000 Australian residents home. The majority of those were from India, with 45 flights carrying 8000 people.

The first flights took people from China's Wuhan province, where the coronavirus originated, to quarantine on Christmas Island. In February, passengers from the Diamond Princess cruise ship who became stranded in Japan were taken to Howard Springs in the Northern Territory to quarantine.

A department official said the government had limited leverage with commercial airlines to get people onto flights. The government has also given emergency loans to 390 travellers, for an average $3400, mainly to pay for flights.

Tags: at, looking, Morrison, options, to
You may also like
Celebrities News