From their second video date, which went for almost four hours, Brie and Luke O’Loughlin both had the feeling they’d found their person. They were right: 11 months later, they were tying the knot.

“I don’t know if it was love at first sight, but it was such a deep connection that I can’t explain,” says Brie, explaining they’d spent that night in June 2020 discussing their goals, their values, their family histories, their Christian faith. “Stuff that you can take years to unpack.” 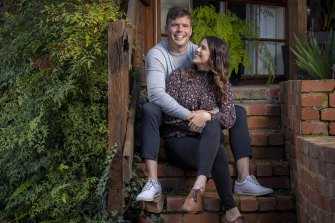 Over the next four months in Victoria’s second lockdown, they got to know each other intimately through daily virtual dates on FaceTime, before meeting for the first time in October when Brie, 36, surprised Luke, 32, with the help of his parents.

“I literally ran up and jumped on him like a koala, and he spun me around and then we both cried.”

From then, they were inseparable. Luke proposed in February this year.

“What’s the purpose of waiting if you know they’re the one you’re going to be with? It’s like we’d done two or three years of dating in five intense months,” Brie says. “We decided we’re each other’s human.”

Their wedding day was in May, something they stress they don’t take for granted given current COVID-19 restrictions.

They believe that meeting online during the pandemic meant they got to know each other in an entirely different way, and without distractions. “I guess it made us be brutally honest,” Brie says. “You are forced to chat things out and communicate better … There’s nowhere to hide when you’re on FaceTime.”

And having uninterrupted time together in lockdown is special, too, Luke says: “It allows all the daily noise to stop … and the focus to be on each other.”

A new survey of 2000 Australians, by dating website eHarmony and non-profit relationship services provider Interrelate, finds that 90 per cent of couples’ say their relationship has remained stable or improved since the pandemic began. Of those, more than half are having more open conversations and feeling a stronger emotional connection.

Among couples with children, almost half feel closer to their whole family, and a third say they learnt more about their partner as a parent.

It’s also sped up some relationships, with one in 10 couples who had been together for under a year now looking to marry, buy a house or have a child. Meanwhile, singles are less keen to waste time on casual relationships, with four-in-five ditching the idea of flings.

Psychologist and eHarmony relationship expert Sharon Draper says it is surprising but encouraging to see such positive survey results.

Draper explains that social restrictions have forced couples to lean in to each other, leading some to spend more quality time together and bond through adversity. The pandemic has also offered a sense of perspective.

“It’s about being grateful for what you do have, or recognising what you feel you don’t have and addressing that,” she says. “It’s forced us, often in a nice way, to have difficult conversations rather than just avoid them.”

But, Draper adds, there are many couples doing it tough and questioning their future together, as the pandemic has magnified any issues that existed beforehand.

“Those problems can be really overwhelming if we don’t know how to work on them,” Draper says.

Relationships Australia NSW chief executive Elisabeth Shaw says there has been a 30 per cent increase in demand for the organisation’s counselling services since the pandemic, with similar rises in other states.

In busy pre-pandemic times, if something was bothering you, you could put off having a difficult conversation, Shaw says. These days, problems are a lot harder to ignore, with the pandemic illuminating any cracks. Plus, there can be pressure from other challenges, like losing work.

It’s why there is a “real split” with partnerships suffering or thriving.

“It requires good communication skills and courage to raise things and to have the confidence that doing so can make things better,” Shaw says.

“Unfortunately some couples have a history of raising things [and] getting them into hot water.”

Her advice is for people to be self-aware, because the toll of the pandemic can lead us to snap prematurely.

“Be very careful that the irritations you experience [about your partner] are real,” she says. “Were they there before the pandemic, or arising because you’re seeing too much of each other?”

She also recommends bringing up issues promptly. “It’s better to clear the air. And if your partner finds something irritating, do your best to accommodate that rather than be defensive,” she says. “That doesn’t mean you do everything your partner wants, but be prepared to negotiate so you can live with each other.”

It’s also important to continue connecting with friends and family because a partner can’t meet all your needs, Shaw says.

Sharon Draper recommends couples go for a walk when they want to discuss something difficult, and says couples can improve their communication by making space for their partner to talk, and actively listening and engaging.

“We tend to jump in and try to fix someone’s issue because we hate anything that isn’t positive … but all our emotions are equally important.”

Tags: after, and, Brie, Luke, Met, months
You may also like
Celebrities News