Hunchbacked and wide-necked with a ‘text-claw thumb’: Grotesque model ‘Mindy’ reveals what humans could look like in the year 3000 thanks to our reliance on technology

For many people, a moment without your phone or laptop in sight can feel like a lifetime.

But a terrifying model may encourage you to spend less time with your devices.

Researchers have created a grotesque model called ‘Mindy’, which they say provides a glimpse at what humans could look like in less than 800 years as a result of our reliance on technology.

With a hunched back, wide neck, clawed hand and even a second set of eyelids, Mindy ‘could be the human of 3000 and beyond’. 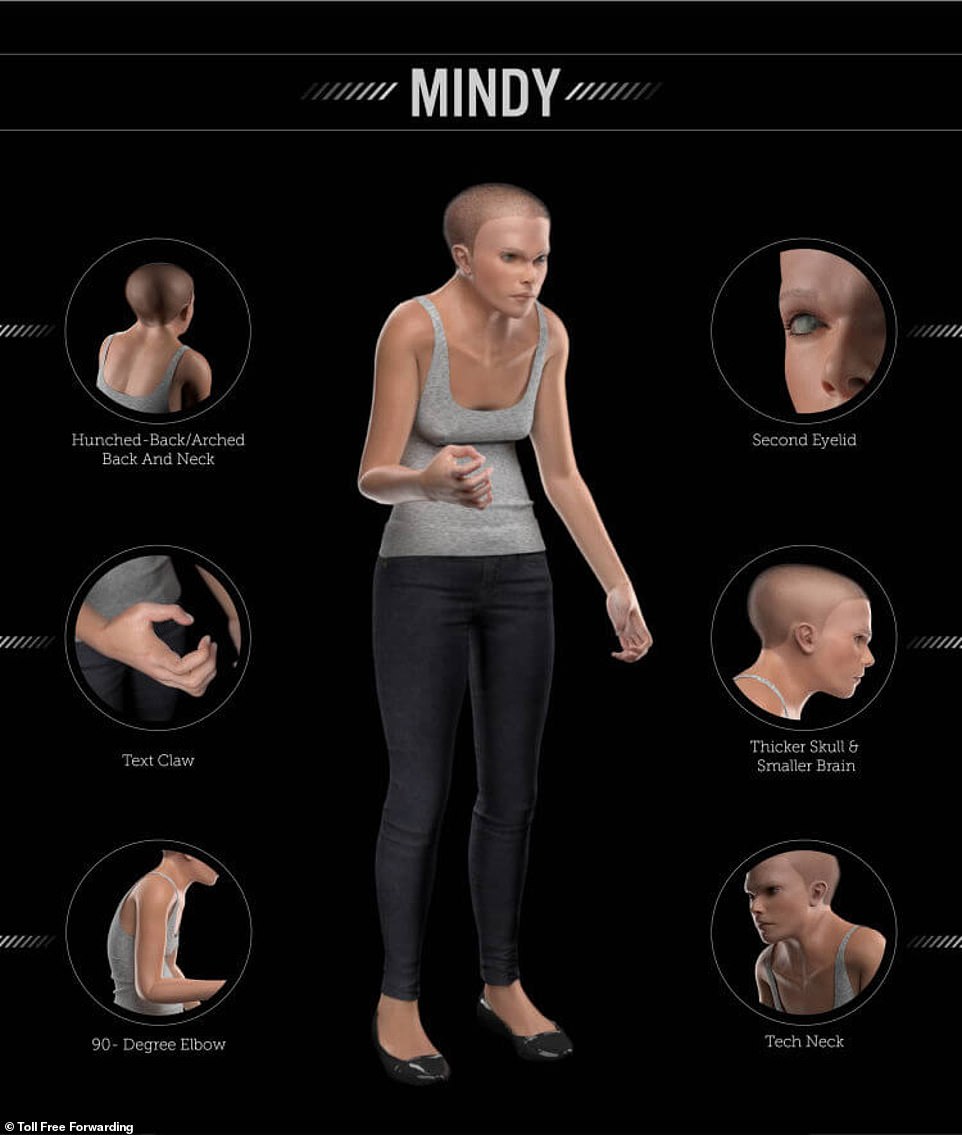 Researchers have created a grotesque model called ‘Mindy’, which they say provides a glimpse at what humans could look like in less than 800 years.

A glimpse into the future? Mindy’s defining features

Mindy was created by Toll Free Forwarding as a way of visualising how technology affects our bodies.

‘We sourced scientific research and expert opinion on the subject, before working with a 3D designer to create a future human whose body has physically changed due to consistent use of smartphones, laptops, and other tech,’ it explained.

Years of looking down at our smartphones or up at computer screens will result in hunched posture, according to the model.

Meanwhile our hands will be permanently moulded into a claw shape after consistently gripping our smartphones.

Speaking to Toll Free Forwarding, Dr Nikola Djordjevic from Med Alert Help explained: ‘The way we hold our phones can cause strain in certain points of contact – causing “text claw”, which is known as cubital tunnel syndrome.’

As well as ‘text-claw’, humans could experience ‘smartphone elbow’ – a permanent 90-degree angle caused by the typical positioning of the arm when holding a device.

‘Keeping the elbow bent for a long time – most often, while holding your phone – can stretch the nerve behind the elbow and put pressure on it,’ Dr Djordjevic added.

Hours looking down at our phones will not only result in hunched backs, but also thicker necks, according to the model.

‘When you’re working on a computer or looking down at your phone, the muscles in the back of the neck have to contract to hold your head up,’ explained Dr. K. Daniel Riew from the New York-Presbyterian Orch Spine Hospital.

‘The more you look down, the harder the muscles have to work to keep your head up.

‘These muscles can get overly tired and sore from looking down at our smartphones and tablets or spending the majority of our working day on computers.’

Other grotesque features we can expect include a thicker skull and smaller brain, as well as a second eyelid to prevent excessive exposure to light. 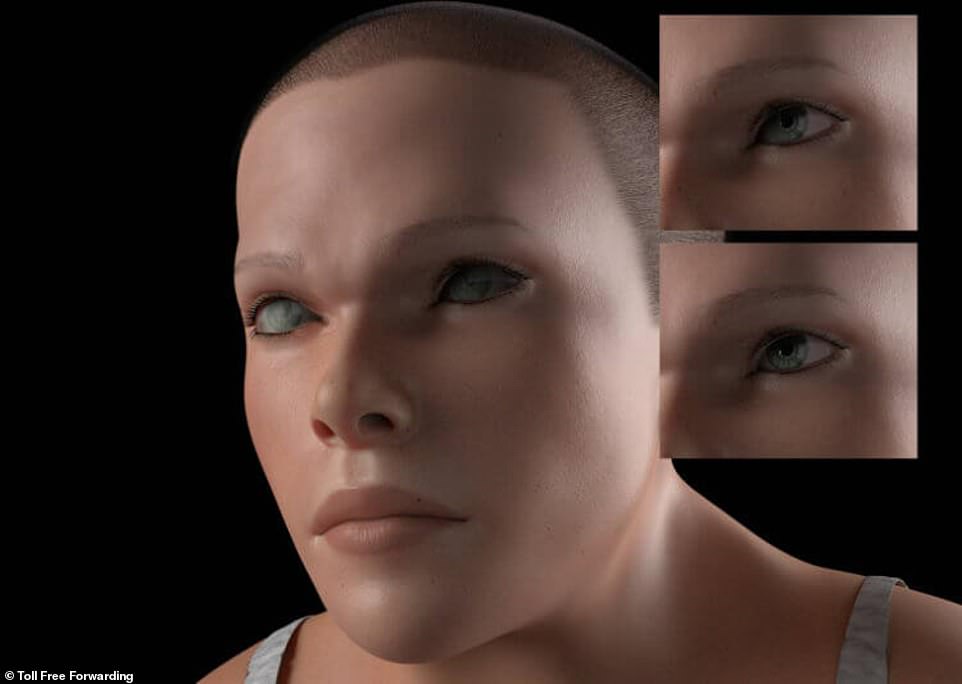 Other grotesque features we can expect include a thicker skull and smaller brain, as well as a second eyelid to prevent excessive exposure to light

‘Humans may develop a larger inner eyelid to prevent exposure to excessive light, or the lens of the eye may be evolutionary developed such that it blocks incoming blue light but not other high wavelength lights like green, yellow or red,’ said Kasun Ratnayake from the University of Toledo.

Mindy is the successor to Emma — the sickly work colleague of the future — who was built in 2019 to highlight the importance of good workplace conditions.

Emma was cooked up by researchers after interviews with more than 3,000 employees about their health issues and concerns.

She has a permanently hunched posture sitting for hours every day over her desk, dry red eyes from prolonged exposure to a computer screen and sallow skin for spending years trapped under the glare of artificial light.