The great paw-scape! Woman reveals her friends thought she ‘was crazy’ for claiming her ‘Houdini’ cat could open doors – until she filmed him in the act

A pet owner has been left stunned after her ‘Houdini’ cat learned how to jump and pull handles using his body weight to open doors.

Amy Kennedy, 33, from Chester in Cheshire, was branded ‘crazy’ by friends when she claimed her furry feline Simba could open doors – until she finally caught him in the act.

The nursery manager lay in wait and filmed the canny cat leaping into the air, wrapping his paws around the handle, before pulling it down.

She suspects Simba had been doing it for months because he’d often appear in her room in the middle of the night, despite having been shut in downstairs. 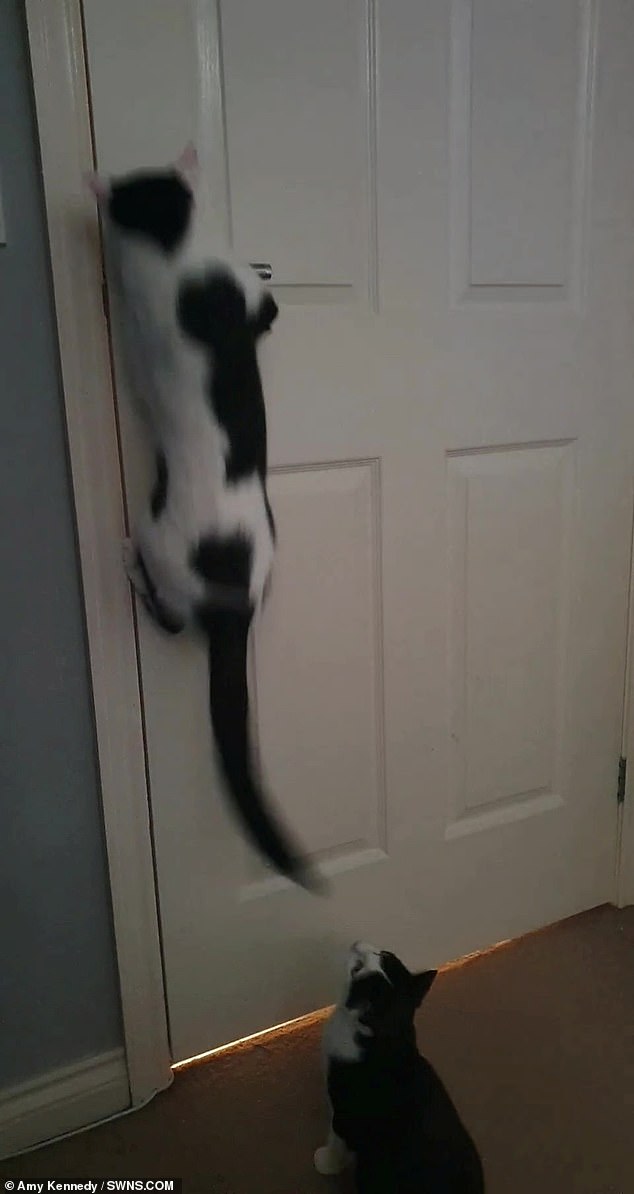 Amy Kennedy, 33, from Chester in Cheshire, was stunned when she discovered her cat Simba had learned to open doors. Pictured: Simba and Nala 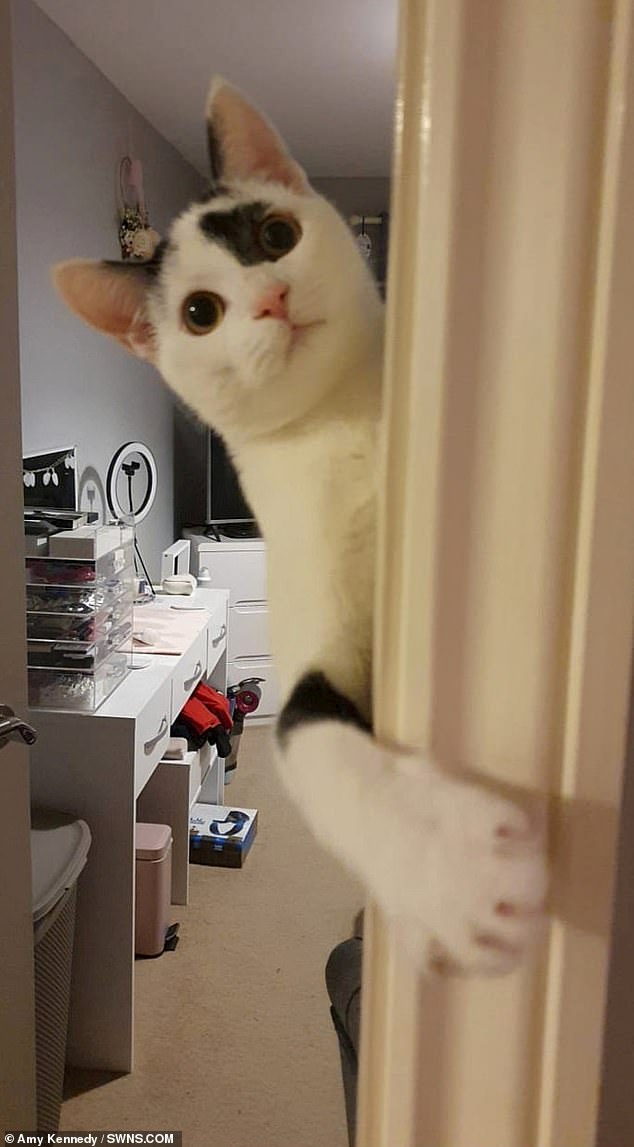 The nursery manager lay in wait and filmed the canny cat leaping into the air, wrapping his paws around the handle, before pulling it down (pictured) 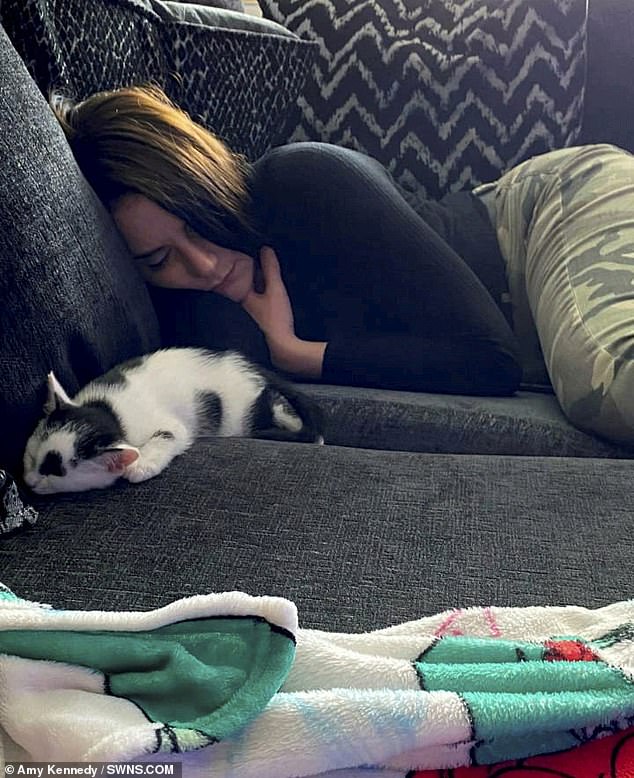 Having been called ‘crazy’ by friends, Amy captured evidence of Simba’s abilities earlier this month. Pictured: Amy and Simba

Amy finally filmed definitive evidence of Simba’s athletic shenanigans on January 9, as he attempted to leave her room.

She adopted siblings Simba and Nala, both seven-months-old, in July last year – but said she never expected them to open doors.

‘Lots of people tell you what to expect with cats but I never thought they’d learn to open the door,’ explained Amy. ‘They’re very clever and very cheeky.’

‘Simba’s been doing it since four months, but I never caught him in the act. At night I could always hear banging and thud, and wondered what it was and thought it had to be them crashing about.

‘But then he started appearing in the bed. I didn’t know how he was doing it, but I was shocked. You start doubting yourself because you wonder if you shut the door. 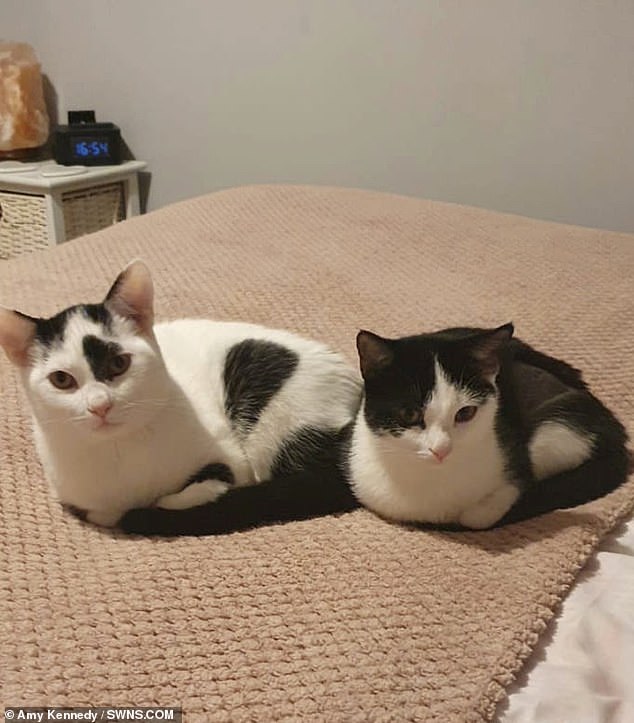 Amy said lots of people told her what to expect from cats, but she never thought they would learn to open doors. Pictured: Simba and Nala 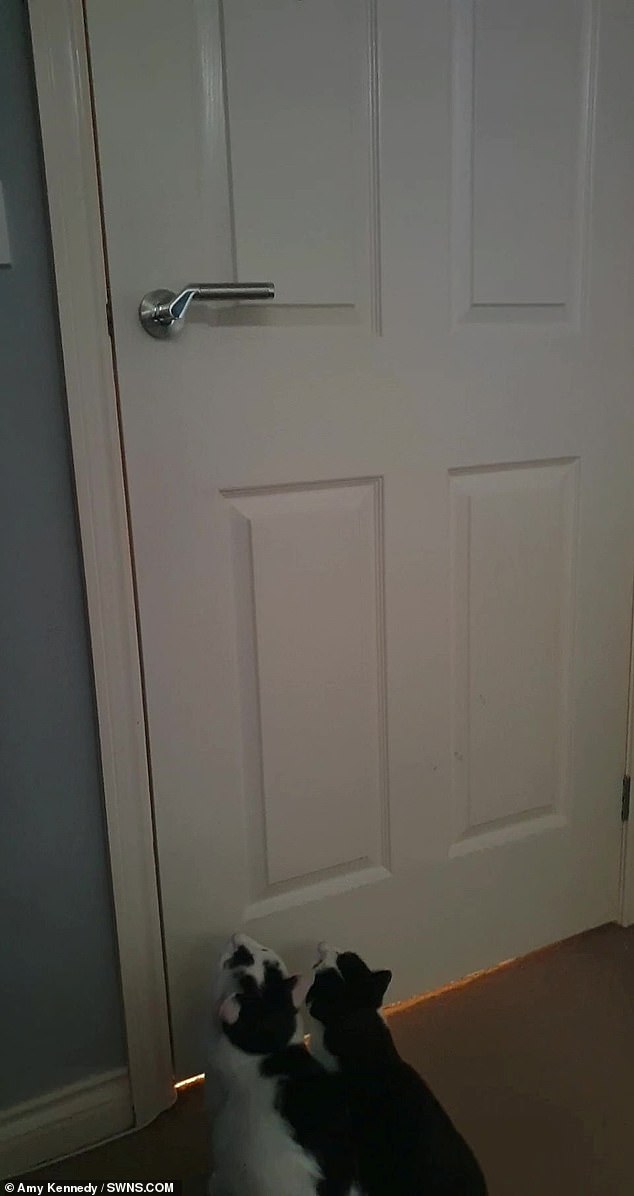 Amy admits she began doubting if she was closing the door because Simba started appearing in her bed. Pictured: Simba and Nala

‘He wanted to get into the living room, and he was just watching the door so I sat there waiting with my camera waiting.

‘He wraps his paws around the handle cause I’d always been wondering how he does it. No one believed me but now I have evidence. I’m not a crazy cat lady.’

The moggies usually sleep in the living room, where their beds are, but Amy claims shutting doors is now pointless because they’ve acquired this new skill.

She said that despite their young age, both cats now have the run the house. 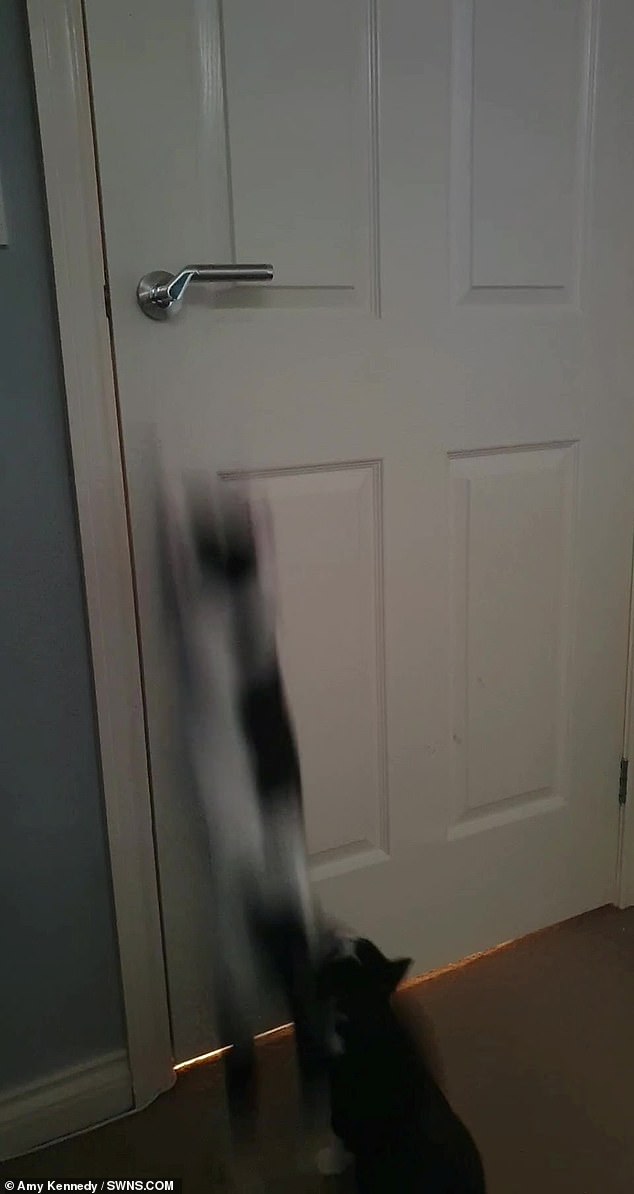 Amy filmed Simba’s shenanigans by waiting with her camera for when he wanted to go in the living room. Pictured: Simba and Nala 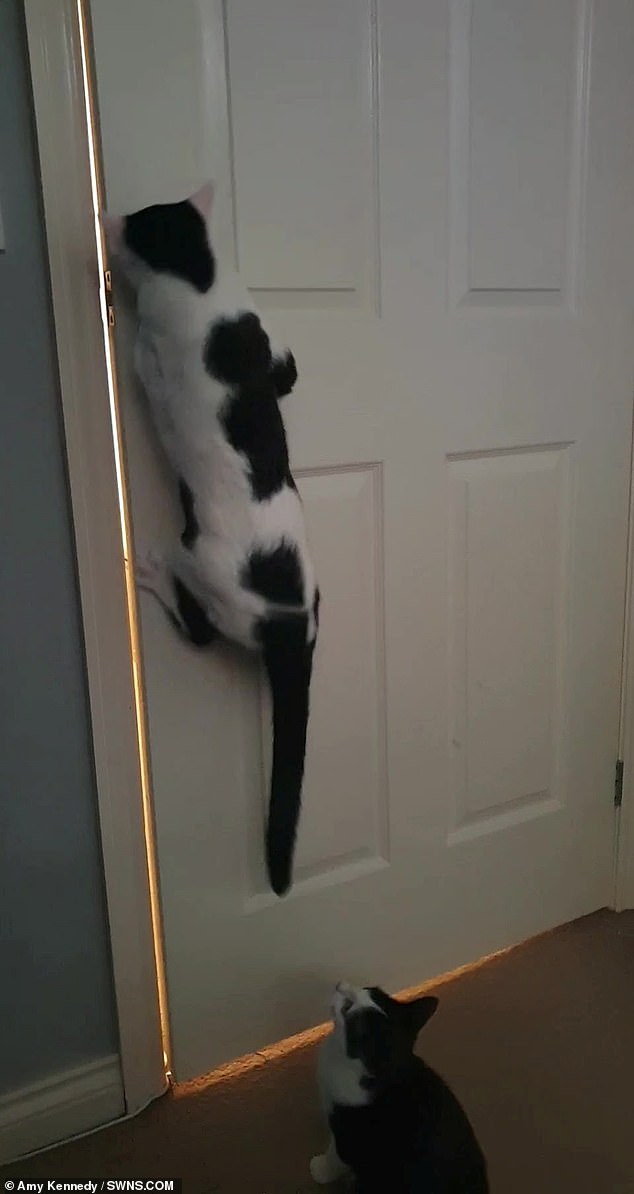 Amy said there’s no point closing the doors since Simba has acquired the new skill. Pictured: Simba and Nala

Amy added: ‘I think he just wants to stay with me at all times. He used to cry at the door but he’s worked out that he has to jump and push to open the door.

‘He’s very happy with himself once the door comes open, making an appearance. He’s quite smug, just starts purring.

‘She used to run through first and he would hold back, it was a bit dramatic.

‘I just keep the doors open as it’s just pointless.

‘I live by myself. So it’s nice to let them free roam. But it’s quite clear that they’re in charge of the house now.’ 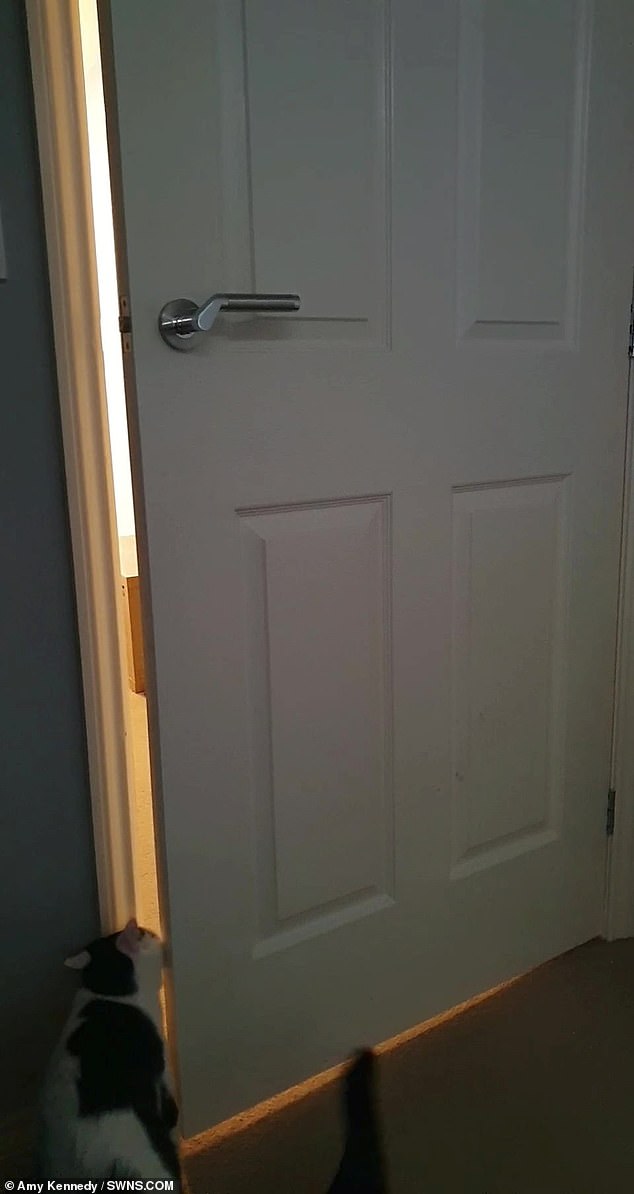 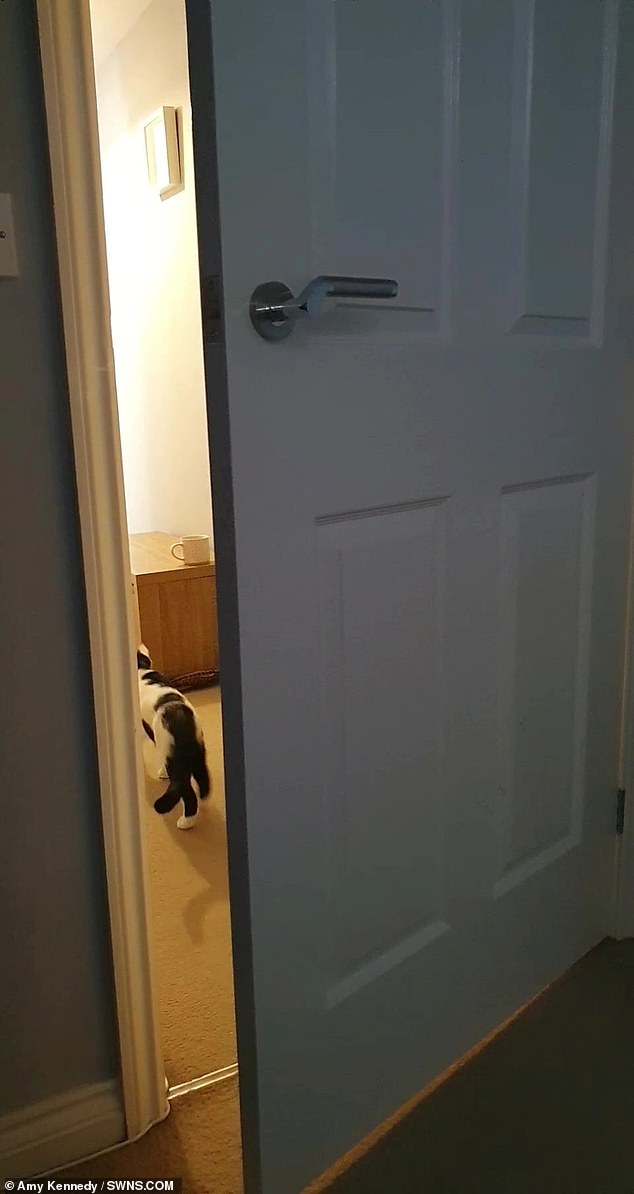