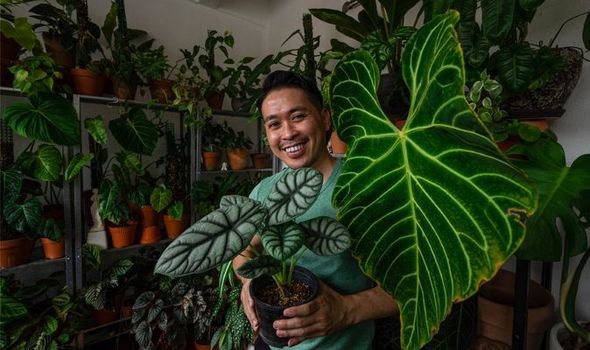 And of the 44 percent who speak to their plants, almost four in ten ask if it needs a drink.

More than a quarter have cursed an object for not doing its job, such as a tin opener not working, while 24 percent have shouted at their alarm clock to shut up.

Nearly a fifth have pleaded with their car to keep going when it’s low on fuel, and more than one in ten have thanked a cash machine for giving them their money.

It also emerged that six in ten have been caught talking to an inanimate object – with 60 percent of those being laughed at as a result.

A spokesman from TheJoyOfPlants.co.uk, which commissioned the survey, said: “Communication with humans and even other animals is human nature, but it’s funny to see so many people talk to things that can’t hear us.

“Saying “thank you” to a cash machine does really show how polite us Brits can be.

“I can see how chatting to pets can be seen as a two-way conversation, but it’s endearing to see how many people natter to their plants as if they were part of the family as well.”

The research also found one in five adults talk to their plants at least weekly, with eight percent chatting to them on a daily basis.

Almost four in ten think speaking to plants helps them grow, while another 37 percent feel happier after a conversation with a shrub.

More than four in ten of those who chat to plants even consider it to be a two-way conversation, with its movements and growth seen as a response.

“You need a drink”, “you’re getting big” and “you’re not looking your best” were found to be the top comments people make to their plants.

And 57 percent admit they talk in a “loving” tone.

Nearly one in five adults polled, via OnePoll, have also played music to their plants, as they believe it helps them grow more – with classical, electronic and R&B the most popular genres.

Michael Perry, a houseplant expert who is working with TheJoyOfPlants.co.uk, said: “The data for this goes as far back as Charles Darwin in the 1700s, who recognised vibrations encourage plants to grow.

“You don’t even have to talk directly to plants – as long as you’re having conversations near them, they’re going to be enjoying those vibrations and it will benefit them.

“When it comes to vocal tones, many feel low, bass-heavy voices are best – but in fact, plants respond most strongly to voices in the 115-250hz range.

“This can also be applied to music. It’s often seen to be classical music that is best for plants, which is reflected in the survey results – but actually, due to classical music featuring so many different frequencies, this isn’t always the case.

“It’s funny that 59 percent have been “caught” talking to their plants, and considered strange – is talking to a plant any worse than talking to a dog or a cat in a silly baby voice, just because it can’t move? Not in my book.

“It’s also nice to point out, it’s a symbiotic relationship – those plants are making us feel good, relieving stress, and allowing us to focus and improving our mood in a meditative way. You could almost liken plants to being a pet themselves in that way.”