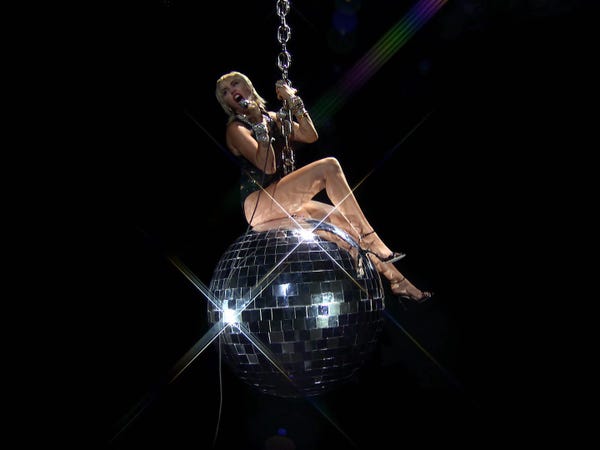 Miley Cyrus performed her newest single, "Midnight Sky," at the 2020 MTV Video Music Awards in a pre-recorded video that was aired on Sunday night.

This year, the singer was nominated for three VMAs: best art direction and best editing for "Mother's Daughter," as well as song of the summer for "Midnight Sky."

On Instagram, the 27-year-old singer gave fans a behind-the-scenes look at the sheer top she wore during her performance of "Midnight Sky."

She shared four photos of her VMAs look in a post that she captioned "BTS @vmas."

The star showed off her long legs in a black thong and accessorized with gold and silver bracelets, rings, and necklaces, including one with a large silver cross. She also wore a red lip color, similar to the makeup look featured in her music video for her new single.

Fans commented on the star's outfit change that was featured in her VMAs performance.

"And the best legs award goes to Miley Ray Cyrus," another commented.

Cyrus' metallic top wasn't her only sheer outfit of the night. On the red carpet for the awards show, the singer was pictured wearing a see-through Mugler dress covered in tiny mirrors.

Cyrus' giant disco ball moment from her VMAs performance was a nod to her iconic "Wrecking Ball" video from 2013, and fans seemed to love the star's allusion to her growth.

Many believed that "Wrecking Ball" was about her breakup with her former ex-boyfriend Liam Hemsworth. The star has confirmed that "Midnight Sky" — which was released on August 14 — was partially inspired by her divorce with Hemsworth.