Former England captain Mike Atherton says he hopes Haseeb Hameed will go “from strength to strength” at Nottinghamshire after the opener’s strong start to the county season.

Hameed scored 111 and 114 not out last week against Worcestershire, setting a new record of 635 balls for the most deliveries faced in a single County Championship match.

The 24-year-old fell for a duck against Derbyshire on Wednesday but followed it up with 94 in the second innings, neatly summarising a roller-coaster career that includes three Test caps for England against India in 2016.

Hameed left Lancashire in 2019 following a dramatic drop in form but is on the comeback trail after being made vice-captain at his new county over the winter.

“A chance to start again and start afresh with a new set of players and a different set of eyes from a coach in Peter Moores and just try and re-set his career.

“I think he got to a stage at Lancashire where his form had been so poor for so long; he’d made so many changes to his game, tinkering around.

“I follow Hameed a lot, obviously, because I’m a former Lancashire opener and therefore you feel an affinity or an affection for somebody who is coming after you.

“I watched him and he was making so many changes to his game that I think he almost lost a sense of what previously had felt natural and instinctive to him.

“So I think the change is a good thing and hopefully we’ll see him go from strength to strength.

“I’ve always felt that if you play as well as he did on that India tour a few years ago as an 18-year-old, it’s there, it’s in you and it will come back eventually given the right time and the right circumstances. So fingers crossed for him that he can come again.”

Hameed scored 31 and 82 in his first two Test innings, and added another half-century in the third Test on England’s tour of India in 2016, but thereafter his performances fell away. 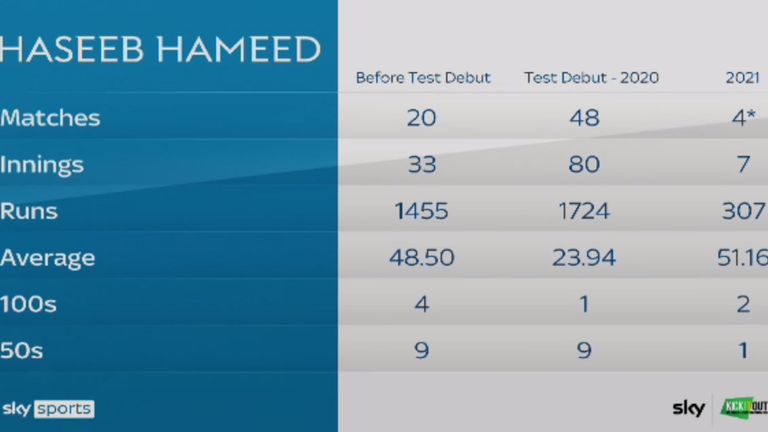 “He kept snapping his fingers and having serious injuries, which always sets you back,” reflected former England skipper Nasser Hussain.

“His stats look like those of someone who got into international cricket and found it a little bit too demanding and then faded away. But he actually just played like an international player.

“I noted on that tour that he went and saw a lot of the Indian greats; he was sat with Virat Kohli and MS Dhoni.

“I just looked at him and I thought ‘just be careful here. You’ve had a good tour, enjoy your success, don’t try and make it too important’.

“I’m speaking from experience here myself. Batting and cricket – you can make them a little bit too important. Yes, do your research and your prep but also enjoy the journey.

“That’s what he’s said; his move to Notts and playing under Peter Moores in a new environment means he’s actually learning to enjoy the journey and not make it too important, whereas in the back of your mind you know that it is something you want to be successful at.”