A micro-forest of 30 species of critically endangered eastern suburbs banksia scrub has been unveiled, one of four artworks installed by the City of Sydney to reactivate some of the city's near-deserted laneways.

Four artists have been granted up to $50,000 to create artworks to enliven people's experience of the CBD during the Sydney Festival and in time for the post lockdown return of workers. 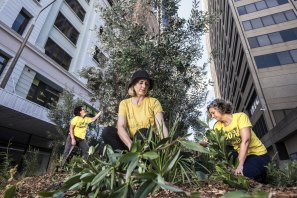 Installed last week, the experiential artworks will be in place for six months until July.

That will be time enough for 11 tree banksias to mature in the new Barlow Street forest, the kangaroo apple shrubs to flower, and the beehives to store the pollen collected by the sugarbag stingless native bees that have supped on the biodiverse pocket.

The forest project is a collaboration of artists, landscape gardeners, and nurseries under the auspices of the Dirt Witches collective.

The methods borrow from Japanese botanist Akira Miyawaki who founded a movement when he discovered dense copses bursting with biodiversity could transform small patches of urban wasteland.

These miniature forests are blooming in all parts of the world, a rapidly growing solution to improve biodiversity and cut carbon emissions in big metropolises.

The Barlow Street Forest sits near Central Station on a plot eight metres by 13 metres in the middle of a dead-end street. The plants are all native banksias to Australia's east coast, artist Caroline Webb says, endangered by land clearing, overdevelopment, and the popularity of ornamental gardens.

In the few days that it has been established, project coordinator Vivienne Webb said, the forest has brought the local community together, with neighbours offering water access, and multiple inquiries about its permanence.

"As an environmental statement, we went to really think about what plantings can do to mitigate the environmental crisis we are in," she says.

"As an art project it relates to the conceptual art movement in terms of putting ready-made materials into a different context – it goes back to Marcel Duchamp."

In Wilmot Street, Rochelle Haley has also used nature as her inspiration, with a suspended light display to remind visitors of the cycle of life and the rising and setting of the sun. In Barrack Street, Adam Norton has mounted prophetic giant badges on lamp posts, drawing on archival materials from apocalyptic science fiction films, pop culture, and counterculture.

In Abercrombie Lane, between Pitt and George streets, is an interactive fortune-telling video installation featuring a pink furry ghost wearing a crown and green shoes. The viewer waves their hand across a motion sensor that prompts the oracle to draw from a 48 card deck that comes with its own riddle from which the person can interpret.

Artist Katy Plummer said the installation, We Are All Astonishingly Wise, tapped into the public quest for certainty during times of upheaval and chaos.

Lord Mayor Clover Moore said the four commissions were funded under a $20 million COVID-19 recovery plan to support local businesses and artists and create jobs across the summer.

"While we must continue to be vigilant against Covid-19, including following health advice, wearing masks and staying home and getting tested if unwell, many office workers and visitors will return to the city in 2021," Ms Moore says.

"These works will transform many people’s daily experience of our city and add an element of surprise, humour, and intrigue."

The collective will water, weed, and clean the Barlow Street Forest during the next six months.

''There is a budget to remove it, but I'm certainly hoping it could linger longer. It's over to council really," Webb says.

Tags: 'Micro-forest', City, over, takes
You may also like
Celebrities News