For many of the artists and venues in this year's Asia TOPA festival in Melbourne, the spread of the novel coronavirus couldn't have been more badly timed.

The triennial festival of performing arts, spread over three months from January to March, features acts from across the Asia-Pacific region. As travel bans, flight cancellations and misinformation accompanied the virus' spread, artists were left scrambling to make it to Melbourne in time for their shows.

Some did not make it. 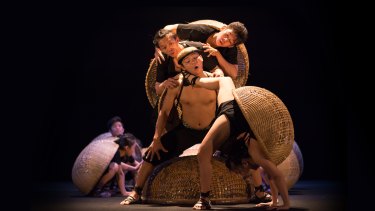 But while Australian toilet paper sales might suggest a paranoid local response to the outbreak, Melbourne audiences have proved they have intestinal fortitude. Organisers report the festival is close to achieving its budgeted box office with more than three weeks of events remaining, and is comfortably on track to beat its targets.

Last Saturday, more than 15,000 people turned up to shows at Arts Centre Melbourne, with countless others attending performances elsewhere in the city. There was barely a face mask in sight.

“The response to Asia TOPA has been completely thrilling,” says creative director Stephen Armstrong. “In the last three weeks, Melbourne has turned out to see artists from 17 countries and regions in performances across the city, and more than half of these performances have been new works created specifically for Asia TOPA.”

The festival is one of the major entries in Melbourne's cultural calendar, offering 179 performances across 37 different shows and events. The festival's organisers also added 63 public programs including talks, workshops and free outdoor performances.

Arts Centre Melbourne alone has sold almost 48,000 tickets to Asia TOPA events, so it would have been a major blow to artists and organisers alike if ticket holders had sought refunds or not shown up to performances. But full houses across the festival suggest no-shows are at a minimum.

The demand for tickets has in fact been so hot that a surprising number of ACM events have sold out, including Vietnamese bamboo circus spectacle A O Lang Pho, Ilbijerri/Te Rehia Theatre collaboration BLACK TIES, MTC's Torch the Place and Japanese noisemakers Boris with Merzbow.

Other venues across the city have reported their own shows selling out, including Dancehouse's Matou and Pollen Revolution, Abbotsford Convent's What Happened in Shanghai and Double Delicious, Arts House's Are You Ready to Take the Law into Your Own Hands and La Mama's Hades Fading.

Not everyone escaped the ongoing impact of coronavirus, however. The travel bans have meant that some Chinese artists (and others who have recently passed through China) have had to postpone their showings in Australia. These include multimedia artist Lu Yang and some of the music acts that had been programmed for the Nocturnal x Asia TOPA mini-festival at Melbourne Museum.

The Australian premiere of What is Chinese? – a digital performance installation by Shanghai artists Xiao Ke and Zi Han tracing the Chinese diaspora around the world – was also forced to reschedule when the performers were kept out of the country by Australia's travel ban. Organisers offered refunds to ticket holders, but said the performance would happen "once circumstances permit".