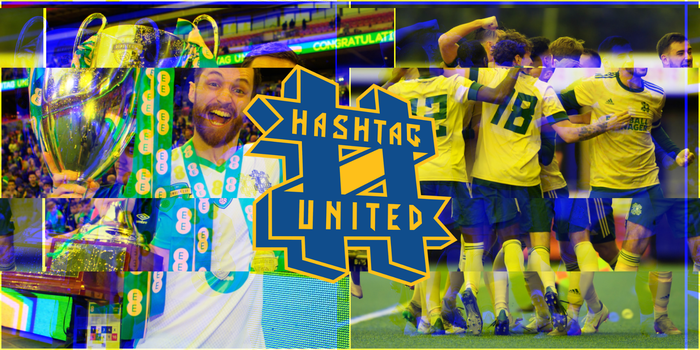 That's exactly the story behind Hashtag United, an English semi-pro team climbing both the footballing pyramid, and the YouTube subscriber charts.

Hashtag United might play in the ninth tier of English soccer and have a stadium with just 300 seats, but it's got more subscribers to its YouTube channel than Atletico Madrid, RB Leipzig, and Benfica.

On Instagram, the club has 476,000 followers, which is more than four English Premier League teams – Brighton, Burnley, West Bromwich Albion, and Sheffield United.

"I think we are symbols of a movement," Spencer Carmichael-Brown, the club's principal founder, told Insider. "We represent, or try to represent, the modern day football fan that has grown up watching YouTube and with social media."

In 2013, Spencer, better known as Spencer Owen, had made a name for himself online as the "Fifa Playa" – a masked gamer who would play, and more often than not, beat, other YouTubers and professional soccer players at EA Sports' FIFA.

After un-masking and all but killing off his disguised counterpart, Spencer continued to post, now as himself, to his channel and small army of followers, though it was no longer just FIFA content.

In 2015, he launched a series known as the Wembley Cup, which saw him, alongside his brother Seb, put together a team of YouTubers to take on another team of online stars at Wembley.

The team would be known as Spencer FC.

The event became annual and began to include ex-pros such as Steven Gerrard, Robert Pires, and Patrick Kluivert, and by 2017, when Spencer FC had changed its name to Hashtag United, over 34,000 people turned out to watch.

"It was kind of like Soccer Aid but for YouTubers," Spencer said.

"After that, I wanted to do more filming of football games on my YouTube channel, however we realised we can't do that with celebrities or YouTubers every week because it's just not sustainable.

Spencer and Seb's family chipped in to get the team off the ground too. Their father became the club's physio, their mother ran the hospitality side of things, their younger brother, Saunders, filmed the games, and Spencer's fiancee, Alex, ran the social accounts.

"It helped that I had a YouTube channel that was already established, but Hashtag became its own thing in its own right."

After starting in Sunday League — the equivalent of a recreational league in the US — and continuing to film and upload its games, Hashtag made the step up to the Eastern Counties League Division One South, the 10th tier of English soccer, in 2018.

The switch meant an overhaul of the club's squad, including Spencer, who stepped down from his role as player-manager.

Among those to sign for the club was former West Ham United and Queens Park Rangers defender Tom Williams, who helped Hashtag win the league in only its first season, earning promotion to the Essex Senior Football League.

Williams is now a coach after being forced to retire through injury.

"I haven't been at any other non-league sides, but I'm pretty confident there is no one else out there like us," Williams told Insider. "There are a lot of eyes on us."

Highlight's of Hashtag's matches regularly get as many as 400,000 views on YouTube, while thousands more watch its games live on Twitch, where Spencer and Seb provide commentary.

"In games at our level involving two other teams, you'll often get like 8-0s and 10-0s, or teams that haven't even got a full bench. But everyone plays us, and it's their cup final. It's crazy, it's sort of their big chance to impress us when we play them.

"We have no games where it's just a walkover, because every team knows it's an opportunity to show themselves against probably the best team in the league that is going to move forward, as well as the exposure they get from playing well against us.

"We've got used to it now though, and what it has done is make us raise our levels. We can't have an ounce of inconsistency."

The future is bright for the Tags

Last year, Hashtag was second in the Essex Senior Football League and on course for a second straight promotion when the division was brought to a halt by the global coronavirus pandemic.

Fortunately, however, it has picked back up where it left off, winning nine of its 11 league games so far this term, propelling it to the top of the table. The league has now been forced to pause again thanks to a second lockdown in the UK, but it will likely restart in December.

Hashtag also enjoyed a marvelous, dramatic run in the FA Cup, reaching the second round of qualifying before eventually being beaten on penalties by sixth tier Braintree Town.

Spencer nor Seb have any intention of stopping the club's rapid rise anytime soon.

Spencer continued: "We are still winning the vast majority of our games and probably would have been promoted last season if it wasn't for the season being curtailed.

"So I definitely think we need to level up at least a few levels higher with our current set up. We are just a better team than the league we are at, and I don't mean any disrespect to the other teams, it's just a process that we are all on as a new team."

Aside from the first team, Hashtag has grown to boast over 40 teams and 400 players at various other levels including boy's, girl's, and women's. The latter's first team is particularly thriving, currently playing in the fourth tier of the English pyramid.

The club also has the backing of one of the Premier League's most accomplished players in Chelsea's Cesar Azpilicueta, who was appointed to the club's board in April.

"As one of our directors, [Cesar] owns part of the club, so we want to try and make sure that we are exploiting that opportunity as best as we can in regards to bringing people in that want to help further our journey," said Spencer.

"We've got tremendous support, a tremendous club following, but if we want to kick on and do what this club really could achieve, with this fanbase, there is only one league that's got that fanbase, it's called the Premier League.

"How do we get there? Right now, the way it's set up, we need hundreds of millions of pounds. We don't have that. If anyone listening has, give us a call."