Could this stay-at-home mother oust the last dictator in Europe? MARK ALMOND analyses the turmoil in Belarus following the controversial re-election of Alexander Lukashenko

The timing could not be worse. As leaders in the West focus on the Covid crisis and its aftermath – spikes, second waves and the economic downturn – a political crisis with far-reaching implications is brewing in Belarus.

Sandwiched between Putin’s Russia and Poland – in effect on the eastern edge of Nato – Belarus is the size of Britain but with a population of less than 10million.

It is also a trip-wire for diplomatic and military conflict between the Kremlin and the West. And perhaps never more so than now as the nation turns against its leader of 26 years, Alexander Lukashenko (pictured below). He has gone from a wildy popular and democratically-elected president to the man now dubbed Europe’s ‘last dictator’.

After patent vote-rigging in an election judged to be ‘neither free nor fair’ by the EU on August 9 and in which he claimed to have gained a risible 80 per cent of the vote, people took to the streets in protest. 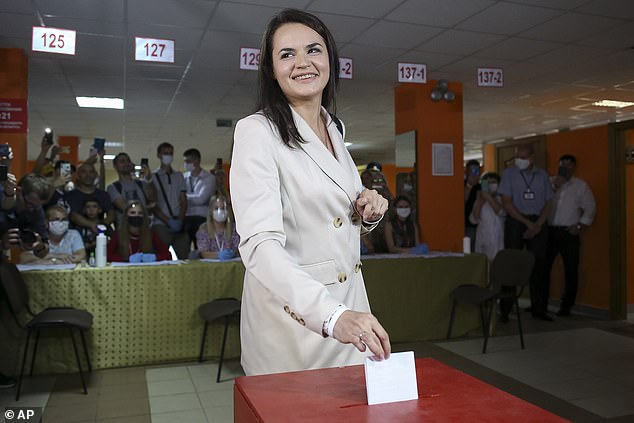 After the week-long protests, Svetlana Tikhanovskaya is confident enough to be asserting her right to be regarded as the election winner

In response, Lukashenko let loose his riot police on the crowds – mainly young people born after he was first elected in 1994. Live bullets were used and savage beatings meted out.

But this has not deterred a new generation who know only life under Lukashenko. On Sunday, 200,000 people gathered in defiance in central Minsk. He is refusing to back down. With army and police still loyal, he is determined to brazen it out, blaming ‘gangsters and junkies’ controlled from abroad – by which he means near neighbours and Nato members, Poland and Lithuania.

Intent on ‘internationalising’ the situation, Lukashenko has already dispatched reinforcements to the western city of Grodno, a sensitive meeting point of the borders of Belarus with the other two countries.

Provoking an incident there with Nato – which is conducting routine summer manoeuvres in the area – could trigger the military support from Russia Lukashenko craves.

Indeed, it is highly possible that the Kremlin and the dictator may be cooking up just such a plot to justify Russian intervention to ‘restore order’.

On Sunday, after phone calls between the two leaders, Moscow indicated it is ready to intervene. 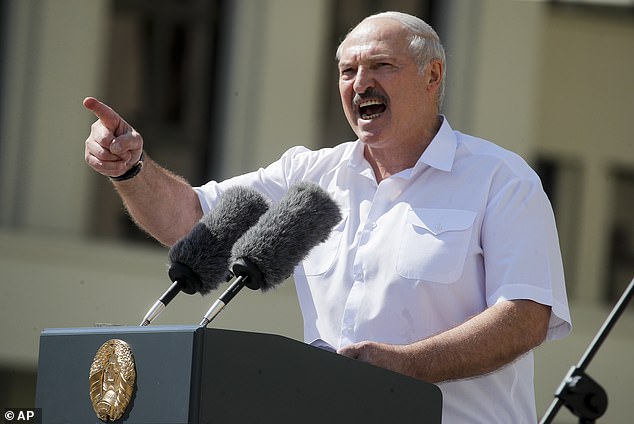 Vladimir Putin and Alexander Lukashenko don’t like each other, but the Russian president knows that if Lukashenko falls in a popular protest, there are many Russians who might say ‘We’ve had enough of you too’. So Lukashenko’s appeal to Putin is crude mutual interest: ‘If I fall, you’ll be next.’

Domestically, Putin can play up fears of a foreign invasion of Russia via Belarus – Moscow is only 400 miles to the East – as has happened before. Hitler came that way in 1941 as did Napoleon in 1812.

But in truth what Putin really fears is people power in Moscow, not Nato troops.

Certainly, the West could be dragged into conflict if Putin decides to play Belarus like a pawn in an East-West struggle for control. Lukashenko’s rise and potential fall is an object lesson in how power corrupts. An ex-state farm manager, he burst on to the political scene in 1994 after the collapse of communism as an ‘anti-corruption outsider’.

In the intervening decades, he has become a caricature of what he once denounced. He presides over a state-machine that insists on knowing what every citizen is doing. He issues orders on how to run everything from chicken farms to internet start-ups.

His ridiculing of the dangers of Covid while promoting cures such as a glass of vodka or visit to the sauna, made him a laughing stock. In reality, his rule is no joke. Lukashenko sees himself as embodying Belarus and regards criticism as a form of treason. What has enraged him particularly about the disputed election result has been the groundswell of support for his main rival – and the real winner at the ballot box – a 37-year-old mother of two.

The self-proclaimed ‘man of the people’ faced off against a housewife! He dismissed human rights activist Svetlana Tikhanovskaya as a ‘little girl’ and had her husband detained (and other candidates) to give himself a clear run. It was a miscalculation of epic proportions.

Following the election result and with her activist husband in prison and her children threatened with an orphanage, Tikhanovskaya was dumped by the KGB in neighbouring Lithuania. But after the week-long protests, she is confident enough to be asserting her right to be regarded as the election winner.

What she needs to do now, as risky as it may be, is return to Belarus to challenge Lukashenko on home ground. It will reinforce her moral authority and remove one of the few cards Lukashenko has left: his charge that ‘the little girl’ is a puppet in the hands of Lithuania and its Nato allies.

It is possible that Lukashenko’s rule will unravel too quickly for the above scenarios to play out.

But the West shouldn’t sit back and hope for the best as Putin and Lukashenko try to conjure up a diabolical solution to their Belarus dilemma. 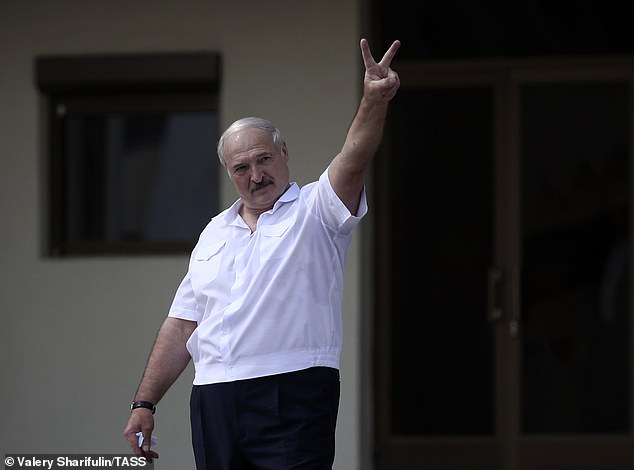 Putin may use force to back tyrant facing poll backlash

Britain and its allies yesterday piled pressure on Belarus’s embattled president by accusing him of a rigged election to cling on to power.

As hundreds of thousands of pro-democracy protesters took to the streets calling on Alexander Lukashenko to stand down, the crisis threatened to boil over into an international stand-off.

Russian president Vladimir Putin indicated he was ready to provide military support to prop up the man known as ‘Europe’s last dictator’. 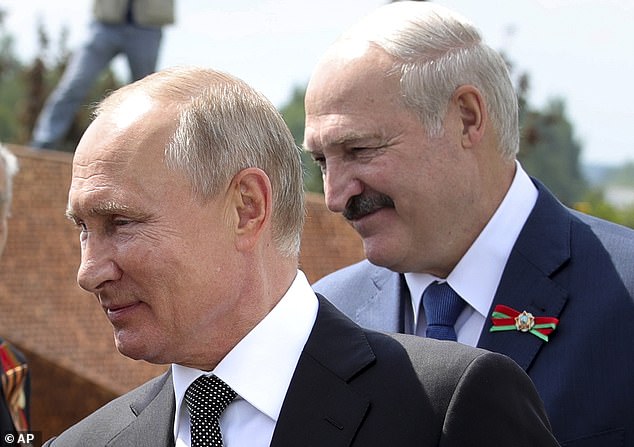 In the US, Donald Trump said he was watching the ‘terrible’ situation ‘very closely’ while the EU called an emergency summit of heads of state for tomorrow.

Nato chief Jens Stoltenberg said more than 5,000 troops based in neighbouring Estonia, Latvia, Lithuania and Poland were on standby to ‘deter any aggression’. More than 900 British and 850 American soldiers are among them.

In ex-Soviet Belarus yesterday, demonstrations continued for a ninth consecutive day over the August 9 poll.

But Mr Lukashenko was defiant as he warned: ‘There will be no new election until you kill me.’

He also indicated that his ally Mr Putin is ready to enforce a decades-old military pact with Belarus and provide assistance to crack down on the rebels. 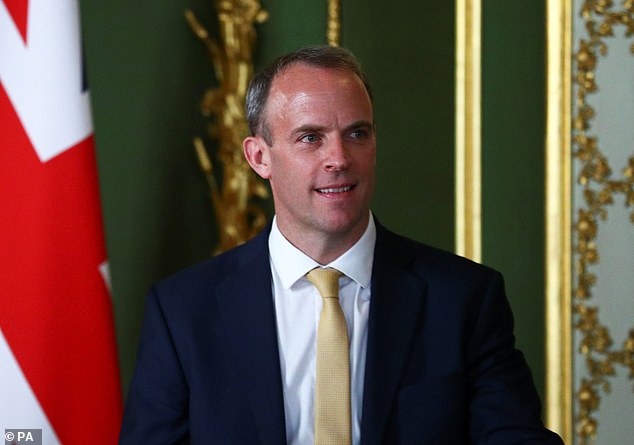 Kremlin sources have suggested Mr Putin will act ‘if necessary’. EU leaders fear Mr Putin may try to incorporate the landlocked nation into his vast empire.

Belarus sits in a strategic position, buffering Russia and Europe and hosting pipelines that carry Russian energy exports to the West.

Another theory is that Mr Putin – who has never forgiven Mr Lukashenko for publicly commenting on his divorce and relationship with gymnast Alina Kabaeva – may seek to impose his own solution on Belarus.

A Moscow source said Mr Putin could team up with Mr Lukashenko’s main challenger, Svetlana Tikhanovskaya, who is now in Lithuania.

They said: ‘He may try to work with Tikhanovskaya, as long as she agrees Belarus does not fall into the West’s orbit.’

Nato stressed troops have been stationed near Belarus since 2016 and are not there in reaction to the crisis.

Tags: ALMOND, analyses, I, Mark, turmoil
You may also like
Celebrities News