Man is left ecstatic after discovering a drawing he bought from a market stall in Ecuador for 73p is a piece by a British artist worth £10,000

A man was left ecstatic after he discovered a drawing he bought from a market stall for 73p is actually worth a staggering £10,000.

Santiago Taute, 39, paid just $1 for the colourful A3-sized work he spotted while browsing a market in Ecuador in 2001.

He rolled it up and stuffed it in a box that went into storage with his family in Spain when he moved to the UK in 2013, before marrying British wife Delia Taute, 31.

Delia, who is an art enthusiast, recognised it as the work of ‘sleep artist’ Lee Hadwin, who is known for painting in his slumber, and has sold a painting to Donald Trump for £100,000.

‘She recognised the signature, checked the website of the artist and he has now confirmed the drawing I bought for a dollar is one of his and worth thousands,’ Santiago said.

‘We are both very happy and shocked to find this out.’ 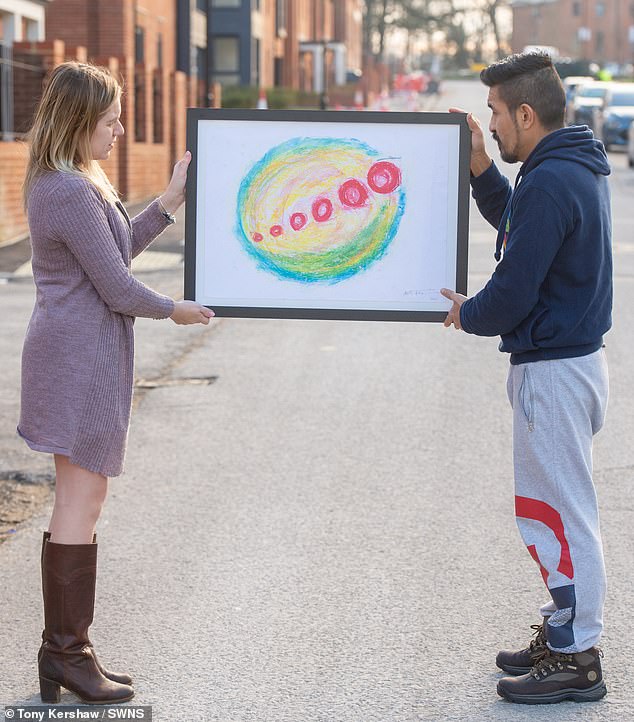 It remained in its box for two decades before being shipped to the UK recently where he got it out to show Delia when they moved home last year.

He has a rare condition that means he can paint incredible artworks while asleep and has made millions from his artwork.

Lee reckons he painted the work – called ‘Bolide’ – during a stint in Australia in 2001, but has no idea how it ended up in South America. 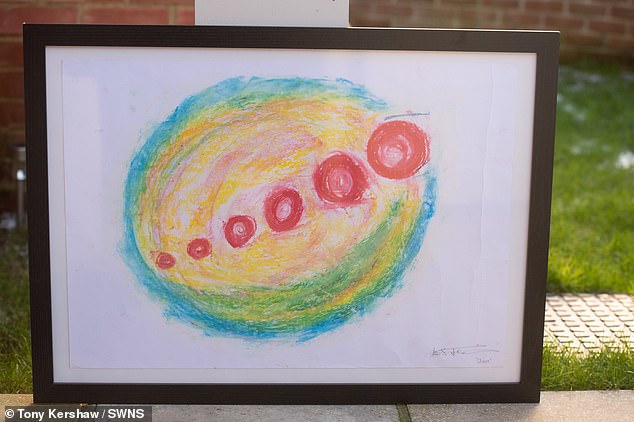 Engineer Santiago, from Equador, but now living in Aldershot, Hampshire, said: ‘I liked the look of the drawing because of all of the colours and ended up purchasing it for one dollar with a few other souvenirs.

‘I moved from Ecuador to Spain and then to England, leaving a lot of my belongings in storage in Spain as I was living in a small house and didn’t have the space.

‘I finally got all my boxes from Spain last year when we moved into a new home. I was taking things out of the boxes and found the painting so went to show my wife.’

Santiago had visited the Avenida Amazonas market in order to buy some souvenirs from his home country to take with him when he moved to Spain. 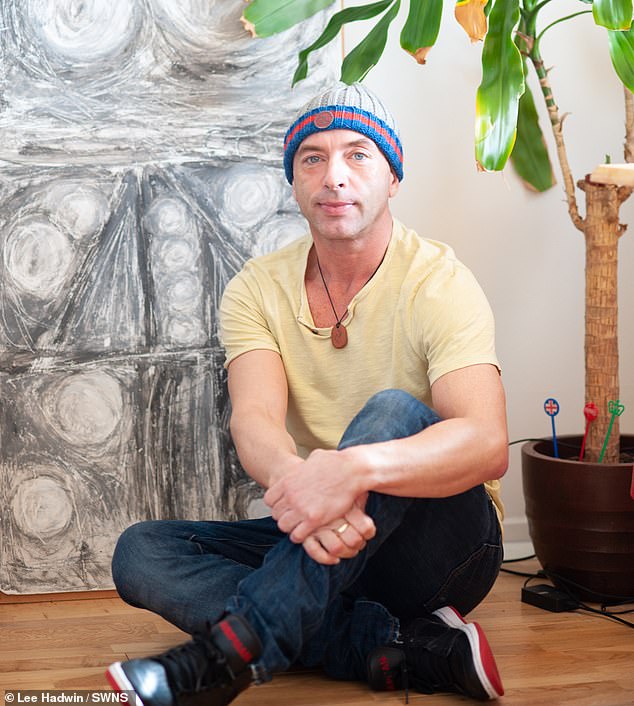 Lee, 46, (pictured) who was born in Wales and now lives in London is the artist of the painting that Santiago owns

Spotting the colourful drawing on sale for $5, Santiago haggled with the stall owner and managed to get the unique piece of art for just $1 before heading off for lunch with friends.

The colourful drawing was soon forgotten by Santiago in a box hidden away in storage when he moved from Ecuador to Spain and finally to the UK in 2013.

The couple recently moved into a new home together, and it prompted him to have a clear out, and he pulled the rolled up drawing out of the box to show Delia for the first time, in June 2020.

Delia, who works in sales and has always been passionate about art and regularly attends exhibitions, recognised the style of the drawing.

She first became aware of sleep artist Lee’s artwork after attending an exhibition hosted by Barclay’s in 2013, where his drawings were displayed.

She was fascinated by the unique work, which Lee creates whilst sleepwalking, and met the talented artist at the exhibition where they discussed his unusual art. 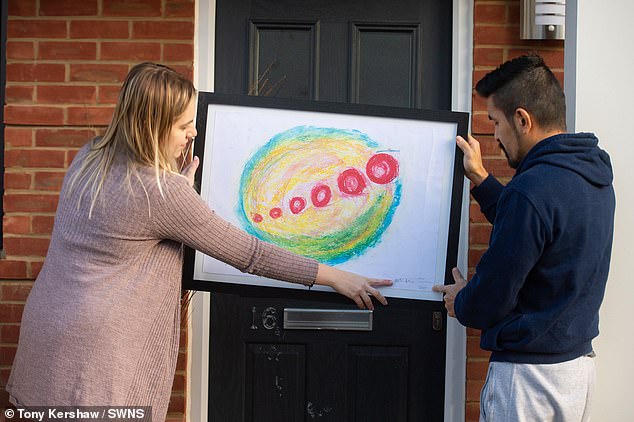 Delia visited another exhibition of Lee’s in Croydon two years ago.

She reached out to Lee and the artist has since confirmed that the piece was indeed drawn by him when he was living in Australia in 2001.

Delia said: ‘I thought it looked nice and colourful when Santiago first showed it to me, and then when I looked at it again when we were trying to figure out where to put it, I realised it actually looked familiar.

‘I spotted the signature and thought I recognised it as that of an artist I’d actually met who sleep draws. I went on his website and the signature was exactly the same.

‘I’d met Lee before so I contacted him through his website and sent him a picture of the drawing, explaining we’d bought it in a market and asking him if it was his.

‘Lee called me back and said that it was definitely his drawing – he was 100% certain.

‘He said he did it in 2001 when he was in Australia and he had no idea how it had ended up in Ecuador.’ 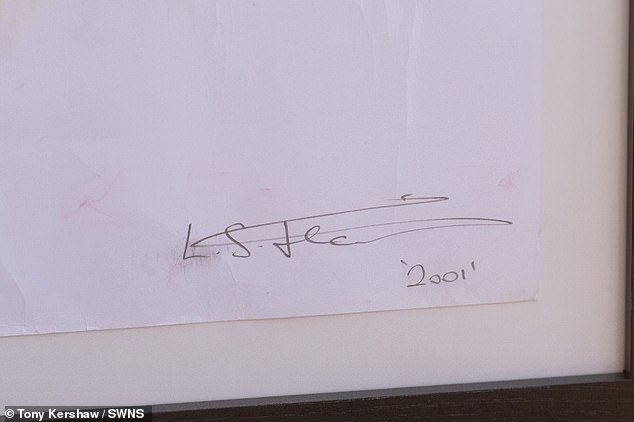 Lee’s drawing has been framed and takes pride of place in the couples’ new home.

Delia said: ‘It’s a one in a million story – I mean, how often do things like that happen?

‘I had a look on his website at some of his works from around those years and they all cost a little over 10k so I’ve taken that as a ballpark figure for now.

‘The value of the art is only going to up over the years so we are definitely keeping hold of it for now.’

Lee Hadwin was just a teenager when he discovered his unusual nocturnal talent of drawing and sketching portraits, figures and landscapes in his sleep.

With no artistic training, Lee is the only person that can only produce art whilst asleep and not whilst in a conscious state.

The talented artist draws or scribbles on walls, tables, clothes and discarded newspapers using pens, crayons, paints and coal to create his art.

His work over the years has become more detailed and profound, and his home is now more prepared with sketch books and materials scattered around his apartment.

Lee said: ‘I received a call from Delia a few days ago in regards to the painting in question and I can confirm that it is one of my pieces.

‘Upon close inspection – via the internet and as clear as I can get the painting up close on my computer system – it looks like an original and my old signature from back then. 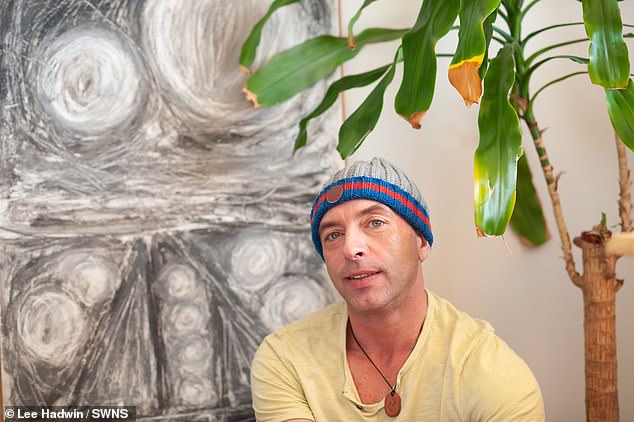 ‘I must say I am seriously shocked and stunned that the piece was purchased in Ecuador when the piece was done in Australia. How it has made it over to Ecuador is anyone’s guess!

‘I had, and still do, a lot of charity work so I can only think that the person has maybe come across it or been given it and it has ended up in Ecuador?

‘I am also shocked that it is here in the UK and a person who has been to my exhibitions has it!

‘Value wise, it is hard to say as it is an older piece. A lot of my older pieces sell for more especially with my old signature. I do a lot of works and sell via price on application which range in excess of 20k upwards to 6 figures.

‘I would say this piece has the approximate value of 8 – 10K. However, that depends on the person. If someone really likes and wants a piece, then they will pay!

‘I hope they just get enjoyment out of whatever they can from the piece.

‘I believe art is all about evoking feelings, nothing more, nothing less! I think people babble on way too much about what art is or should be. If you like a piece and it evokes a feeling, then buy it.’

Tags: bough, discovers, drawing, He, Man
You may also like
Celebrities News