Israel Folau's Catalans have fought all the way for their 30-14 win as they saw off a spirited Salford side who did not know when they were beaten.

Two late tries were enough for English Super League's French outfit as they were pushed all the way by the Red Devils on Saturday.

The Red Devils were punished early in this match as the Dragons put on a no-nonsense first-half performance. 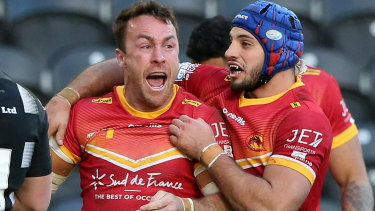 This time last year, Salford scored a stunning 46-0 victory but revenge was sweet for the Dragons with former NRL and Origin star James Maloney's inspired performance adding weight to their top-six aspirations, with Folau a support act – helping set up a try to Lewis Tierney.

Pre-match predictions of a Dragons rout were misplaced as Salford stuck to their script with Kevin Brown, Tongan Tui Lolohea and Australian Ken Sio providing a constant threat.

Michael McIlorum opened the scoring with a short-range try from dummy-half after six minutes, with Maloney adding the conversion.

Maloney put the Dragons further ahead when Salford prop Gil Dudson was penalised for interfering with the play the ball in front of the posts.

Then Matt Whitley chipped over the defence to touch down in the left corner. Whitley doubled up, collecting a Maloney kick over the line for his second try on the half-hour, with Maloney converting to make it 18-0.

Salford hit back early in the second half with a dazzling solo run from fullback Niall Evalds who stepped around Sam Tomkins to score on the right, with Lolohea adding the extras.

And Sio gave the visitors hope with a clever touchdown on the right corner flag before being bundled into touch.

But Catalans countered, forcing Salford into a series of goal-line drop-outs before the visitors were penalised for a high tackle on Tomkins.

Maloney took the two points to make the score 20-10 with 20 minutes to go.

Then Salford raised their hopes by taking advantage of a fumble from Tomkins for Sio to add his second on the right. Lolohea failed to convert to leave the game with a six-point balance.

Tierney struck the killer blow for Catalans with a dazzling midfield dash resulting in a try for his fellow winger Fouad Yaha.

Tierney got his own try following good work from Folau and Maloney's conversion rounded things off.

Tags: act, f, for, headline, Maloney, the
You may also like
Celebrities News