Two of the nation’s biggest lenders warn more mortgage pain is on the way, predicting the Reserve Bank will lift interest rates to almost 3 per cent by the end of the year in an aggressive bid to ease growing inflation pressures.

Westpac and National Australia Bank said on Friday they expected the RBA to lift the official cash rate to its highest level in nine years by December. 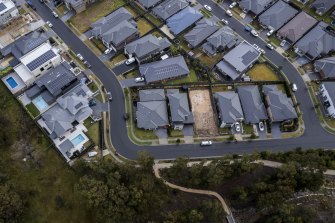 Major lenders are predicting the official cash rate will near 3 per cent by the end of the year.Credit:Brook Mitchell

Rate moves of this size would potentially add thousands of dollars a year to mortgage repayments, creating a political and economic headache for the federal government at a time when households are already struggling with cost-of-living pressures.

After saying it expected interest rates to remain steady until 2024, the RBA began raising rates just ahead of the May federal election. They are currently sitting at 1.35 per cent.

Westpac chief economist Bill Evans said he now expected the cash rate to reach 3.1 per cent by December and 3.35 per cent by February. The last time official interest rates were at 3 per cent or more was in 2013.

“Just as the [RBA] board overstimulated the economy in the face of the COVID threat, so it will be prepared to tighten to address what it perceives as the greater risk – losing control of inflation expectations at this time of rising inflation and very tight labour markets rather than fine-tuning the economic downturn,” Evans said.

NAB is forecasting a cash rate of 2.85 per cent by year’s end. The bank’s economists said the fall in unemployment to 3.5 per cent was “too large to ignore” and next week’s data was likely to show strong growth in inflation.

“Such a tight labour market – and other indicators of domestic capacity constraints from NAB’s business survey – points to ongoing domestic inflation pressures,” its economists said.

“The RBA can’t just hope that the (long-delayed and still uncertain) unwinding of global inflationary pressures will return inflation to target.”

Over a year, a household could end up facing an $18,100 lift in their repayments if Westpac’s forecasts prove correct.

Governments around the world are struggling to deal with the political fallout from soaring inflation and the response of central banks, which have started tightening monetary policy.

Treasurer Jim Chalmers, who is due to give parliament an update on the budget’s key economic forecasts next week, said on Friday the government could not “pretend away” the serious economic challenges Australia was facing, including rising inflation and falling real wages.

“We do have this genuine cost-of-living crisis in our economy,” he told reporters. “People are finding it incredibly difficult to keep up with the high and often rising costs of groceries and petrol and electricity and other essentials.”

Chalmers will make his economic statement the day after the Australian Bureau of Statistics releases the June-quarter inflation report, which economists are tipping will show inflation at 6.2 per cent – its highest annual rate since late 1990.

Commonwealth Bank economist Stephen Wu said prices for essentials including petrol and groceries would be the largest drivers of higher inflation.

“As households are less able to reduce consumption of these essential goods and services, and with real wages firmly negative, the picture for households is not positive,” he said.

He said a spike in next week’s inflation figures could force the RBA to move faster than expected.

“A big upward surprise could see the RBA move 75 basis points in August, though we think 50 basis points is more likely at this stage,” he said.