And the reunion special continues. While filming HBO Max’s Friends: The Reunion, host James Corden also filmed a segment for The Late Late Show With James Corden, which included a little bit of Carpool Karaoke.

In the video, posted on Wednesday, June 16, Corden, 42, picks up each of the Friends cast members while driving a golf cart around the Warner Bros. lot, the same lot where the sitcom was filmed.

Lisa Kudrow and Courteney Cox are the first to ask for a ride, followed by Matt LeBlanc and Jennifer Aniston and finally, Matthew Perry and David Schwimmer.

The Cats actor then turns on the Friends theme song and they all can’t help but sing along and laugh with each other.

“I’ve always wanted to do Carpool Karaoke,” Cox, 57, says during the clip while Kudrow, also 57, complements the group’s ability to harmonize.

After the segment, which also included Corden forgetting to put the brakes on when he parked the cart, the cast heads into Central Perk. Corden, meanwhile, walks around set and gets emotional.

‘Friends’ Cast From Season 1 to the HBO Max Reunion: Photos

“I feel more nostalgic than if I was going back to an apartment that I ever lived in,” he says during the bit.

Later, he joins them at the famous coffee house and asks some questions about what it feels like to be back on set.

“These five people right here mean the world to me. It’s really awesome,” LeBlanc, 53, says, before joking, “Not Schwimmer so much.”‘ 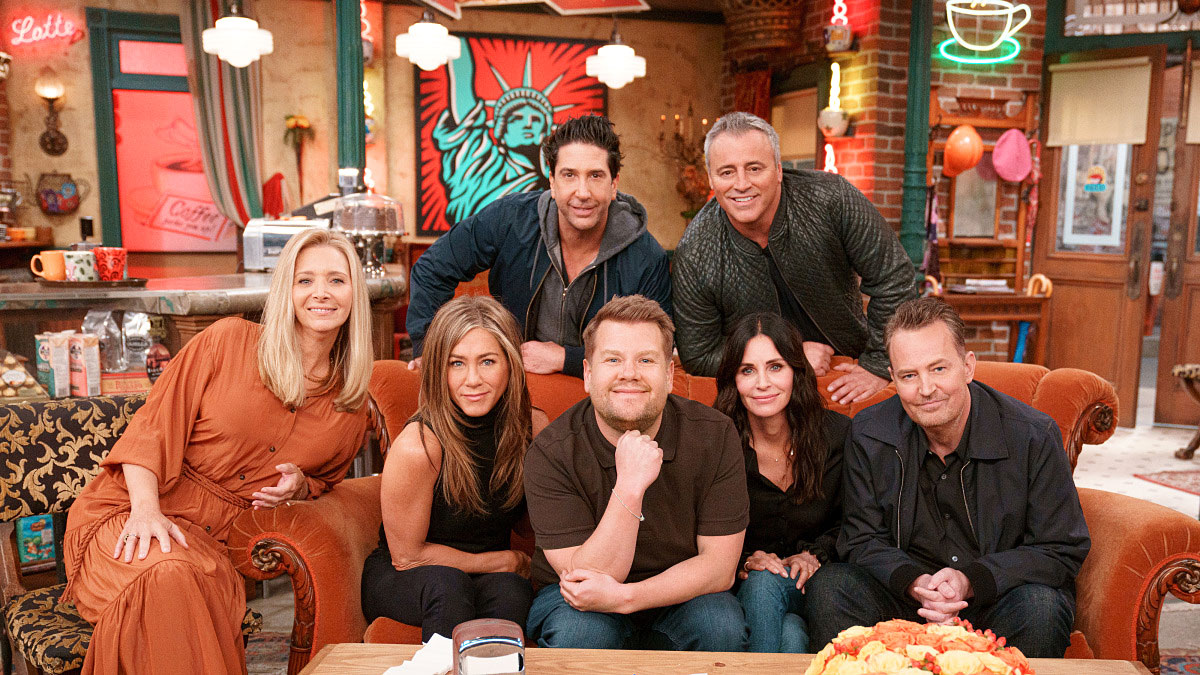 Corden also has the group play a game called “The Best Friends Test,” where they each have to point to the actor who best answers the question. First, he asks who broke down and laughed the most while filming.

True Love! Celebrities Who Found Best Friends in Their Costars

They all pointed to the Comeback alum. “I, the worst. I have no training,” Kudrow jokes, with Schwimmer, 54, adding, “But she’s also got the best laugh ever.”

The Joey alum then notes that Aniston, 52, is also in the running. “You laughed a lot,” he says, before reenacting how her character would put her hands in front of her mouth.

“If you watch the show, Rachel does this a lot,” he adds. “That’s Jennifer hiding her laugh. Just so everybody knows.”

Aniston also shares that she’s the one who stole the most wardrobe from the set. “I still wear it,” she admits, with Cox adding, “She still has so many shoes from Friends and outfits.”

“I would go into Monica’s rack and I would steal her [stuff],” the Morning Show star says.

Watch the full video above.

Tags: 'Friends&, LOL!, the, Watch
You may also like
Celebrities News