Each week, Benjamin Law asks public figures to discuss the subjects we're told to keep private by getting them to roll a die. The numbers they land on are the topics they're given. This week he talks to Leah Purcell. The 49-year-old author, playwright, actor, director, producer and filmmaker won a number of literary awards for her play The Drover’s Wife, which is now a novel and will soon be a feature film. 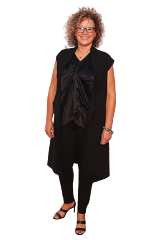 Leah Purcell: “We’ve still got generational issues about women wearing the pants and being the boss. Everything takes time, and it’s not going to be perfect, but as long as we’re making progress.”Credit:Getty Images

You grew up in Murgon, a lower socioeconomic part of Queensland. You’re also the youngest of seven kids to a single mum. How tight was money? Oh, money was very tight. Mum looked after her elderly mother for 27 years, then my grandfather, and lived on a sole parent pension. All my clothes were hand-me-downs. I didn’t ever get anything new from the shops until I was about 13, and even then it was a pair of jeans you had to save up for and put on lay-by.

Your mother died when you were 18, and you packed up your bags to chase acting at 19. You also had a daughter and were escaping a family violence situation. What was the plan for money? Oh, I didn’t even have one! [Laughs] It was just surviving. But I couldn’t have sat still and done nothing. If I wasn’t going to be doing something in performance, I thought I’d do something in sports, so I started studying aerobics instruction at home via correspondence. Later I got a job leading an aerobics class at a YMCA centre. I’d take my baby, encouraged other mums to do the same, and incorporated having children there into the fitness program.

Fast forward to 2017 and your play wins a total of $40,000 at the NSW Premier’s Literary Awards and a total of $125,000 at the Victorian Premier’s Literary Awards. What have you done with the prize money? [Laughs] Pay bills! We lived off it. We go from pay packet to pay packet in this industry. It also allowed me to sit down and focus on writing the screenplay for the film [adaptation of The Drover’s Wife] and have a bit of a break. Not that I could sit there for too long.

Is there anything that you are still a tight-arse about? Everything! Mate, I’m the tight-arse in my family. Funny thing is, in this industry, people think you make a lot of money, but every cent has gone back into my film. I’m the most broke I’ve ever been! [Laughs] So I think I’ll continue being a tight-arse. To produce your own films, you have to be.

The Drover’s Wife centres on the Aboriginal story marginalised in the Henry Lawson original. To what extent are the stories you tell inherently political? Well, they are because I’m a black woman. Aboriginal people: our way of life, how we’re looked at – it’s been all about politics. Whether I am trying to or not, it becomes political because it covers so many issues in black lives and black stories. In saying that, I would never set out to write something straight-up political. It’s not my agenda. But my grandmother is part of the Stolen Generations. My mother is part of a generation that was not allowed to participate in shared culture, language or stories. I’d hope I bring heart and soul to those issues.

How well or poorly is Australia doing in 2020 to ensure equality between Indigenous and non-Indigenous Australians? People are trying but the government needs to have another way of addressing Aboriginal issues. Of course, there are more Aboriginal figures in parliament now, but you need to come back and
talk to people on a community level. We need the message stick to be passed around.

You’ve got the name recognition. You’ve got the runs on the board. You’ve got the platform. Would you ever run for office? Oh, no way. Mate, the shit that goes on there! And as an Aboriginal woman in Canberra in that big white building? Nope, no way.

Have you ever been approached? Yeah, I have.

By whom? The Labor Party, and I’m a Labor girl. But it’s not my cup of tea. The way they carry on in Question Time! If I get in there, it’ll be when I run for president!

You’re the youngest of seven, so sex was happening around you. Were you taught much about it? Well, yes. I grew up in pubs, so I was the little girl sitting under the table, listening in. And I’ve very much loved, when I’ve had the opportunity, talking about women’s business with my daughter. Sex can be something wonderful, something enjoyed by two people who have freedom and trust. I’d make a good sex-ed teacher, I reckon.

Have the sexual politics of your industry changed? There’s still much more to be done to have equality of women in workplaces and high-powered positions, but we’ve seen a great change. The women who’ve spoken out; they’ve made all sorts of industries sit up and take notice. The change is happening to make sure everyone does feel safe. We’ve still got generational issues about women wearing the pants and being the boss. Everything takes time, and it’s not going to be perfect, but as long as we’re making progress.

What do you find sexy about your partner, Bain Stewart? I love his feet, his forearms, and his puppy dog eyes.

His feet? I like feet. And he’s got sexy feet: a high arch and toes in alignment!

What does Bain find sexy about you? Oh, he likes my asssssssss. [Laughs] It’s all about the booty. And my long legs and curly hair.

You said you’d be a good sex educator. Here’s your chance. What are the ingredients for good sex? Not being tired. [Laughs] No! Trust, lust, passion.

To read more from Good Weekend magazine, visit our page at The Sydney Morning Herald, The Age and Brisbane Times.

Tags: am, I, Leah, Purcell:, tr, whether
You may also like
Celebrities News