Labor is doubling down on electric vehicles to announce twice the funding that the Coalition has committed, but the hangover from a 2019 scare campaign remains, with the opposition ruling out several key measures advocates say are needed to grow the market share of petrol-free cars.

Labor committed $500 million to help grow the uptake of electric vehicles, while the Coalition has pledged $250 million under its Future Fuels Strategy. Both major parties are focusing their funding on increasing the number of charging stations to make owning an electric vehicle more convenient. 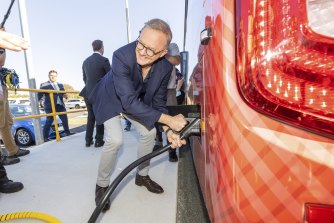 Opposition Leader Anthony Albanese with an electric bus during a visit to the Swan Transit Joondalup Bus Depot, in Joondalup, WA.Credit:Alex Ellinghausen

But since Prime Minister Scott Morrison mocked Bill Shorten in 2019 by claiming the then-Labor leader wanted to “end the weekend” by setting a goal for 50 per cent of new vehicle sales to be electric by 2030, Labor has been gun shy of targets and vehicle emissions standards.

The Coalition has ruled out vehicle emissions standards and late last year Morrison signalled his intention to double down on his warning to Australians that electric vehicle targets would force people to give up their internal combustion engines.

“Australians love their family sedan, farmers rely on their trusted ute and our economy counts on trucks and trains to deliver goods from coast to coast,” Morrison said in November when he announced the Coalition’s Future Fuels Fund. ”We will not be forcing Australians out of the car they want to drive or penalising those who can least afford it through bans or taxes.“

Soon after, Labor leader Anthony Albanese scraped a barnacle off the shipload of policies Shorten took to the previous election, and in December he said the opposition had ruled out changes to vehicle emissions standards.

However, he went further than the Coalition with a commitment to waive the fringe benefits and luxury car taxes that apply to the sale of many electric models, which are most often applied to commercial buyers, in a move designed to drop the purchase price and increase private business uptake.

Both major parties have said they would deliver their funding through the Australian Renewable Energy Agency, which would partner with private industry on new projects.

On the weekend Labor committed to build a national electric vehicle charging network, with stations located at an average interval of 150 kilometres on major roads. It has secured a pledge of $39 million from NSW’s NRMA to build the infrastructure, which Labor said would be matched with public funds.

Labor climate change and energy spokesman Chris Bowen highlighted Australia’s demand for clean vehicles, which is growing from a very low base.

“Australian homes and businesses are desperate to get their hands on electric vehicles and slash their transport bills,” he said.

The US, Europe and most other developed economies have vehicle emissions standards that set a quota for the volume of carbon dioxide that can be emitted collectively across the fleet of a manufacturer’s internal combustion engine cars.

Experts including the Grattan Institute and the Electric Vehicle Council say this measure is the most effective way to encourage manufacturers to develop new electric models. The transport sector generates more than 20 per cent of Australia’s total emissions and increasing uptake of pollution-free cars will be crucial to achieving the bipartisan goal of reaching net zero emissions by 2050.

Cut through the noise of the federal election campaign with news, views and expert analysis from Jacqueline Maley. Sign up to our Australia Votes 2022 newsletter here.