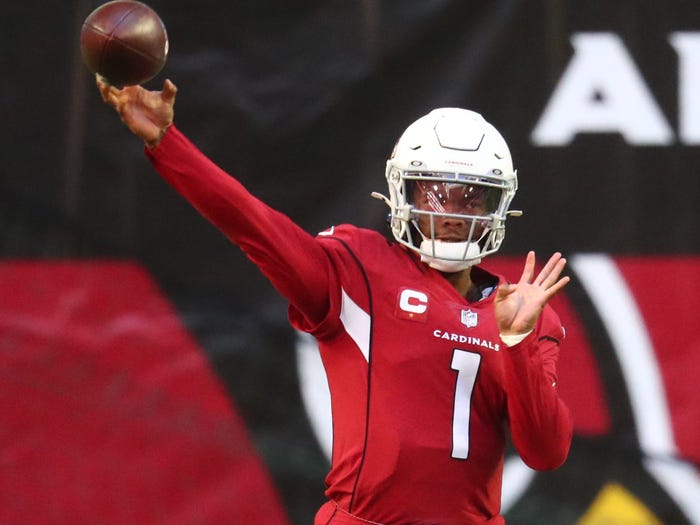 Kyler Murray has pulled off many impressive feats in his young football career, but a Hail Mary wasn't one of them until Sunday.

With the clock winding down in the fourth quarter of the Arizona Cardinals' Sunday afternoon matchup against the Buffalo Bills, Kliff Kingsbury's 23-year-old quarterback delivered a stunning 43-yard Hail Mary touchdown pass to superstar wide receiver DeAndre Hopkins to give Arizona the last-second victory.

While watching a clip of the play shortly after the game, Murray told NBC's Peter King that he had "never done a Hail Mary before."

"That's my first one," Murray said.

King attempted to clarify what the second-year dual-threat quarterback meant, asking if he'd ever "had one in high school, even."

Though he's still young, Murray has quite a stacked resume from various levels of football. His Allen High School squad won three consecutive Texas state championships. And Murray — who was named Gatorade Football Player of the Year during his senior season — boasted a perfect 42-0 record as a starter for the Eagles.

Murray moved on to back up now-Washington Football Team quarterback Kyle Allen at Texas A&M before transferring to Oklahoma, where he backed up Sooners legend Baker Mayfield. When he finally earned a starting nod from Lincoln Riley, Murray took full advantage of the opportunity, throwing for 4,361 yards and 42 touchdowns on the season. He earned the Heisman Trophy that season after leading Oklahoma to the College Football Playoff.

But of all the incredible moments of his illustrious career, Murray insists that Sunday's bomb to Hopkins takes the cake.

"Well, in high school, we had a lot of moments. Never like this one, though," Murray told King. "Last-second, I mean, this is the highest level. Hail Mary, last play of the game."

"I really have had a lot of moments in my life … but this one, none can compare," he added.

The Cardinals are currently in a three-way tie for the top spot in the loaded NFC West. They'll face off against Russell Wilson and the Seattle Seahawks — one of the fellow frontrunners of the division — on Thursday for a chance to take firm control of the NFC West and inch closer to the franchise's first playoff appearance since 2015.