It seems that a fantastical rendering of Kristen Bell became a harsh reality for Dax Shepard.

“Top Gear America,” a series about all things cars, aired an episode last week in which co-host Shepard decided to have an image of him and his wife painted on the side of a van.

The mural features a comically buff Shepard in a loincloth wielding a sword atop a slain dragon. Bell is also depicted in a loincloth, except she’s at her husband’s feet, clutching one of his massive thighs. 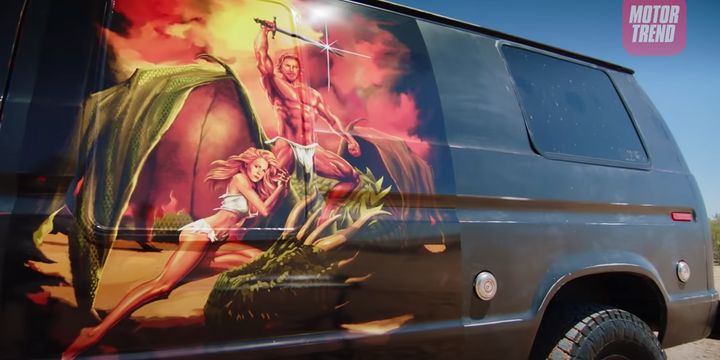 ″[The van] was inspired by ‘Breaker! Breaker!’ a Chuck Norris movie,” Shepard explained to the entertainment site PopCulture. “I’ve always loved those 70s muraled up vans. I’ve wanted one. And my wife is pretty adamant that’s the one vehicle she doesn’t want in our driveway.”

Yet it seems Shepard’s love for 1970s aesthetics wasn’t the only thing Bell had an issue with.

“But she wasn’t thrilled with the level of ‘female empowerment’ that was depicted in that mural,” Shepard admitted. “Understandably. And my kind of excuse was we had to honor the era in which this was popular. It didn’t fly.”

The famous couple has always been open about the difficulties they face in their relationship — including going to couple’s therapy.

In September, a month after Shepard revealed on his podcast “Armchair Expert” that he relapsed after 16 years of sobriety, Bell told Ellen DeGeneres that the two were returning to couple’s therapy.

“I will continue to stand by him because he’s very, very worth it,” she told the host.

Let’s just hope Bell brought up the mural during one of their therapy sessions and the two came to a compromise about it. And here’s hoping that the image of Bell is painted over with a picture of a sloth.