The survival in the wild of the world’s biggest lizard, the Komodo dragon, is looking less certain as its suitable habitat shrinks because of climate change and human pressures outside its protected areas in Indonesia.

That’s the conclusion of the International Union for Conservation of Nature (IUCN), a global authority that this weekend released its latest so-called Red List of threatened species. The list, which included the evaluation of more than 138,000 species, shifted the status of the Komodo dragon from vulnerable to endangered. 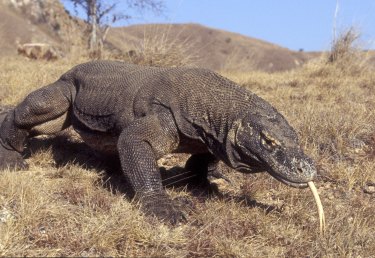 The world-famous Komodo dragon is among the species singled out by the International Union for Conservation of Nature as likely to face increased threats as the planet warms.Credit:IUCN

Rising sea levels caused by hotter temperatures melting ice and expanding oceans will reduce the dragon’s habitat on Komodo and neighbouring remote islands by at least 30 per cent in the next 45 years, the IUCN said at its World Conservation Congress gathering in the French city of Marseille.

The lizards, which can grow to three metres long, were only recorded by Western scientists in 1910, more than three centuries after Dutch colonists reached south-east Asia. As female dragons can reproduce without the presence of males – they have both male and female sex chromosomes – the process only results in male offspring and can lead to inbreeding.

“While the subpopulation in Komodo National Park is currently stable and well protected, Komodo dragons outside protected areas [on the island of] Flores are also threatened by significant habitat loss due to ongoing human activities,” said the body, which represents more than 1400 governments, NGOs and other groups.

The latest Red List assessed 138,374 species globally, finding more than 38,500 or about 28 per cent of them to be threatened with extinction. Among those at risk are 37 per cent of shark and ray species because of over-fishing, degradation of habitat and the effects of warming oceans, up from about 30 per cent from the previous Red List report a year ago.

The survey, though, did reveal some more positive trends, such as the finding that of the seven most-fished tuna species, four of them are showing some recovery signs as nations improve the enforcement of fishing quotas. 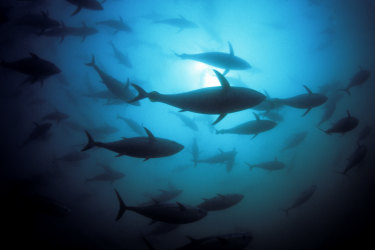 Southern bluefin tuna is farmed off South Australia. In waters elsewhere, the species is a prime target for illegal fishing. Credit:Getty Images

“These Red List assessments are proof that sustainable fisheries approaches work, with enormous long-term benefits for livelihoods and biodiversity,” Bruce Collette, Chair of the IUCN’s tuna group, said in a statement. “Tuna species migrate across thousands of kilometres, so co-ordinating their management globally is also key.”

According to IUCN data, the number of described species is estimated at 2.129 million, of which only about 7 per cent are evaluated. The assessment of vertebrates is much more comprehensive, at about two-thirds of described species, than plants at 13 per cent or insects at about 2 per cent.

“We know quite a lot about mammals and birds,” said Richard Kingsford, head of the University of NSW Centre for Ecosystem Science. “We know less about reptiles and even less about insects and plants.”

Conservation management, including by the IUCN, is increasingly surveying entire ecosystems.

“If we only look at a specific species, we miss out on all things that species depends on,” including food and refuge, Professor Kingsford said, adding the broader approach can assist conservation efforts. “What is it that makes these species threatened?”