In July, a US federal jury stunned the music industry by finding that Katy Perry's hit Dark Horse had infringed on the copyright of a Christian rap song, and the jury later ordered the pop star's team to pay $US2.8 million in damages.

On Tuesday (US time), the judge in that case made an equally surprising move by vacating the jury's decision, which means that Perry and her collaborators – including her longtime producer Dr Luke – are not liable for infringement and therefore do not have to pay damages. 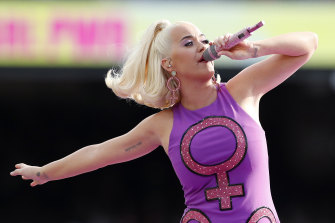 The suit, filed in 2014 by the artist Flame, whose real name is Marcus Gray, drew skepticism in music circles because it contended that Perry's Dark Horse – a No.1 hit from 2013 – had borrowed a simple eight-note pattern, known as an ostinato, from Flame's song Joyful Noise. (Gray further argued that his reputation as a Christian artist had been harmed by the "anti-Christian witchcraft, paganism, black magic, and Illuminati imagery evoked by Dark Horse.")

Christine Lepera, one of Perry's lawyers, argued at trial that such a basic sequence of notes could not be protected by copyright and that through his suit Flame was "trying to own the basic building blocks of music."

Perry's lawyers made a motion for judgment as a matter of law, which asks the judge to find that no reasonable jury could have come to its conclusion. The judge, Christina Snyder of US District Court in Los Angeles, vacated the jury's verdict, saying that the plaintiffs had failed to show that the two passages of music were objectively similar enough to count as infringement.

Much of the judge's decision rests on the question of what music qualifies as original material that can be protected by copyright. Flame's lawyers, and a musicologist who served as an expert witness, argued that there were numerous points of similarity between the ostinato in Joyful Noise and a passage in Dark Horse.

Perry's lawyers disputed whether the musical elements identified by Flame were substantial and original enough to be protected by copyright, and the judge seemed persuaded by their argument.

"The court agrees," Snyder wrote, "that the uncontroverted evidence points to only one conclusion: that none of these individual elements are independently protectable."

Snyder's ruling came just a week after a closely watched decision by a panel of judges in the 9th US Circuit Court of Appeals, in a copyright case involving Led Zeppelin's classic song Stairway to Heaven. Part of that case also involved questions about whether simple musical elements or patterns could be copyrighted, and the case – which found in Led Zeppelin's favour – was cited in Snyder's decision.

The Led Zeppelin ruling may affect another high-profile copyright case, over Ed Sheeran's Thinking Out Loud. That case had been set to go to trial last September, but the judge paused it pending the outcome of the Stairway to Heaven appeal.

Snyder's ruling may not be the last word on Dark Horse, however. At the end of her 32-page decision, the judge wrote that if an appeals court disagrees with her reasoning, then she "conditionally grants a new trial."

Tags: as, E, Judge, Katy, Perry, prevails
You may also like
Celebrities News