Former home affairs minister Karen Andrews and Tasmanian MP Bridget Archer have put up their hands for the deputy leadership of the Liberal Party, as Anthony Albanese prepares to be sworn in as prime minister.

The former minister was on Sunday coy about her interest in a leadership position but confirmed she would run for the deputy’s position when Liberal MPs next meet. 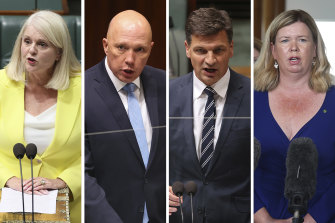 But on Monday morning Andrews told Brisbane radio station 4BC she is interested in “what role will allow me to add the most value”.

“I’m going to consider my position over the next day or so,” she told listeners, adding that she will “certainly” canvass the position of deputy.

The Queensland MP added that the electorate wants climate change issues “dealt with and dealt with in a sensible matter”.

Archer, a Tasmanian MP who has previously crossed the floor to support debate on independent MP Helen Haines’ proposed national integrity commission, said she remained a member of the party “because those [liberal] values, those historic values, mean something to me.”

“I will fight to protect them and to restore them,” Archer told Radio National’s Breakfast program.

“That’s why I still remain within the party. So that means that I have to play my part in that and I have to be prepared, as do others, to stand up and say so as we move forward.”

Discussions about Scott Morrison’s replacement as Liberal leader began within hours of the polls closing on Saturday evening, with the next opposition leader facing the difficult task of rebuilding the party after nine years in government and a historic wipeout of moderate MPs.

Peter Dutton has told colleagues who have been ringing him and urging him to stand that he expects to announce his candidacy in a matter of days.

His message to colleagues, according to MPs who had spoken to him but asked not to be named so they could speak freely, is that the opposition has to take a sensible approach to policy and there should be no “night of the long knives” recriminations over the election loss.

On Sunday Archer said she was worried “about the ideological environment that we are in generally”.

“I think politics over recent years, both in Australia and overseas, has become increasingly ideological and increasingly tribal. It’s not a position that I support and in fact, the most important piece of advice that I was given when I was first, and has stuck with me, was don’t be an ideologue and I think that’s the most important thing,” she told ABC television on Sunday afternoon.